The Pains of Creation

Purported to be a mega art event, the Triennale instead bares the rot in the Lalit Kala Akademi 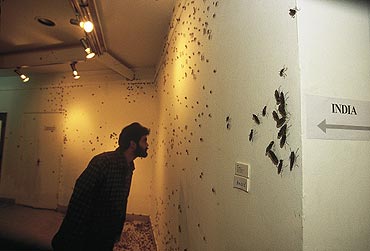 outlookindia.com
-0001-11-30T00:00:00+0553
If art is reflective of reality, then the blackouts at the press conference that punctuated pro-tem chairman Sarayu Doshi's grandiose plans for the Millennium Triennale were apt pointers towards the disarray at the Lalit Kala Akademi. Simply put, the 10th Triennale which started on January 22—arguably India's biggest art congress to gauge emerging global trends—is a slipshod show, at best patchy, made worse by total organisational chaos.

Displaying over 300 works of art from 30 countries at three venues (in New Delhi) requires sound management and meticulous planning, instead what confronts the visitor is the absolute lack of it. With preparations for the event starting as late as October, it has been glitches all the way, giving the director, Nand Katyal, relentless anxiety pangs. "It's too short a time to organise things the proper way," he confesses. The Triennale is, however, just a manifestation of the malaise that plagues the Akademi. Even senior artists scoff at the state of affairs at the Lalit Kala and summarily dismiss it as a clique that's wasting government resources.

With its politicking, it's no wonder that the Triennale went into a steep decline, both in terms of quality and content. "Younger people are calling the shots and their values have deteriorated. The focus is now more on the person rather than on his paintings," feels Ram Kumar, senior artist. Manjit Bawa is more categorical in blaming the Akademi for the fall in standards. "It's a majority of mediocres at the Lalit Kala. Most people are semi-professionals, lack ideas and are clueless about new developments," he says.

Says celebrated artist Anjolie Ela Menon, "Our Triennale is like a wall to wall painting show, more like a bazaar." Blaming the Akademi for remaining out of sync with changing art contours, she says, "Such meets at Paris or Sao Paulo are big events involving megabucks, promotional blitzkrieg and rigorous planning for about two years. Here, we don't even have proper venues with suitable space, leave alone a dedicated cell working for months." The result: many young artists are giving the show a wide berth. Says Calcutta-based artist Chandra Bhattacharya, whose work will come under Christie's hammer this year, "Frankly, I'd rather concentrate on other transparent events like the Harmony Show of the Ambanis."

Even the Triennale's selection procedure is under a cloud. In an effort to present a national repertoire and counter allegations of favouritism, the Akademi adopted a two-tier process. After the initial selection by seven regional commissioners, a four-member national committee screened the entries and invited 37 artists to present two entries each. The foreign catalogue, in turn, was finalised through "official diplomatic channels". But it's precisely this democratic approach to art that has ruffled feathers. "National integration doesn't work in art. Quality should be the only consideration," says a Delhi-based participant. Agrees Krishen Khanna, "You don't shop for paintings this way. We should have a roaming commissioner." Says artist Arpana Caur indignantly, "The foreign section is very insipid and it's clear that it's a hurried job. This is probably the worst foreign representation at the Triennale. The All India Fine Arts and Crafts Society (aifacs, one of the venues) is half-empty!"

For Anjolie Ela Menon, another glaring gap is the absence of curatorial aspects. "Commissioners just select. For a concrete focus, a curator is essential," she says. Moreover, with artists getting as little time as three months (some just got three weeks) to prepare, they are unlikely to churn out exclusive work for the event. "Usually, leftovers from the studio are handed out during such crunches," says Menon. The crisis has also been augmented by the fact that Lalit Kala has been without a permanent chairman for almost a year. Sarayu Doshi, director of the National Gallery of Modern Art (ngma), Mumbai, is doubling up as the pro-tem chairman, but admits her inability to "concentrate fully". Even the post of secretary is lying vacant. Sudhakar Sharma, an official at Delhi's ngma, though transferred to the Akademi to fill the vacuum, is yet to be relieved.

So, what's the reason for this colossal mess? Senior artists attribute it to the rampant bureaucratisation of the art establishment. "The whole set-up is so disgusting. The control-freak babus put up obstacles at every juncture," says veteran artist Paritosh Sen. Thus, many artists feel that the ministry won't even bother to scrutinise the recent constitutional amendments the review panel under Akademi vice-chairman C.L. Porinchukutty has recommended. Corroborates a ministry source, "Despite the key suggestions—removal of age limit for the chairman; a pan-Indian representation at the general council (GC); a five-year term of the GC with it taking office within a month of the closing of the fiscal year as opposed to that of the calendar year—it will be kept on the backburner till February."

But with Indian art becoming big internationally, Doshi and her Triennale cell are also dreaming big. It will be a busy schedule over the next 30 days, jam-packed with travelling lectures, interactive conferences, guided tours, art competitions and a special retrospective of Bhabesh Sanyal to mark his centennial birthday celebrations. Claims Amarnath Sehgal of the Akademi, "This year, the entries are highly creative, more diverse and the number of participants has gone up significantly." However, the ground realities suggest a different story.

After a long delay, the last-minute scramble and intimation has not only seen many premier countries backing out from participation, it's also hampered the production of the catalogue—a key document at such conclaves. A 100-odd 'hurriedly-prepared' copies reached the inaugural jamboree for ministerial distribution, the rest were told to "keep calm and wait for subsequent consignments".

Then there was the invitation foul-up. With the unavailability of both the president and the vice-president, the onus was on the culture ministry to scout the 'inauguration circuit' for a replacement. But Union minister Ananth Kumar, despite being the obvious choice, was non-committal till the end. So, the invitation cards could not be printed and sent out on time, leaving many delegates, embassies and senior artists perplexed and peeved. The disarray descended into a farce at the opening ceremony at Rabindra Bhavan. Ananth Kumar inaugurated the event waxing eloquent on the "Olympics of visual art"—without even taking a look at the exhibits!

The event has always been an arena to settle personal scores. Big names including Krishen Khanna, Satish Gujral, Arpana Caur have all been through their 'artistic dissensions'. If Khanna was alleged to have awarded himself at the first Triennale, Gujral was later thought to have manipulated the jury's decision to accommodate "friends" Naresh Kapuria and Prem Singh. Similarly, derogatory remarks stalked Arpana Caur and Pushpmala when they became the first women artists to bag the prize.

But as Anjolie Menon quips, "As a tribe, we're megalomaniacs." So, success might always be said to attract jibes. Finally, it's a veteran art columnist who comes up with a remedy for all the ills of the Akademi and other art establishments: "It's utterly wrong to have prizes and judges when it comes to the arts and literature," she says. But then, a genial commune of artists doesn't seem quite possible either. Till then, there's no alternative to cleaning up the Akademi's show. Bonfire of the Vanities