Ambivalence marks the Indian attitude to feet and footwear 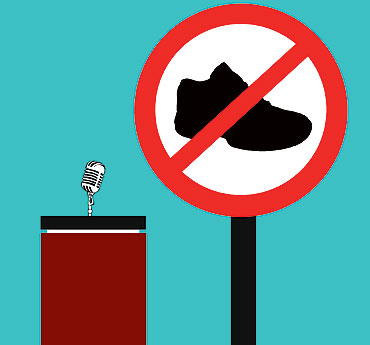 Illustration by Sorit
Laila Tyabji May 04, 2009 00:00 IST The Padukastra Paradox

outlookindia.com
-0001-11-30T00:00:00+0553
Indians, adept at innovative, inventive jugaad, discovered the uses of footwear as weaponry long before that Iraqi journalist won international fame and acclaim hurling his shoes at George W. Bush, the former US president. Media images of our Vidhan Sabhas after a debate, littered with the abandoned chappals of irate MLAs, along with a few broken chairs, are all too familiar. As early as 1971, Indira Gandhi had a sandal chucked at her by an angry Telanganaite when she canvassed for my father in Hyderabad. India always leads the world! The recent spate of pre-election shoe-chucking only calls attention to the range and eclecticism of our footwear—from Jarnail Singh’s Reeboks to the wooden khadau aimed at Advani.

Perhaps it’s because India was by tradition a primarily barefoot country that footwear has taken on such diverse and multi-faceted incarnations and associations. By some curious sociological quirk, feet have always been reverenced, while footwear is considered unclean. Nevertheless, footwear has also taken on more amazingly ornamental and imaginative forms in India than anywhere else in the world. They may be jewelled and embroidered, sequinned, studded, twisted, tasselled and twirled and made in every conceivable and often unlikely material from silver, gold, ivory, or even jade, to wood, palm leaves and reed. Traditional Indian footwear varies from the ceremonial boots of the Northeast—felted, knee-high contraptions, rigid with satin, velvet and woollen cutwork—to the thin slivers of bark worn by Jain pilgrims and monks. The Mughals had the insteps of their slippers inset with diamonds and rubies, while self-mortifying ascetics wore clogs with metal spikes that pierced their flesh at every step.

Faced with these multiple choices, Indians seem to have little sense of appropriate occasion—exercise-shy MPs wear Nikes with their dhotis, and Page 3 socialites high-heeled stilettos with jeans at polo matches. Now that international shoe brands have entered the public consciousness, people are prepared to pay the most outrageous prices—a pair of Jimmy Choos or Manolo Blahniks can cost well over a lakh. Paradoxically, the same wannabe fashionista will bargain voraciously at Dilli Haat over an exquisitely handmade, embroidered pair of jootis priced Rs 300. Equally paradoxically, the people who actually make the jootis are considered beyond the social pale. Even now, cobblers live segregated in most Indian villages. The word that denotes those who work with animal hide, Chamar, is considered pejorative. Ironically, in Tirupati, those not allowed to enter the inner sanctum were presented the deity’s shoes for prostrating themselves before.

Mahatma Gandhi, who brought his unique brand of logic to the dilemma of integrating India’s caste-ridden, complexly prejudiced society, made leather chappals as well as spun cotton. He set up tanneries and sandal-making workshops in his ashrams, and even made and presented a pair to Gen Jan Smuts while in prison in South Africa. Smuts wore them saying he was not "worthy to stand in the shoes of so great a man." Sadly, despite Gandhi’s example, prejudices remain. Gendi Lal, a master leather craftsman belonging to Ranthambhore, has travelled all over India with his wares, earning lakhs of rupees from his intricately plaited and punched footwear, a skill of which he is one of the few remaining practitioners. Nevertheless, his son prefers to remain an unemployed "BA pass" graduate. He thinks it has more "status" and makes him more marriageable.

"Hail to that foot of the lusty beloved which hits the head of the lover..." says the fifth century drama Padataditakam. In India today, rubber Bata chappals have replaced the traditional village jooti, and machine-made branded shoes and sandals the delicately hand-crafted mojris and pointy-toed salimshahis of yesteryear fashion. And over the years, the customary touching the feet of elders has become a half-hearted, embarrassed, token bob.

But India is a land of traditions, ever evolving, though nevertheless sacrosanct while they last. It isn’t surprising that our politicians, no longer revered or respected, should now be greeted with shoes rather than salaam-namastes. If this becomes common (the net protecting Narendra Modi’s election podium suggests he fears so) and a volley of shoes replaces those enormous garlands that become more and more voluminous every year, the village cobbler may again find regular employment, since stiletto heels are both sharp and expensive and Adidas is non-swadeshi.