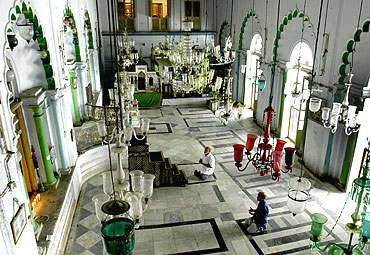 Satyajit Ray's choice of the Imambara at Metiabruz in Calcutta's southwestern fringe to shoot many scenes of his landmark Shatranj Ke Khiladi three decades ago wasn't a random pick. In fact, the location couldn't have been more apt for the subject of the film—a nuanced depiction of the decline of the kingdom and ruler of Awadh. For, it was to Metiabruz—a corruption of the original 'Matiya Burj' or mound of earth—that Wajid Ali Shah, Awadh's last nawab who was deposed by the British, was exiled. All that remains of the 31 years that the nawab spent at Metiabruz since his exile in 1856 is a sprawling Imambara and a private mosque (the Shah Masjid) that he built ten years after arriving here. And though both are in a state of dilapidation, it now looks as if they won't meet the same sad end as their creator and his kingdom: the Left-ruled Calcutta Municipal Corporation has decided to spend Rs 42 lakh for urgent repairs of the two structures.

The Imambara is like a miniature, though less ornate, model of the grand Bara Imambara at Lucknow that was built by Wajid Ali's great-grandfather Asaf-ud-Daulah in 1784. However, this Imambara also has its rich slice of history, including tazias that date back to Wajid Ali's times. The nawab's grave, as that of his son and many of his descendants, are located inside the Imambara.

A silver- and gold-plated teak tazia that's 125 years old and two big bowls made of Firoza, a special stone imported from Persia that is said to change colour on coming into contact with any poisonous substance (and, hence, favoured by royalty to make plates, cups and bowls for personal use), are some of the objects kept under lock and key in a room that houses the last resting place of Wajid Ali Shah. Symbolically, a red velvet settee that was depicted as the nawab's throne in Shatranj Ke Khiladi and gifted to the Sibtainabad Trust that runs the Imambara by Ray after the shooting, occupies pride of place inside this well-guarded room. A big bronze plate with the royal insignia of the rulers of Awadh, stained glass windows, massive chandeliers and finely wrought railings provide a glimpse into the Awadh royalty's rich past.

Syed Ibne Hasan Naqvi, secretary of the trust and great-grandson of Syed Mohammad Naqvi, Sultan ul-Ulema (the head ulema in the court of the Nawab of Awadh), is happy that efforts to get funds for the Imambara and Shahi Masjid's restoration have finally paid off. "The shahnasheen (where the tazias are kept) and the saiban (the large verandah used for gatherings) at this Imambara have become very weak and need urgent repairs, as does the roof. Also, many priceless articles like these chandeliers and some rare paintings and photographs need to be restored," Naqvi told Outlook. The trust is headed by Prince Nayyer Quder, one of the two surviving great grandsons of Wajid Ali Shah.

The Imambara's restoration plan was drawn up by the Archaeological Survey of India, which submitted a copy to the state government with a request for funds for this heritage structure. The Calcutta Municipal Corporation, which got to know of this, promptly offered to fund the restoration project. "The heritage and culture of Awadh was one of the richest and most cosmopolitan in the world. A slice of that remains in Calcutta and we're duty-bound to preserve it," said municipal commissioner Alapan Bandopadhyay. The Left-ruled civic body's offer is said to have been dictated, at least substantially, by the need to arrest the erosion in the CPI(M)'s votebase among the minorities. That is why, perhaps, CPI(M) leaders are already speaking loudly about this showcase project in a Muslim-dominated area of the city. 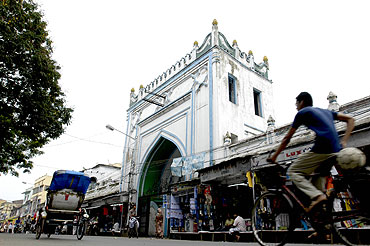 Rewind gate: The entrance to Metiabruz

The Imambara and the Shahi Masjid, however, are only two of the 35-odd structures which include sprawling and architecturally rich palaces and mansions the nawab built for his concubines and senior officials along the banks of the Hooghly. "Metiabruz was actually a mini Lucknow," historian Uttara Chakraborty told Outlook. "Wajid Ali Shah infused the Lucknawi culture into Metiabruz. It's as if he transplanted a miniature form of Lucknow into this part of Calcutta." Wrote Abdul Halim Sharar in his book in Persian, Guzishta Lucknow, which has been translated into English: "There was the same bustle and activity, the same language, the same genteel style of poetry, conversation, wit, the same tehzeeb, and many of the same aristocrats, nobles and commoners. No one thought he was in Bengal: there was kite-flying, cock-fighting, quail-fighting, opium addicts reciting the same tales, the same lamentations in the recitals of marsiya and nauha." Sharar's father was a senior figure in the nawab's court.

Sharar's book provides a fascinating glimpse of life in Metiabruz from 1856 until Wajid Ali's death in 1887. Wajid Ali, wrote Sharar, used to stay at a palace called Sultan Khana which, along with two other mansions (Asad Manzil and Murassa Manzil), were given to him by the British. But within a few years, the Nawab constructed beautiful new palaces with sprawling gardens on the banks of the Hooghly. Sharar documented in detail the nawab's fondness not only for art, music and dance (notably thumri and kathak), but also animals. The exiled prince had a large zoo with thousands of birds and animals including tigers, leopards and giraffes. He also built what was perhaps the world's first snake house with hundreds of reptiles, whose daily feeding of frogs drew fascinated crowds. The nawab used to spend nearly a fifth of his monthly allowance of one lakh rupees from the British for the upkeep of this zoo. Sharar also provides an account of the nawab's other monthly expenses, including those on his legion of concubines, and the court's decadent ways even during exile.

All this, however, came to an end abruptly after Wajid Ali's death in 1887. "The British immediately threw out all the nawab's family members, officials and others from the palaces he had built, and auctioned off these properties, even demolishing many of them," says Chakraborty. "The entire lot of people from Lucknow were reduced to penury and many went back to an uncertain future in Lucknow. The British did this to obliterate all traces of the Awadh royalty from Calcutta and ensure there would be no rallying point for any future revolt against British rule." Naqvi adds that the British didn't destroy the Imambara or the Shahi Masjid due to fear of inciting Muslims to another revolt. It's an irony of history that these royal relics are now being leveraged by Marxists to win over the city's Muslim populace, in the process saving a small part of a prince's legacy to Calcutta from obliteration.