The Other Gandhi Yatra

The 'hi-fi' candidate, the motley rashtrabhakts and rivals—Pilibhit serves up a heady brew 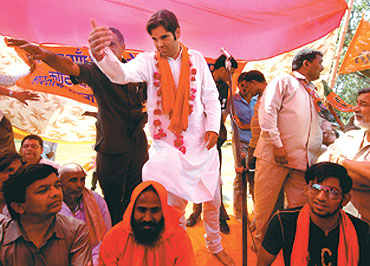 So, how good are you at attacking Muslims without actually naming them? If the Vishwa Hindu Parishad announces a Saffron Idol contest, this is what the elimination round will be about. Before us, in village Kanakor, is a middle-aged speaker who would sail through that round with ease. There are two kinds of voters, he tells the large crowd assembled here for over an hour in the merciless afternoon heat—"rashtrabhakts" and "rashtradrohis", nationalists and traitors. "Rashtradrohi vote zaroor denge, apne leader ke ek ishare par vote denge (The traitors will always vote, and on the orders of their leaders)," he thunders, his voice amplified by a mike. "And their women will stand in long queues, with their children around them," he continues, with sarcastic mock admiration. "It will be hot and slushy, policemen will push them around, but they won't budge—not until they cast their votes." Then, chiding the "rashtrabhakts" in a big-brotherly way for being lazy, Ram Saran Varma, a BJP ex-minister, finishes off with a sinister compliment: "Rashtradrohi se matdaan ki kala seekhni hogi (We will have to learn the art of voting from the traitors)."

When it comes to the dark arts of Hindu vote consolidation, though, men like him, prepping the crowds before Varun Gandhi's meetings in Pilibhit, do not need lessons. They stand on stages draped in saffron and flirt dangerously with the election code—more dangerously than Varun, with the spotlight trained on him, clearly wants to right now. By the time the large young man arrives in a jeep kicking up dust, the Jai Shri Rams are rolling easily off tongues, the kamal ka phools are being obscured by dancing triangular VHP flags, the tough-looking fellows in T-shirts, snazzy dark glasses and saffron scarves who were earlier zipping around on motorbikes, are milling around in an orchestrated frenzy. Party workers twice Varun's age are getting ready to touch his feet, and the audience is waiting to listen to him.