Terror, as the tool of despair or virtue, has ruled our world order 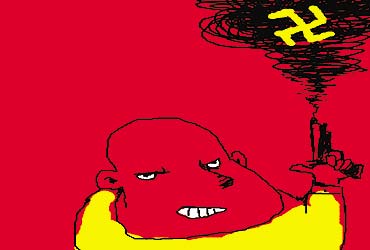 outlookindia.com
-0001-11-30T00:00:00+0553
Five years after 9/11, there has been a narrowing of cognitive and emotional range all around. The global culture of common sense has concluded that hard-headed, interest-based terror—favoured by mainstream international relations and exemplified by the cia's repeated attempts to assassinate recalcitrant rulers hostile to the US—is now not terror. Terror now involves the defiance of rationality and abrogation of self-interest and is, hence, 'cultural'. As if to prove the mainstream right, the rage of those who feel let down by the present global system and see no future within it often don't have a specific target and are looking for one. Regimes that latch on to that free-floating anger can go far. Indeed, sometimes their targets too have the same need to search for, and find, enemies, thus establishing a psychological bond that binds them in lethal mutual hatred.

Though many pretend to see terror as a neophyte in global politics, they shut their eyes to the human propensity to hitch terror to organised, ideology-led political praxis. Robespierre said—on behalf of all revolutionaries—that without terror, virtue was helpless. Terror, he went on to claim, was virtue itself. Despite pretensions, all states believe that when it comes to Satanic others, all terror is justified as long as interpreted as counter-terror, retributive justice or collateral damage. Guernica, Auschwitz, Dresden, Nanking, Tokyo and Hiroshima are all formidable mileposts in attempts to hitch terror to virtue. The culpable states were sometimes autocratic, sometimes democratic. Few are now surprised that some of the iconic defenders of democracy, such as Winston Churchill, were as committed to terror as Robespierre was. Churchill not only co-discovered area bombing, as against strategic bombing, he also did not intercede when supplied with evidence on Nazi death camps.

Into this atmosphere has entered a new genre of terrorists, the suicide bombers. They come prepared to die and, therefore, are automatically immune to the fear of counter-terrorism, which they see as a useful device for polarisation of public opinion. This is what hedonic cultures cannot handle. What kind of person are you if you don't leave an option to see the future you're fighting for and if you don't care what backlash does to your neighbourhood or community?

Yet, the key psychological feature of today's suicide bombers, despair, is not unknown. Despair is central to our understanding of contemporary subjectivities and some of the greatest creative ventures in arts and social thought. Van Gogh and Friedrich Nietzsche are two random examples. Harsha Dehejia has even tried to introduce the concept into Indian art history, by extending Bharata's theory of rasas. Is the desperation powering the self-destruction of the new breed of terrorists the obverse of despair that often underpins contemporary creativity? Does this despair come from defeat or enforced invisibility and inaudibility? Are the powerful oblivious that utter penury, collapse of life support systems due to ecological devastations, and hopelessness are the underside of prosperity and technological optimism?

Above all, is there a way out of the enforced invisibility and inaudibility? September 11, Gandhian activist-scholar Rajiv Vora reminds us, was the day Satyagraha was born in Johannesburg in 1906. South Africa was then a proudly authoritarian police state, unlike British India, reportedly presided over by a liberal, colonial regime that, political realists assure us, ensured Gandhi's success. Does that alternative to terror tell us something? Frankly, I don't know. We may get a half-answer if we examine the fate of a community known for martial valour and propensity to religion-based violence.

In India, till a few decades ago, the Pathans were the symbols of non-violence. Accounts of the non-cooperation movement state how they faced ruthless baton charges and firing but never retaliated or flinched. For Gandhi, they were the finest exponents of militant non-violence in the 1930s. The Pathans evidently brought to their non-violence the same religious fervour which they now bring to terrorism. Is this change only due to dedicated fundamentalist clerics, the brutalising anti-Soviet struggle, or the skill of Pakistan's ISI? Or does the contradiction exist in human personality and Pathan culture itself? Are they as ruthless with themselves now as they were in colonial times?

Only a few cultures like Sparta and the Third Reich celebrate violence unconditionally. In the rest, violence and non-violence exist as human potentialities. Life experiences determine which potentiality is actualised. Only by negotiating these experiences can you battle the ideologies that organise these experiences into a work plan for terror. If you cannot, you contribute to the sense of desperation and abandonment. As a well-known Palestinian psychiatrist claimed, "It is no longer a question of determining who amongst the Palestinian youth are inclined towards suicide bombing. The question is who does not want to be a suicide bomber."