Kung fu, karate, taekwondo—they all have their roots in this form 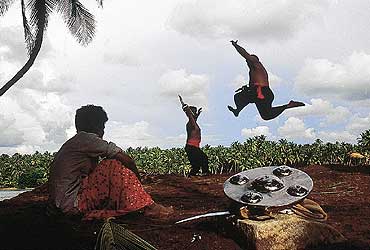 outlookindia.com
-0001-11-30T00:00:00+0553
Kalaripayattu, which literally means the arts of the gymnasium, is a 2,000-year-old art form. It gained prominence as the main combat style honed by members of private armies raised by the provincial rulers and lesser lords. Most famed martial art forms of the east—from kung fu to karate to taekwondo—trace their roots to kalaripayattu. Records dating back to the 12th century establish that itinerant Buddhist monks from south India passed on the rudiments of the fighting art to Chinese monasteries, including the Shaolin Temple.

Kalari fighters get their training right from their childhood. Sunil Kumar and his brothers, for example, were weaned into the martial art by their father, Narayanan Nair gurukal, when they were seven years of age. The trainee is put through years of rigorous flexibility-, strength- and stamina-building regimens before he qualifies to clutch his first wooden weapon, a short staff. It is only much later that he graduates to handling metallic weapons such as knives, swords and the lethal urumi, a six-feet-long, double-edged flexible sword coiled around the waist, snake-like, which is unleashed when the fighter confronts a mob. The final stage involves using the knowledge of the body's pressure points and nerve centres (marma) to paralyse, cripple or kill an opponent.

"In kalaripayattu, the emphasis is not on muscle-building," explains Sathyanarayanan, son of Govindankutty Nair, gurukal of the cvn Kalari Institute, Thiruvananthapuram. "The body is rather trained to be supple and to perform movements that depend solely on a flexible spinal column."

The martial art form also spun off its own herbal therapy to ease pain and aches. To sustain themselves and their art form, the warriors turn healers and practice kalari chikitsa, a system of medicine unique to the kalaripayattu tradition. Ancient warriors would treat their wounds with a cornucopia of local herbs and oils whose healing properties were engraved in palm-leaf scrolls, the secrets being passed on from generation to generation. Today, the established kalari centres operate clinics that treat a range of ailments from fractures and sprains to more debilitating diseases. The kalari schools run on the money earned by the clinics.

Balachandran Master, a Thiruvananthapuram-based kalari teacher and specialist in kalari medicine, treats American software professionals seeking rejuvenation and other foreigners wary of allopathy and in search of alternative remedies for a host of lifestyle diseases. "I energise the marma or pressure points through oil massages which helps the body heal itself," the master explains. Visitors to his Indian School of Martial Arts in Thiruvananthapuram have included such celebrities as Japanese sumo wrestler Kyo Kudozan. He went through a head massage routine to "stimulate the marmas or pressure points in the head region". They call it the relaxation theory. And it sure works.