The Oracle Of Transitions

MT: A poetic-realist passage between text and filmic image 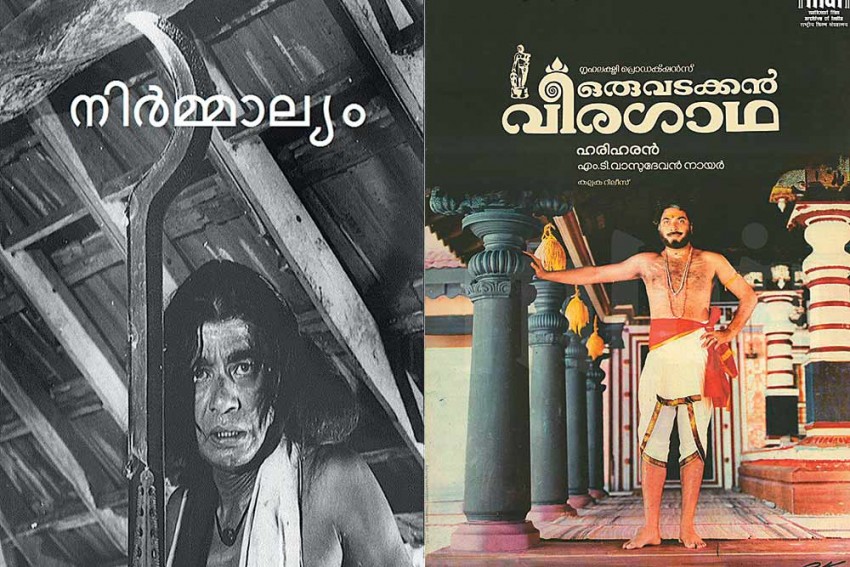 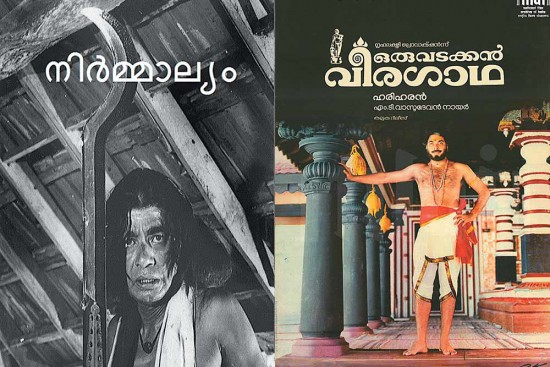 It has been more than half-a-century since M.T. Vasudevan Nair embarked on his specifically filmic vocation: 1965 marks the onset, to be precise, of his long and distinguished career in screenplay writing. As a young writer of short stories and novels in Malayalam in the 1950s—part of a new welling-up of literary energies across Kerala’s transitional cultural landscape—acclamation had already come his way by then. That included even a state Sahitya Akademi award by age 25, in 1958. So the turn to film-specific writing would have meant imposing a ­demand for new shapes on his artistic clay and, at least originally, eking out a translated vision. As he settled into it, perhaps he migrated to a different kind of imaginative exercise—one that already had the duality inscribed within it, both the textual and the visual. Either way, he managed it with such finesse, and became a byword for non-frivolous but extremely engaging narrative cinema over the last half-century. 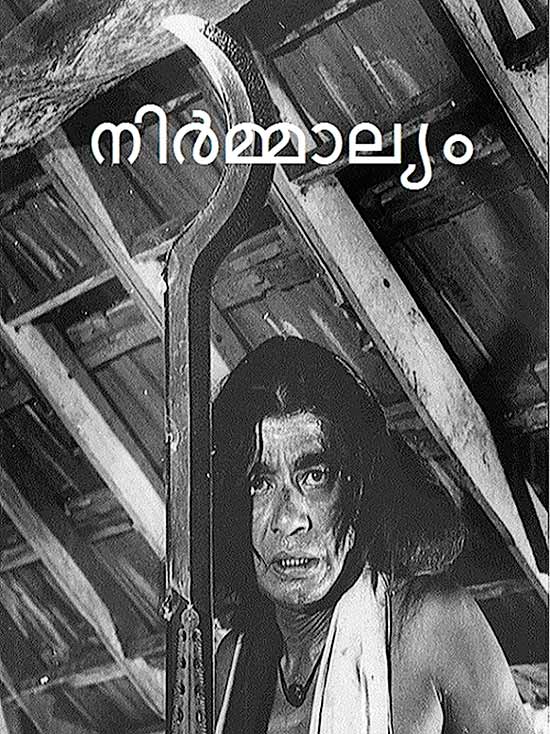 The career itself spans out like a cumulative, if quiet opus on screen now—nearly sixty screenplays, all of which helped redefine the art of film narration. There’s an additional, intriguing layer here. Seven of those screenplays became film projects that he directed himself, therefore ­securing the translation rights between the two narrative universes. Here, he controlled how the textual idea was realised on screen. The very first time this happened, with Nirmalyam (1973), he won the national award for best feature film. This is besides the four times he won the national award for best screenplay—and the whopping 12 times he did so at the state level. No wonder the sway and influence he had over the next generations is overwhelming and unprecedented.

But in the initial stages, it still took turning a corner—or rather, helping the mainstream itself turn a corner. MT (as he is widely known) was always apprehensive of the loud tone he was being forced into at the start of his film writing career. A reluctant entrant from literature, he was “affectionately compelled” to write his first script, Murapennu (1965), produced by his friend Sobhana Parameswaran Nair. Even in the preface to his first published screenplay, MT expressed his apprehensions about the creeping ingress of melodrama, something he detested all through his career. It was he who created a ­poetic track between realism and drama that held things in a fine balance and laid the way for future writers on screen.

There was another demand, from the other end of the spectrum, left to be met. Despite his path-defining contributions to Malayalam ­cinema, MT has always been seen as “apolitical” and even socially non-committed by certain critics. (Let’s offer a Wikipedia definition here: MT, in spite of his broad and deep sympathy for the marginalised, doesn’t identify himself with any particular ­political ideology or movement.) Over and above that broadly humanist zone ­expressed within the brackets, it’s a totally baseless charge, for ­soc­iety’s pulse bounds through his works. What is not reflected resoundingly in his films if not the individual and collective ­concerns of human beings?

Murapennu, his debut, throws light on the disintegration of the joint family system and the breakdown of feudalism—a whole transformation of the social echelons in the mid-20th century. He views the passage of time and deeply instilled human mores nostalgically but not ­uncritically. It’s a specially invested zone he creates to do this. Nagarame Nandi (1967) too, for instance, is a musing on how metropolitanised cultures started devouring the simple virtues, even nobility, of village life.

Murapennu (The Betrothed Girl), as the title suggests, connects the individual level of focus to the social by examining the ­vagaries of the marital arrangement (among Nairs) of betrothing the children of brother and sister without (naturally) anything like consent being possible. The motivation is a worldly one: to prevent the scattering of landed properties and money. MT repeated the theme after 32 years, in Rithubhedam (1987), which incidentally won the national award for best supporting actor for a scintillating performance by Thilakan. The Nagarame Nandi theme too was recounted in a different tone in Kadavu (1991), which he ­directed—it was again a national award-winner for screenplay and best regional film. 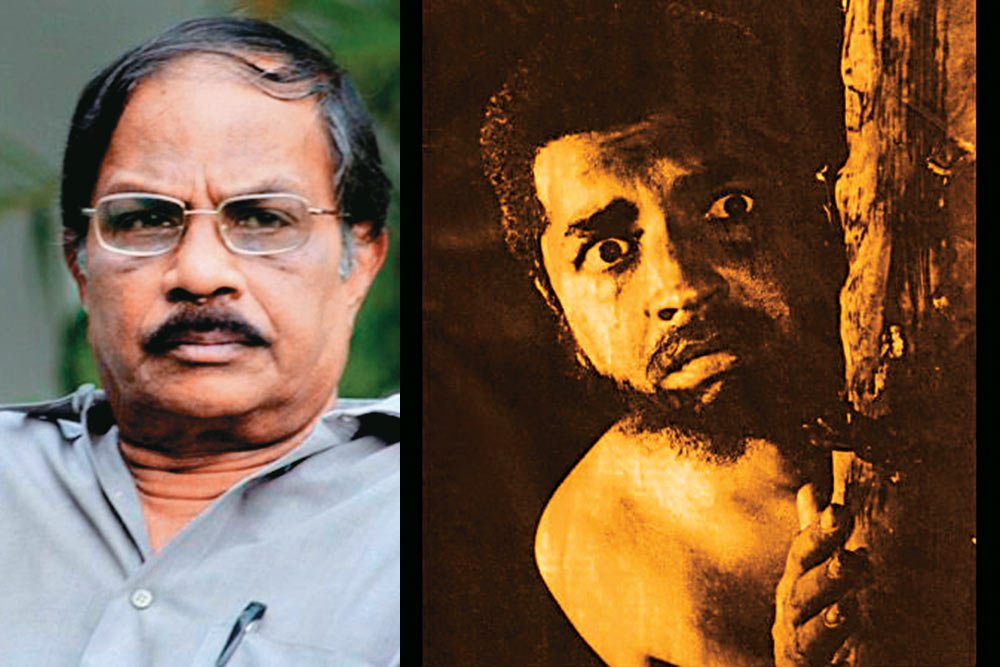 MT (left) examined the ­mentality of the masses with Iruttinte Athmavu (right), a film about a half- witted youth billed ‘mad’.

Iruttinte Athmavu (1967), which told the agonies of a half-witted youth who was billed “mad” by society, was yet another exploration of mass psychology and sadism. The same blind, insensible “mass” will label the rebellious Govindan Kutty, the protagonist of Asuravithu (1968), as a fraudster and thief. Asuravithu dwells on an unf­eeling, inhuman gene in society at a time when the landscape was under the vicious grip of a leprosy wave. The film, based on MT’s ren­owned novel, related a real episode in the 1940s, when a leprosy epidemic ravaged the writer’s riverside village. The character too was drawn from real life. In the climax, Govindan Kutty, forced to change religion from Hindu to Muslim, and then renounced there also, decides to rear an orphan baby and declares to the questioning world that he will raise the kid as “a human dev­oid of any religion”. The placarding and sermonising is minimal: it relies, as always with MT, on a sort of deeply felt human effect.

Nirmalyam, his directorial debut, told the travails of a poor village velichappad (temple oracle) and his struggle between belief and atheism at a time of social transition. Torn between the largely non-believing youth of the day—the oracle’s own son is part of that set—and his own bel­iefs, imbibed through generations, the velichappad finally collapses before the devi idol, cuts open his own forehead with his ritual sword,  and abuses and spits blood at her face for turning deaf to his sufferings. The oracle’s harakiri before the vigraha was a rude shock to 1970s audiences. But MT himself has said that such a blood-curdling climax would have been impossible in the present socio-political scenario. Talk about belief in rational progress.

In the years that followed, MT often sojourned to works of social criticism. Whether Manninte Maril (for director P.A.  Backer), based on Cherukad’s novel with its strong leftist tone, or Paathiravum Pakalvelichavum, which recounted the tale of a cross-religious marriage and its eff­ect on a conservative landscape, and Vilkanund Swapnangal, which for the first time shone a torch on the tribulations of NRIs in the Gulf (both directed by Assad), the tales always had a humanist core.

MT meets the 1980s with a variety of themes apposite to that age. Aalkkoottathil Thaniye (1984) dwelt on the agonies of ageing and solitude, while Anubandham (1985) treated the ordinary sadism that little kids suffer—both were directed by I.V. Sasi and Mammootty as protagonist enlivens both. 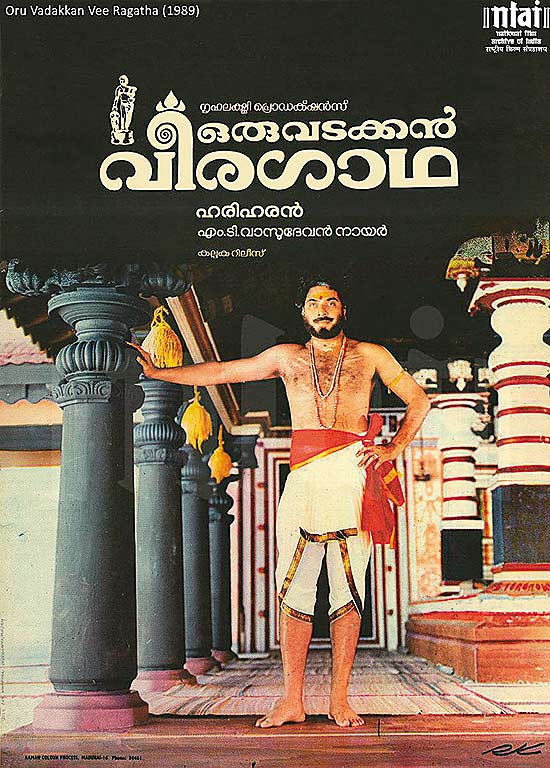 A poster of Oru Vadakkan Veeragatha, for which MT won a national award

In the 1980s, MT delivered two of his most powerful screenplays, discussing the disenchantment with Naxalism in Kerala—Panchagni (1986) and Aranyakam (1988), both directed by Hariharan. Panchagni, loosely inspired by a disillusioned Naxal’s life, told the story of Indira, a former activist now serving out her imprisonment, who comes out on parole to be near her dying mother, herself a freedom fighter. In a touching scene, Indira asks her mother whether she is not afraid of the touch of her “murderer daughter”. The old lady, embracing her daughter, says: “In our philosophy, we have known God as love. Does your philosophy discard love from its textbooks?” The film ends when Indira shoots down a would-be rapist. As she walks back to prison, she tells a journalist friend who was starting to dream of a new life with her, “I can’t elope from myself, Rashid!”

In Aranyakam, MT discusses the futility of militant activism for social reformation. Murali, a Naxal in hiding, befriends a dreamy girl who finds solace in nature and poetry. It’s during a jaunt across the jungle in her ancestral home’s vicinity that Ammini meets Murali. Soon they strike a rapport, and their discussion often wanders to the Naxalite idea (and use) of annihilation. Murali asks Ammini, “Ever heard of winning your foe with love in any stupid philosophy? Impossible.” In a dramatic finish, Murali is captured and killed in an encounter. It has to be an almost foretold tragedy that it will be confirmed yet again to Ammini that wrath will only beget wrath. In the script, MT takes a non-partisan stand. He is aware that the system is inhuman and corrupt, and does not shy of demonstrating it, yet the drift of the film is towards pointing out, gently and unobtrusively, that all violent efforts are fut­ile and love, though a weak means, is the only way to hold on to the lost ground of humanity.

In the 1980s, MT wrote two of his most ­powerful screenplays which dwelt sensitively on the topic of Naxalism.

Amrutham Gamaya (1987), again directed by Hariharan, ventures into a different territory: the cruelties of campus ragging and the unholy nexus between the medical profession, healthcare as a business, and politics. Dr Haridas, brilliantly evoked by Mohanlal, is burning in the penitential fires of a past crime: during his college days, in a hostel ragging episode gone horribly wrong, he had unintentionally become part of a murder. Never quite able to recover from the intense pangs of remorse, Haridas takes refuge in drugs. The film ends in an act of retribution, with a strong message against a social evil that had gripped society in the 1980s and ’90s.

M.T. Vasudevan Nair turns 85 this July. The literary vocation still preoccupies him. Just last year, he finished rescripting his award-winning  novel Randamoozham for the screen. The 1984 novel, the Mahabharata retold from Bhima’s per­sp­ective, had won him much acclaim, including the Vayalar award. Lovers of both Malayalam literature and cinema await the outcome. It is a Rs 1,000-crore venture with ­superstar Mohanlal in the lead, so perhaps it may not quite reproduce the classic MT: epics made of small gestures. But that old history will ­endure.

(The writer is an author, screenplay writer and TV producer)