The One Who Stayed

Naveen Patnaik fights incumbency to storm back to power. The alternative may have scared off voters. 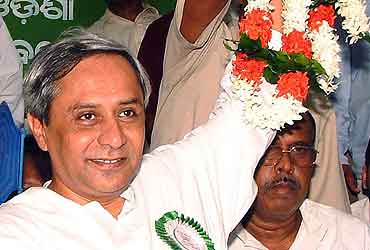 outlookindia.com
-0001-11-30T00:00:00+0553
When faced with a choice between non-performance and corruption, an electorate will use its collective wisdom to vote for the lesser of the two evils. Which is probably why J.B. Patnaik's re-induction as Orissa Congress chief earlier this year was manna from heaven for his arch rival and chief minister, Naveen Patnaik. In 1999, the 76-year-old J.B. Patnaik, an old warhorse in Orissa politics, had ended the last of his three terms as CM in ignominy, maligned by several charges of corruption.

There was, therefore, an air of inevitability about Naveen Patnaik's victory in the assembly elections, despite high-profile dissension in his Biju Janata Dal. The BJD-BJP alliance's victory in 18 of Orissa's 21 Lok Sabha seats was just a natural corollary. "He is not yet a tainted man, and when pitted against the Congress's J.B. Patnaik, whose previous term as CM was marred by corruption charges, Naveen Patnaik comes out smelling of roses," says Rabi Das, a political analyst.

Despite having completed a term in office, Naveen is still considered a political greenhorn by many and he may have done little to uplift his impoverished state. However, he has hardly been the supine, helpless politician he was made out to be when he first came to power in 2000. Well aware that in politics, image and message often determine who gets to hold on to power, Naveen embarked on an astute, two-pronged political strategy during his first term as CM. First, he distanced himself and his party from the policies of the previous Congress regime by crafting a message of clean and transparent governance. It was reinforced throughout his term by various anti-corruption drives, sometimes not even sparing a few of his own ministers. Several BJD ministers were expelled from the party. That the Congress welcomed some of these expelled BJD leaders didn't help its prospects.

Second—in fact an extension of the first—Naveen has carefully cultivated a personal image built around probity. Despite the Congress and its rag-tag alliance's allegations of large-scale corruption in the BJD-BJP ministry—nebulous references to lucrative steel and mines deals—not a speck of dirt has stuck to the CM's crisp white kurtas. Street talk has it that Naveenbabu is a "good and clean man". The CM's bachelor status also buttresses his honest image. "He has no family to promote or make money for. He doesn't need to be corrupt," says a net cafe owner in Bhubaneswar.

Obviously, Naveen's strategy has paid rich dividends. "We won because we have insisted on transparency in governance from the beginning. I cannot tolerate corruption. It is a terrible stumbling block for development," he says. His decision to hold simultaneous assembly and Lok Sabha polls too helped the alliance make the most of A.B. Vajpayee's clean image.

But Orissa doesn't have much to feel good about. In the four years that Naveen has been CM, the biggest developmental thrill that coursed through the state was a 520-km, newly built stretch of National Highway 5 (which connects Calcutta to Chennai). That too was under the auspices of Vajpayee's ambitious Golden Quadrilateral project. The official statistics bear this out: in the past four years, poverty has remained stagnant at 47.3 per cent. Natural calamities continue to snip at the thin veil of economic growth. Unemployment remains a nagging concern and there has been no new industry in the state—despite the fact that the BJD-BJP won the 2000 assembly elections on promises of making Orissa a top investment destination.

So what explains the electorate's indulgence, this willingness to be lenient with Naveen? " Biju babu ka beta hai, inke dil me Orissa ka hi bhalai hai (After all, he is Biju Patnaik's son. He only has Orissa's interests in his heart)," is a common refrain one hears. Indeed, the continuing popularity of the late Biju Patnaik—the larger-than-life symbol of Oriya pride and identity—has played an important role in getting the votes for Naveen this time too. The reservoir of goodwill left behind by father for the once-prodigal son is seemingly bottomless.

Dressed in his trademark white kurta-pyjama Naveen may play up to the image of the dilettante politician. But make no mistake—behind his reclusive and diffident media image, he is known to be shrewd. "He is very firm in his decisions. He never vacillates once he's made up his mind," says BJD general secretary Narendra Swain. Another party insider says he's built up a "culture of fear within the party rank and file." Naveen, however, dismisses some partymen's insinuations that the 'Biju' in BJD should be replaced by 'Naveen'.

As he sets about the task of governing one of India's poorest states for the second term, there are enough causes for him to worry. For one, the dissidence within the BJD is growing. Members lament the lack of party cadres or grassroots party workers—perhaps the reason why the BJD-BJP alliance's final electoral tally of 92 seats fell short of its previous tally of 106 seats in the 147-member assembly. There are also fears that if Naveen were to tire of provincial politics and wants to return to his socialite-writer's life—in J.B.'s words, Naveen is a "flighty bird who has come to rest in Orissa before flying off again"—the BJD would crumble to dust. But the evidence right now is that Naveen is wedded to power. "I'm here until I retire," he says. In politics, that can be a very long time.

Balm Under The Palm Tree