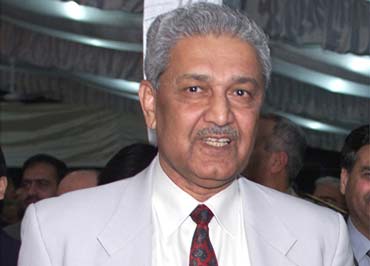 Deception: Pakistan, The United States And The Global Nuclear Weapons Conspiracy
By Adrian Levy By Catherine Scott-Clark
Penguin Pages: 608; Rs. 595
The worst proliferation scandal in world history, involving the sale of nuclear secrets across frontiers, was in Pakistan—today the main sanctuary of transnational terrorists. This well-researched book is not so much about that nuclear-smuggling ring as about the scandal behind that scandal: "How 30 years of parochial and sometimes criminal policy of the US enabled Pakistan to betray the West, build a vast nuclear arsenal with US aid, and sell the technology to countries hostile to the West, while giving shelter to the resurgent Taliban and Al Qaeda".

But what is left unsaid is that the brunt of politically expedient US policies toward Pakistan has been borne not by the West but by India, a victim of terrorism which now finds itself on the frontline of nuclear dangers. As the book concludes, the US has yet to learn from its mistakes. With Pakistan sinking rapidly, the US is courting India as a potential ally. But it continues to sell India-directed weapons to Pakistan, making it the world’s largest arms importer. Much of the nearly $11 billion in US aid to Pakistan since ’01 has been in military hardware and cash support for its operating budget.

Levy and Scott-Clark shatter the 21st-century fable of an A.Q. Khan-run nuclear supermarket busted by US intelligence. The main actors were Pakistani military and intelligence, with Washington in the know. To shield them, the entire blame was pinned, as part of a US deal with Gen Pervez Musharraf, on a group of "greedy" scientists led by Khan, and then these very men have been kept away from international investigators.

Long before Khan turned from a national icon to a scapegoat, he had been protected by the CIA. Washington turned a blind eye to the covert Pakistani bomb programme since the ’70s for the same reason that China aided Islamabad’s nuclear and missile ambitions—as a counterweight to India. The authors show how the CIA shielded Khan from arrest and prosecution in Europe in 1975 and 1986. The Dutch government did not take Khan into custody at the request of the CIA. "The US was not interested in successful prosecutions that highlighted Pakistan’s duplicity," they claim.

More recently, the US has helped whitewash Islamabad’s official complicity in the sale of nuclear secrets to Iran, Libya and North Korea. In fact, the Pakistan military—which has always controlled the nuclear programme—claimed that it wasn’t aware of nuclear secrets being sold until Libya and Iran began spilling the beans. The main reason why Washington joined hands with Islamabad in that charade is because it still sees the Pakistan military as a key instrument to advance its regional interests. Just as it helped keep the jehad-spewing General Zia-ul-Haq in power to take on Soviet forces in Afghanistan, it needs a pliant ruler in Islamabad today because it employs Pakistan as a gateway to military operations in Afghanistan, a base for clandestine missions into Iran and a vehicle for other geopolitical objectives.

After the Pakistani illicit supply network was uncovered, the UN Security Council passed a US-inspired resolution with no reference to Pakistan or even to the ring, but instead urged the world to share the responsibility. Resolution 1540 obligated all states to legislate and implement tight controls on materials related to weapons of mass destruction. In contrast, the US has taken such a tough line against neighbouring Iran that it got the Security Council to issue an excessively harsh diktat to Tehran to cease doing what the latter insists is its lawful right—pursue low-grade uranium enrichment under international inspection.

While the US is pushing for tougher UN sanctions against Iran even though the IAEA has yet to find evidence of a covert weapons programme there, it has gone to great lengths to ensure Pakistan is not penalised for its admitted nuclear transfers to Tehran and others. The exporting state has been allowed to escape international scrutiny and censure so that, as the authors point out, the importing state could paradoxically be put in the doghouse as part of a US policy to target Iran. The book warns that the various links in the elaborate Pakistani nuclear-supply chain have still not been unplugged, even as terror-exporting Pakistan has emerged "at the epicentre of world destabilisation".