The film doesn't leave you with bad dreams. It just makes you wonder: what's the point watching this remake when DVDs of the original are at hand? 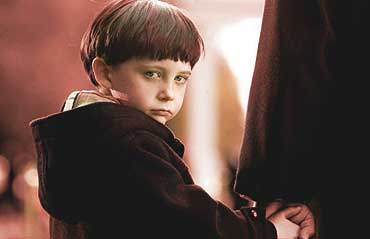 The only interesting twist in John Moore’s remake of the 1976 horror flick is that it casts Mia Farrow, the Rosemary of Roman Polanski’s much more evolved and scary cult classic Rosemary’s Baby, in the role of Mrs Baylock, the kooky and demonic nanny of the devil-child, Damian. The irony of the casting apart, Farrow’s is the only performance, in fact, the only thing to take back home.

Moore sticks diligently to the original. Of course, there’s an attempt to give a contemporary spin to the setting by referring to catastrophes like 9/11 and the tsunami as manifestations of the Antichrist. Beyond this, Moore refuses to display any bone of originality. Robert and Kathy Thorn loose their new-born and unknowingly adopt Damian, the son of Satan and a jackal. Damian is the harbinger of evil in the world, he is the Antichrist and the only way out is for Robert to kill...