The Olive Is Still Green 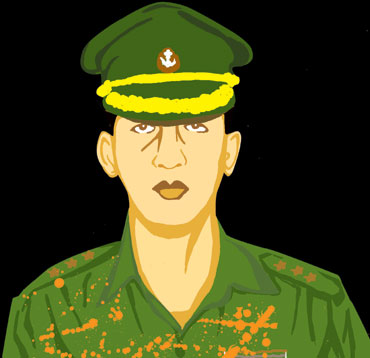 outlookindia.com
-0001-11-30T00:00:00+0553
The news of the arrest of Lt Col Srikant Purohit for masterminding the Malegaon blasts has attracted substantial attention, as this is the first case of its kind—of an army officer being arrested on charges of terrorism and more importantly because of fears that India’s last genuinely secular institution too has lost its secular sheen. But is it really the case? And can we assume that the fringe has become the mainstream? I would certainly say that this is a one-off case and that the secular credentials of the armed forces in general and the army in particular remain solidly intact.

Politics, religion and women are not discussed by officers, after a British tradition of remaining apolitical and keeping religion essentially at bay. And while it might be argued that the officer corps has become more and more representative of the middle class and therefore is likely to be easily influenced by hardline religious propagandists, right-wing sentiments are certainly never aired.

Yes, our soldiers do worship their gods, and mandir, gurudwara and masjid prayers are still very much part of the Sunday menu of most military units. But religion and faith in god have often motivated our armymen to push themselves to their limits and beyond. And those that fall prey to propaganda of the Sangh parivar and its jingoistic outfits are still so few and far between in our uniformed forces that, unless we become a police state where every conversation is recorded and every movement is observed, it will be impossible to know what lurks in the minds of those few who would take this insidious route.

Our army is not like Pakistan’s and our military intelligence—which Purohit belongs to—is certainly not an ISI. To paint, therefore, the entire olive green force with a saffron brush is rather unfair. Furthermore, to allege that such acts by armymen can lead us to assume that our army, of all our institutions, can also be blamed for aiding the communal divide—a blame that politicians must bear instead—is outrageous, to say the least.

In fact, on the contrary, the armed forces have strongly upheld the Indian Constitution and remained strictly outside the political process. There have been instances of politicisation of the senior brass of the armed forces. While it began at the time of Indira Gandhi, the BJP-led NDA government also must share some of the blame. This has led to a culture of sometimes appointing more amenable officers as service chiefs, in place of no-nonsense officers, but religious beliefs have had no role to play in such politicisation.

For the media to serve up headline-hogging story after story—by pointing fingers at the army—is to exhibit its superficial understanding of military matters. Just because it is driven today by sheer consumerism—since higher viewership or readership is often its driving force—the media can’t take it upon itself to denounce an institution like India’s army, which has repeatedly proved its secular credentials. And to create pressure on the military brass to identify more cases such as Purohit’s is to lose sight of the larger issue.

Indeed, the murky doings of Purohit and his mentors have tarnished the army’s secular credentials. But the entire episode could certainly have been handled better had the army’s brass hats responded quickly to the situation and issued a statement clarifying the army’s position on such matters and also asserting that it would take every step necessary to weed out people like Purohit. Instead, it was A.K. Antony who further assured the country that such acts would be checked, thereby implying that there is more to come! This is a job that the public relations officers of the Union ministry of defence should have done, instead of scanning newspapers for photographs of their bosses and putting up favourable news on their table seeking a "shabash".

The military must understand in the 21st century that the power of media is enormous in influencing public opinion, and that it has already lost valuable time over the past few years, as it has hesitated in befriending and understanding the media. Had it done so and stepped down from the ivory towers and responded equally quickly as the episode evolved, it would now not be hiding from television cameras that want a few sound bites that could give a balanced view of a story such as this. This was left to retired officers. But there is always something to be said for somebody in a position of authority defending a case with conviction. This has allowed the media to drive the military to the ground. But if national interest is what is our concern, let us not cast aspersions on the one institution that India can still bank on.

(Maroof Raza, an ex-army officer, is publisher of Salute, a fortnightly on the armed forces, and strategic affairs consultant on newschannel Times Now.)