The Nukes Of Barter

Musharraf brings out the CTBT cheque to stave off economic ruin 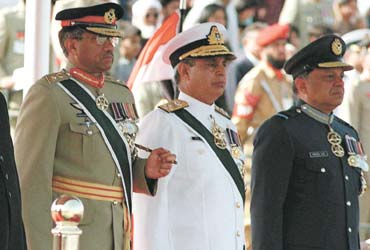 outlookindia.com
-0001-11-30T00:00:00+0553
The increasingly beleaguered Gen Pervez Musharraf, it seems, can do nothing right. The latest instance happens to be his decision to meet senior politicians for building a consensus on signing the Comprehensive Test Ban Treaty (ctbt). With the Opposition closing ranks, and the growing popular disenchantment against the military regime, Musharraf's ctbt initiative couldn't have been more inopportune and could invite a backlash. The military regime's turnaround on the ctbt is linked to the debt repayment crisis plaguing the country. Says leading economist Sultan Ahmed, "Between now and June 2004, Pakistan has to repay $21 billion (in debt servicing), roughly working out to an average of $7 billion a year." In addition, the national debt is a mammoth Rs 4 trillion; and the foreign debt stands at nearly $38 billion.

In fact, the link between signing the ctbt and the debt rescheduling issue was highlighted by none other than Musharraf himself. Talking to The Washington Times, he said, "Yes, there's some linkage, especially with Japan for the next tranche of aid, an estimated $1 billion. We are not quite there (signing the treaty), but are getting there. Many believe this means we'd be giving up our nuclear option. I'll have to carefully explain this in the coming weeks—that there's no rollback of our security. Unless we change perceptions on the ctbt, we'd be destabilising ourselves internally." Adds an ambassador from the Arab world, "For quite some time now, Islamabad had been trying to haggle for a substantial sum. But those interested in making Islamabad sign the treaty were offering only peanuts. That's why Pakistan tried to keep the ctbt card with it." Now, it might be time to use it.

The decision to talk to senior politicians on the issue was taken at a recent high-level meeting, indicating that the mounting economic crisis has compelled the men in khaki to swallow their pride and seek the help of politicians on the crucial security matter. When the army deposed Nawaz Sharif in '99, it had indicated it would elicit public opinion before signing the ctbt. Then foreign minister Abdul Sattar tried enlisting the support of Jamaat-e-Islami chief Qazi Hussain Ahmed who, however, linked his consent to a larger role in the Kashmir struggle. Interestingly, many believe Musharraf could have pushed the ctbt during his initial months in power, when popular opinion was in favour of the army. Says the ppp's Benazir Bhutto, "We should have signed the ctbt right after detonating the nuclear devices. We'd have thus gained the moral high ground. Today, the ctbt is a non-issue. The real issue is a return to democracy and restoration of the Constitution."

Indeed, the situation now is dramatically different. For instance, a belligerent Qazi now claims "the people have reached a consensus on signing the ctbt. They've said "no", loud and clear to any compromise on our national security." That the regime is nevertheless envisaging a change in its nuclear policy was further illustrated by its decision to retire the father of Pakistan's nuclear bomb, Dr Qadeer Khan, as well as Asfaq Ahmad, chairman of Pakistan's Atomic Energy Commission (paec).

Musharraf, defending himself, said, "I'm not a traitor and so there can't be any compromise on the nuclear programme". The Nation, however, pointed out, "The elevation of Dr Pervez Butt as head of the paec may well reflect the charting of a new direction at the commission, with the focus on peaceful use of nuclear technology. Any decision on a freeze or rollback would not be affected by the presence of these two scientists (Khan and Ahmad) and would be taken by the political leadership." But any possibility of evolving a consensus on the ctbt diminished after a crackdown on the Opposition last week. In an attempt to sabotage the joint Opposition rally in Lahore, thousands of political activists and leaders were rounded up. Commenting on it, The News said: "The crackdown has coincided with a warning from the Commonwealth Ministerial Action Group (cmag) that 'stronger measures' would follow if elections are not announced by October. While the foreign office may be justified in complaining that the cmag has ignored the steps already taken on the road to democracy, the fact remains that specifics of the new dispensation remain a matter of speculation. Consequently, democracy becomes the main talking point of all international visitors."

In all, it seems the proposal to sign the ctbt has been dictated by the need to blunt international criticism on the regime's democracy record as much as by Pakistan's worsening economic crisis. But now, with the Opposition's mood being what it is, Musharraf will certainly not find it easy to evolve a consensus on the issue.

The road to self-sufficiency, via physical and mental challenges