India-US nuclear deal stirred the torpid opposition parties into action, particularly the Left, and nearly led to a collapse of the UPA government 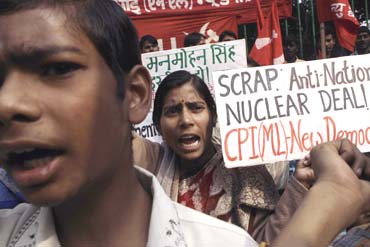 The conclusion of negotiations between the Indian and US governments on the nuclear deal required New Delhi to approach the International Atomic Energy Agency (IAEA) and the Nuclear Suppliers Group (NSG) to help ratify the agreement. At this juncture, both the Left and the Right got to their feet to protest. The Left at least had an argument—an agreement with an imperialist power, no matter how advantageous, was unacceptable. The Right spoke in so many tongues it was difficult to fathom what case it was arguing, except that if it was in power it would "renegotiate" the deal.

In all the heat and dust over the nuclear deal, two crucial arguments were blurred or ignored. First, India’s nuclear programme is not doing well. It needs fuel supplies for existing reactors, advanced technologies for future generation reactors, and contact with nuclear science all over the world which it is currently denied. Only the deal will allow India to open the gates to all three and salvage the programme. Second, with the deal in its pocket, India should be in a position to end the generalised technology boycott it has withstood since 1974. This is vital if India is to meet its developmental challenges and be competitive globally.