The NSA To Beat All NSAs Thus Far...

Brajesh Mishra would have been a hard act to follow. But Doval seems to be doing a pretty fine job of it. 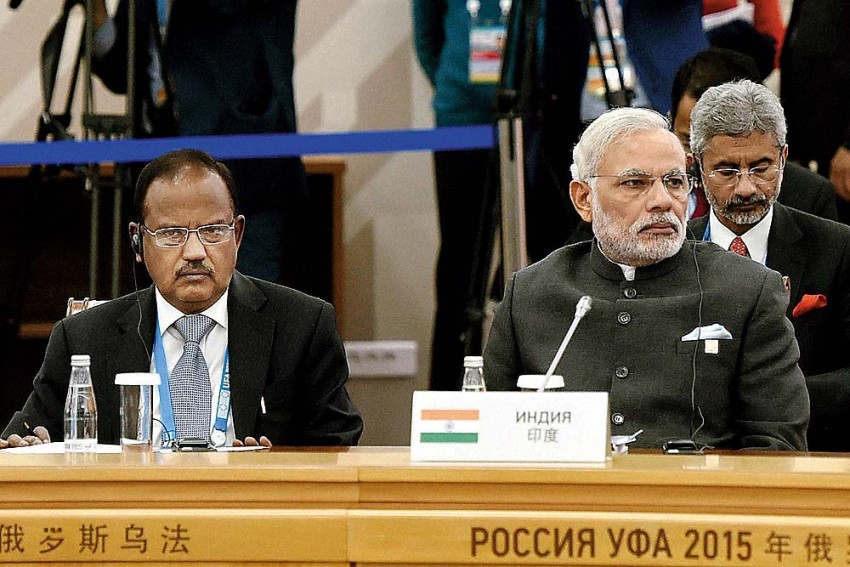 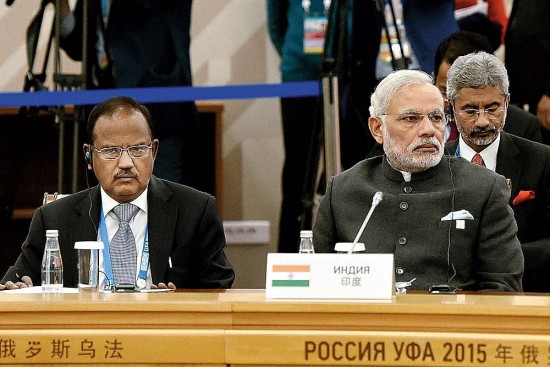 Ever since the post was created during the Atal Behari Vajpayee regime, the National Security Advisor has generally punched above his weight. But no ministry has felt the brunt more than the external affairs ministry. On paper, the NSA and the foreign minister (or the foreign secretary) operate in mutually exclusive areas: the former in security and strategy, the latter on all things foreign. In the Modi era, however, the distinction has blurred.

Ensconced in an office only a few doors away from the prime minister’s, unlike the foreign minister, who sits in another building, the NSA gets to see or meet the PM several times a day. NSAs before him have used this proximity to their advantage to get their message across, but none more so than Ajit Doval, who has overshadowed other advisors to truly become the PM’s ‘eyes and ears’.

“His is a presence that you rarely miss whenever Narendra Modi is having an important meeting with foreign leaders,” says a South Block diplomat. And the fact that  Sushma Swaraj is not around at every meeting gives Doval more space to operate. Foreign secretary S. Jaishankar, hand-picked by Modi last year after cutting short incumbent Sujatha Singh’s tenure by nearly six months, has rarely fought shy of flaunting his proximity to the PM either. But even he has had to give in to Doval on some key foreign policy issues, particularly in dealing with India’s immediate neighbourhood.

Doval, according to those who are close to him, was the brain behind the innovative deci­sion to invite leaders of South Asia for Narendra Modi’s inaugural ceremony as prime minister. That began the first step towards the thawing of Indo-Pak relations, or at least that is what Doval supporters claim. However, there is no clear ownership in the Indian esta­blishment on whose idea it was to make the “presence of Hurriyat in talks” an issue to call off the subsequent engagement and go into a six-month long hiatus.

The NSA also smartly planted stories in the Indian media last year about being in Iraq to coordinate the hassle-free release of Indian nurses stranded in the war-torn country. Irrespective of whether it was him or the MEA who initiated and successfully got the nurses back home, most people conveniently forgot about the 39 Indian workers who were picked up and held captive by the ISIS fighters.

Though they continue to be in captivity with very little known about their fate, neither the NSA nor the foreign ministry now think of talking about their future. “No one wants to talk about them in public,” says an MEA official. According to him, the lesser India discusses the issue the better chance it has of getting them alive. “It has to be part of a quiet diplomacy. Much of the negotiation should be beh­ind the scenes, away from the public focus,” the official adds.

Doval was also credited with getting all the political parties in Sri Lanka together in the presidential election that led to Mahinda Rajapaksa’s ouster, scuppering the island-nation’s growing proximity to China. The successful bonhomie between Modi and Bangladesh prime minister Sheikh Hasina, with India deciding to support to the hilt her effort to marginalise the Islamic fundamentalist gro­ups in the country, was also attributed to the NSA’s efforts.

However, when it came to the botch-up in Indo-Nepal relations on the Madhesi issue and the deterioration in ties following the subsequent trade blockade, the blame was laid at the door of MEA policy. Jaishankar’s inexperience in handling the neighbourhood often makes these accusations—often from supporters of the NSA—appear more credible.

Under pressure now following the terror attack in Pathankot, the Indian government is having second thoughts in continuing its engagement with Pakistan post the PM’s surprise December 25 visit. MEA spokespersons have made it clear that evidence of the terrorists being based in Pakistan has been handed over to the Nawaz Sharif government, and future engagements between the two sides depend on the action taken by Islamabad. No one, of course, is sure whether this hardline approach came from the MEA or is a convenient way for the NSA to divert the rising criticism against him.

India borrowed the idea of an NSA from the United States in 1998 to deal with the evolving situation in the wake of the Pokhran-II nuclear tests. The US had under Dwight Eisenhower’s presidency set up the National Security Council at the beginning of the Cold War. But it was not before 1953 that Robert Cutler was appointed as the first NSA in the US administration. The post, however, acqui­red its larger-than-life image under Henry Kissinger in the early 1970s when he held both the posts of the NSA and the US Secretary of State under President Richard Nixon.

When Brajesh Mishra, a former diplomat and Prime Minister Atal Behari Vajpayee’s confidant, was appointed as India’s first NSA in November 1998, Kissinger’s was the model he wanted to emulate. Mishra was both NSA and principal secretary to Vajpayee, making him one of the most important advisors to the prime minister, not only on foreign and strategic affairs, but also on key domestic policies.

However, all those who have succeeded Mishra have tried to play a role as important as his. India has had four more NSAs since Mishra. Of them, two—J.N. Dixit and Shiv Shankar Menon—were former diplomats, while M.K.Narayanan, like Ajit Doval, was a former intelligence chief of the Indian Police Service. While turf war has often crept up in the running of foreign policy and India’s dealing with key international players, controversies have erupted mostly when a non-diplomat NSA with a penchant to use the security prism has tried to play a key role in foreign affairs.

A strong foreign minister, who enjoys the prime minister’s confidence and trust, can keep the NSA’s growing influence under check. But when the foreign minister falls out of favour with the PM, the NSA’s role grows even bigger. Which seems to be the case in the present set-up.

Growing Doubts Over The Doval Doctrine