As quid pro quo for its assistance, India is looking at Northern Alliance as a bulwark against Pakistan 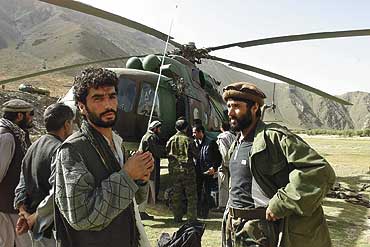 outlookindia.com
-0001-11-30T00:00:00+0553
In a first official admission, Union external affairs minister Jaswant Singh, who also handles the defence portfolio, has said that India's been providing medical assistance to the Northern Alliance. He's less forthcoming about having provided the anti-Taliban forces with arms, ammunition and intelligence support. But a source in the embassy of the Islamic State of Afghanistan in New Delhi confirmed that "we've been getting moral and strategic support as well as arms and ammunition from India". The Taliban too has in the past charged India with "using hirelings in Afghanistan to commit terrorist acts against Afghan men, women and children."

India hasn't exactly wanted to advertise its cooperation with the Northern Alliance to avert accusations of interfering in a foreign country. Now, for the record, Northern Alliance's charge d'affairs here, S.S. Ahmedi, confirmed the humanitarian support. "India has been providing food supplies and medicines. But we want to buy arms and ammunition. If any country helps us, we'll welcome that. Like we are buying weapons from Russia." The "humanitarian support" is in the form of an Indian medical team camping in the Tajik town of Farkhor on the Tajik-Afghan border. "There are three doctors and 15 nursing assistants (paramedical staff) deployed in the hospital established two years ago by India," says Dr Ayub, attache in the embassy of Afghanistan in New Delhi.

It was on the request of the Masood faction that India established a 20-bed hospital in Farkhor. Equipped with modern surgery facilities, the hospital is meant mainly to treat anti-Taliban fighters. "If the injury is very serious, then we take the injured to some other hospital. But we are happy with the assistance India gives us," says Dr Ayub. 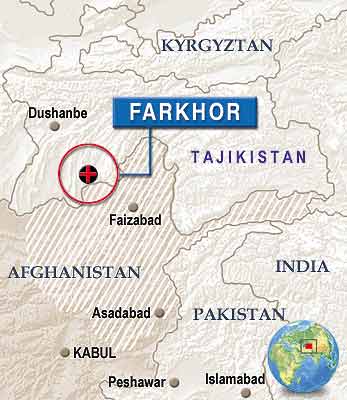 India's relationship with Afghanistan hit rough weather in 1996 after the Taliban militia captured Kabul and publicly hanged President Najibullah. With his death India lost not only an ally but a major source of intelligence on Pakistan for the Research and Analysis Wing (raw). Two years later, India stepped up assistance to the Northern Alliance although sources say we had been providing "technical and financial assistance" in the early '90s to President Burhanuddin Rabbani and Masood.

Following Najibullah's execution, raw operatives established contact and developed an understanding with Masood and his intelligence chief, Gen Mahmood Fahim Khan, in Tajikistan. India, it was agreed, would provide the Alliance full support to check the movement of the Taliban forces further north. As quid pro quo, Masood's men were to infiltrate the Pakistan establishment to gather intelligence. It was a plan described in intelligence parlance as 'third country infiltration'. But though it looked good on paper, sources say its success was limited as the Northern Alliance army made no significant headway and was suffering heavy casualties.

That Masood was interacting with Indian authorities on a regular basis came to light when one of his associates, Ravan Farhadi, revealed that he had before his death visited New Delhi and consulted top intelligence officials. "It was an indication of the high-level intelligence cooperation between India and the Northern Alliance," says a source. Masood, it's believed, was desperately seeking more troops and had requested Russia, India and Iran for funds to raise at least 20,000 more soldiers.

This is enough confirmation on India being party in a three-country coalition (along with Iran and Russia), with Tajikistan roped in to provide logistical support against the Taliban.The coalition's initial efforts had not led anywhere, with the Northern Alliance scoring little militarily. The US air strikes may change that. Indian officials met Russian and Iranian authorities recently to chalk out a plan for a post-Taliban scenario in Afghanistan.

The agenda, therefore, is clear. Should the Northern Alliance come to share power after the conclusion of the American operations in Afghanistan, India will have a strong ally to counter Pakistan. No wonder Indian intelligence operatives are in close touch with Alliance leaders.

'India Will Have To Fight Its Own Battle'