The Noise Of Silence

Musharraf has gone for the kill against militants. What does it mean for him politically? Updates 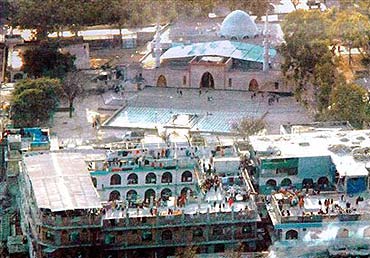 Located in the heart of Islamabad, the Lal Masjid complex houses Jamia Hafsa, a madrassa for girls, and Jamia Faridia, a seminary for boys. Their students, guided by clerics and teachers, have been on the rampage since January.

January 22: Occupy a children's library in protest against the demolition of illegally constructed mosques
March 27: Raid a house and kidnap its inmates, accusing them of running a brothel
March 28: Students take hostage three policemen
March 30: Warn owners of CD and video shops to switch to another business or face consequences
April 6: Lal Masjid sets up a Shariah court
April 9: The Shariah court issues fatwa against Pakistan tourism minister Nilofar Bakhtiar for hugging a French paragliding instructor
May 19: Kidnap four policemen after the arrest of around a dozen mosque supporters
June 23: Kidnap nine people, including six Chinese women and a Chinese man, from an acupuncture clinic, claiming it is a brothel

For nearly six long months, Pakistanis watched with immense trepidation, as also with a degree of amusement, the clerics of the Lal Masjid—Maulana Abdul Aziz and his brother Maulana Abdul Rasheed Ghazi—engage the Islamabad regime in a nervy war of attrition. Backed by the students of Jamia Hafsa and Jamia Faridia, the respective madrassas for girls and boys attached to the Lal Masjid, the two clerics indulged in acts of grave provocations, occupying a public library, abducting policemen and issuing scandalous fatwas. Every time Aziz and Ghazi mocked at the majesty of the state, angry voices demanded: why should a president espousing enlightened moderation not move against radical, unruly Islamists?