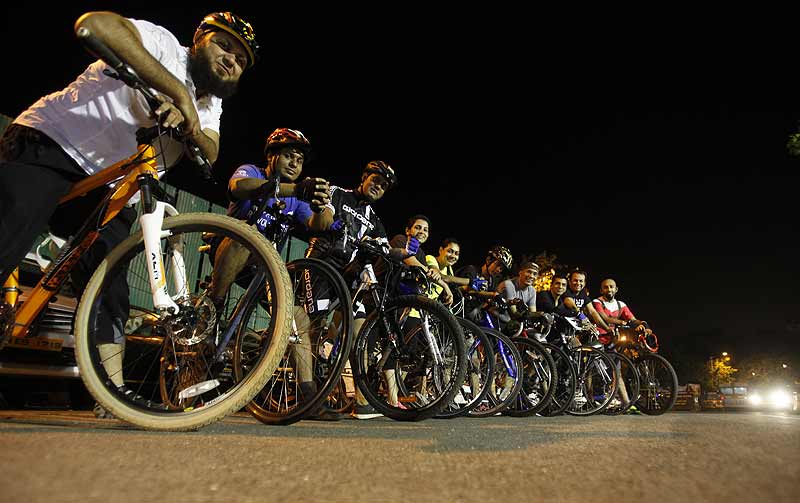 They have become a common sight in Mumbai now. You only have to park yourself on the flyover above Mahim Causeway after dark to witness the movement. Whizzing through traffic on sleek bicycles post 9.30 pm, kitted out in helmets, gloves and gear you would have only associated with Lance Armstrong, is a growing urban breed: the night cyclist. A far cry from the doodhwala bhaiyyas, and pao-delivery guys riding ponderously on their ancient iron Atlas bikes, these nouveau cyclists have plonked out anywhere between Rs 20,000 and Rs 9 lakh for their set of super-light carbon and alloy wheels for a shot at gyroscopic zen.

There are a myriad reasons why these people, who range from young college kids to middle-aged suits (affectionately called mamil—middle-aged men in lycra), have decided to hop onto bikes again. For most, their first brush with kiddie wheels came in childhood. For Shammi Sethi, 43, it was being diagnosed with diabetes and the realisation that his health was slowly spiralling out of his hands. “I realised I had to start some form of exercise. And cycling seemed like the best option,” he remarks. For Johann Daniels, 21, it was the chance to go green that got him started on cycling to college. His subsequent enthusiasm as an urban cyclist led to the Borivilli Cyclists Group, which now boasts 300 members, and “Bike Shark”, a bicycle store he opened with a friend. For Anil Uchil, a corporate communication professional who travels only on his cycle when he is travelling alone, it is the best way to blow off some steam.

“Bike groups have become the new family outside the usual social circuits you are used to, attracting different kinds of people,” says Anil, who quotes an unofficial figure of 30,000 bicycle owners in Mumbai. With the biking movement getting hipper by the day, there is even a bit of “pedal snobbery” that has crept in, between the ones who ride regularly and the ones who only turn up for “special events”. The tribe of ‘regular’ riders, however, is growing. “Three years ago, we started getting imported bikes, which look and feel expensive and were two to five kilos lighter than regular iron Indian bikes. That changed the perception of cycling in India, from a poor man’s means of travel to an expensive leisure sport,” he says.

Just going by the numbers, there sure is a ring of truth in that claim. In a year-and-a-half, the member count at cyclists.in, a forum for Indian cycling enthusiasts, skyrocketed from 5,000+ to the current 9,000+. Scheduled cycling events have also become common, from car-free days in Bandra to special fixtures like the recent Midnight Monsoon Ride. With approximately 1,000 active cyclists who cycle almost daily, it is not uncommon to see 100 to 200 people turn out for organised bike rides like the Independence Day ride, the Republic Day ride and even the ‘No TV’ Day ride. To avoid the chaotic daytime traffic and the hot, humid weather, cycling groups ranging in size from four to 50 ride through Mumbai streets every night between 9.30 pm and midnight on weekdays or early mornings on weekends.

But the biggest crowd-pullers are the cyclothons, where the number of participants swells to thousands. Zubair Lodi, 30, met Faisal Thakur in the first cyclothon and they have since set up Pro 9, a bike store that specialises in selling customised bikes. In their garage-sized shop, sleek road bikes, mountain bikes, cruisers, recumbent, triathlon and mountain bicycles jostle for space with all kinds of cycle gear. Such efforts support the cycling community and its associated native needs, but social media, and especially Facebook, has taken the curiosity about cycling to a whole new level.

“I think Facebook, more than anything else, has really connected riders,” says Meenal Sharma, a cyclist from Delhi who has recently shifted to Mumbai. It is through Facebook that many cyclists have formed online communities, which organise frequent events from midnight short rides for beginners to long-distance endurance brm (Brevets Randonneurs Mondiaux) rides between 200 to 600 kilometres for veterans. Cycling enthusiasts post ride details and contact numbers online, making it easy to break into the fold and make “bike friends” for group rides. “By uploading pictures on Facebook, cycling has reached out to far more people than it would on a cyclists-only online forums,” says Jerrit John, 32, who organised Mumbai’s first bicycle flash mob near Bandra station with Anil to attract new riders. “We have cycled to so many beautiful places like Karjat, Malshej Ghat, Madh Fort, Manori, Pune, and even Sanjay Gandhi National Park within the city that we have all become photographers,” puts in Vijay Raja, 31.

Others like Sunil Gandhi organise food rides where a bunch of hungry people ride to legendary eating joints across the city and dhabas on the highway, while the midnight rides attract the insomniacs who love the bewitchingly attractive traffic-free and quiet city. There is even a “Cycle to work” group, and though most riders are weary of reaching office all sweaty, those like Anil have found a way out: “I carry a change of clothes and freshen up once I reach office. I get a local shopkeeper or parking attendant to keep a watch on my bike,” he says.

Even commercial establishments have jumped into the cycling scene, offering incentives and organising cycling-related events. While Kala Ghoda Cafe offers a free cup of coffee or tea for patrons who turn up on cycles on Sundays, Woodside Inn in Colaba organises an Old Mumbai Bicycle Tour which offers riders a peek at the Mumbai heritage hidden amidst its skyscrapers.

It isn’t always, though, a smooth ride for cycling enthusiasts, especially if you are riding during the day in the city. Aryanka Hosbeikar, 25, is fed up of auto-rickshaw drivers inching close to her bike to catch a better look and the best bus drivers who are hardly what you would call cyclist-friendly. Most serious cyclists have therefore adopted unmissably snazzy lycra bikingwear and helmets to stand out in the chaos of the roads. After getting a taste of short rides within their home stretches (there is a South Bombay Cycling group, for example), many cyclists are graduating to increasingly ambitious rides, to the highways, riding alongside trucks and buses as their confidence grows. What ultimately drives them all is the thrill of seeing what is coming round the bend.