BPOs... Despite the screeching Qualises, fake accents and all, this sunrise industry gave us a bustling netherworld. The worry, though: what when it shifts house? 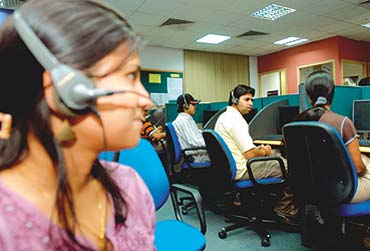 outlookindia.com
-0001-11-30T00:00:00+0553
Every evening, at 5.15 pm, the white taxis start driving, one by one, through the gates of Global Vantedge. Seven hundred smartly dressed young men and women get out, and get frisked. A sign on the wall informs them that iPods, cameras, diskettes and flash memory drives are not allowed inside this high-security world. By 5.30 pm, as America opens its bleary eyes, the employees of one of India's largest business process outsourcing (BPO) firms are at their desks, ready and waiting to dial.

Consider a life measured out in eight-hour shifts, finishing either late at night or in the early hours of the morning. Where one shift entails calling 300-400 Americans or Europeans, many of them furious at having to discuss their cellphone troubles or credit card bills with someone in India. You negotiate the unusual hours that your job demands, sacrificing your life with family and friends. Yet, outsiders perceive the work you do as somehow unskilled—a job anyone can do. The secretive nature of the BPO industry fuels these misperceptions. Few know what goes on inside a call centre.

For Kanika Khatri, a 20-year-old from New Delhi who has worked at Global for over a year, there were shocks in store: "I thought working here would be a laugh when I joined. But this is a completely target-oriented business." She adds gloomily, "I constantly need to prove myself, there's so much pressure from people with more experience. But if you work hard you can cope."

Walking through the calling floors, you hear a curious mishmash of accents and American idioms, as agents try to establish a working rapport across oceans and continents. After listening to a few conversations, you can easily tell the newbies from the veterans. The novices tend to drift in and out of the flat midwestern American accent they are trained to speak in, betraying their roots with a typically Indian phrase or by pronouncing words the desi way. When I interview them, they stutter. The "vintage callers" (industry lingo for agents with a few years of experience) are comfortable in their acquired accents, and handle abusive or racist customers with more assurance than I could ever have mustered.

On the balconies where agents take their cigarette and coffee breaks, young men snatch a few whispered words with their girlfriends before heading back to their desks. With so many young people around, office romances are bound to flourish, and some end in marriage—BPO-style. Sheetal, a call quality specialist, and Sudhanshu, a team leader, got married last year. But though they work on the same floor, they hardly see each other during shifts. "Sometimes we don't see each other on weekends because one of us has to work. And if we're not on the same shift at night, we can't even meet up for a coffee during breaks. It's tough, but everyone has to make sacrifices early on in their marriages," says Sheetal stoically. 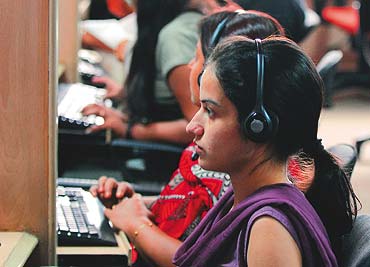 So, what's so great about BPO work? The big plus, for the large numbers who fail (or rather, are failed by) our education system, is the chance to get decently paid work without academic achievements. Many employees joined straight from school, giving college a miss altogether or pursuing degrees half-heartedly through correspondence courses. The only criterion for career advancement is delivering results—if you're helping the bottomline, you're on your way up. Vijay Kakar, one of Global Vantedge's longest-serving employees, a veteran of almost five years, joined as an 18-year-old and worked his way up through the complex hierarchy of agent levels, from caller to assistant manager, totally on performance. "No one here cares that I didn't go to college. I'm now earning five times more than when I started," he tells me.

Later, I catch up with two executives of a smaller BPO for a pre-dawn meal at a small restaurant along NH 8, the artery that supports Gurgaon's role as backoffice to the world. Sharad Bajaj, executive director of the Offshore Business Group, tells me: "Many of these kids come from backgrounds where they've always been told they're not good enough, or that all they can do in life is help out in their father's tiny shoe shop. Then they come here, work in a plush office, get taken care of, learn to make a difference in a global business. We're not promising them the world—just the chance to be part of the New India."

There is a flip side to this, of course. If the BPO industry stops growing by 2010, as some studies project, or the offshoring industry shifts to another part of the world, an army of underqualified youngsters accustomed to big pay packets will be released into a job market that won't have much to offer them.

It's hard, though, to think depressing thoughts when I'm surrounded by scores of optimistic young people relishing their first taste of responsibility. At 1.30 am, I'm outside the Vantedge office, watching the members of the first shift depart. This is a 'casual week'—employees are allowed to dress informally rather than in the regulation trousers and shirt, as a special bonus—and the scene resembles a college campus anywhere in India. Young people mill about in rock band t-shirts and baggy jeans, joking, laughing, smoking, exchanging phone numbers and making plans for the weekend. I watch them, struck by the incredible diversity of the people working in this industry. North, South, East and West, women, men, all faiths and hues—and everyone seems to be getting along. Dhruv Rakha, the HR employee assigned to show me around, tells me some have travelled all the way from Nepal. The glow of economic opportunity has made Gurgaon a happy meeting place for disparate hopefuls from all corners of our nation, and beyond.

Daughter Of The Dust