The Necessity of Peace 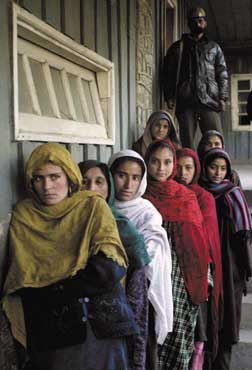 outlookindia.com
-0001-11-30T00:00:00+0553
Moving at a fast pace on Kashmir, New Delhi appears to be hogging the limelight, leaving Pakistan to chase the illusion of peace on the borders. Delhi's initiatives have forced Islamabad to take a hard look at the consequences of involving itself in the Kashmiri movement and contemplating ways of winning diplomatic battles without being perceived as having let down the mujahideen.

Emerging from a meeting with representatives of mujahideen groups in Islamabad, Institute of Strategic Studies director-general Shirin Mazari told Outlook: "Barring one or two groups which believe that jehad knows no borders, these mujahideen are not that apart on the substance of the issue. If there are differences between the Hurriyat and the mujahideen groups here, these relate to the modalities. If the Hurriyat represents the political side, then the other is the fighter on the ground."

There are other reasons for the Kashmiri mujahideen to think of peace. Argues noted columnist Ayaz Amir: "The stark truth is that jehad has no future in Kashmir. A continuation of the insurgency can bleed India, as it has done with creditable results over the past decade, damage its prestige and keep the Valley on boil. But it can't secure the liberation of the state."

Pakistan, too, has a vested interest in peace because many here have serious doubts about Islamabad's ability to control the belligerent mujahideen groups.

This was obvious recently at Akora Khattack, about 100 km from Islamabad, where dozens of religious parties had gathered to protest against the UN sanctions imposed on the Taliban. Displaying weapons openly, these militant groups cocked a snook at the laws banning carrying of arms.

Many, including the liberal segment in the military establishment, fear these groups have been so emboldened that they might, as they did in Afghanistan, undertake Pakistan's Islamisation. And one way of obviating this threat is to resolve the Kashmir problem and undermine the rationale of their existence. The moot point, however, is in what manner can Islamabad prevail on the Kashmiris, when those from India meet their brethren in Pakistan, so that it can salvage something from its involvement in Kashmir since 1989.