The rape of CRZ norms is what exposed us. Will the Centre now kill CRZ altogether? 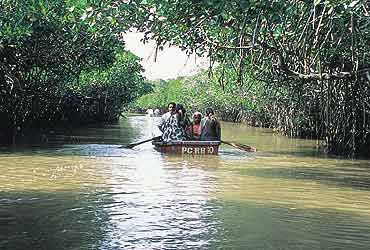 Nobody blames the environment minister for the tsunami. Neither is the government expected to claim responsibility for every quake, flood and cyclone that comes our way. But the reason why activists and environmentalists are up in arms is that the scale of devastation could have been far less had the various state and central governments heeded the many warnings about destruction of coral reefs, mangroves and sand dunes along the coast—our natural buffers against oceanic disturbances.

How vital is it to follow environmental norms strictly? Well, the point is being driven home as more and more stories emerge about the "natural line of protection" having saved many lives by absorbing the first shock of the tsunami waves. An example cited repeatedly: the Maldives. A country of 1,190 tiny islands averaging three feet above sea level with no high ground to offer refuge, the coral reefs absorbed the impact to restrict the death toll to 85. In sharp contrast, the impact was far greater along India’s east coast despite the fact that it has far greater land mass and high ground. Most of the natural buffer systems are no more here.

Says Debi Goenka of the Bombay Environmental Action Group, "Unsustainable development, including deliberate land reclamation for urban and industrial development and widespread shrimp farming, has led to the wiping out of mangrove forests." Nick Nuttall of the United Nations Environment Programme (UNEP) says mangrove swamps have disappeared rapidly in recent decades in tropical countries like India. Speaking to Outlook from Nairobi, Nuttall said, "For low-lying coastal areas and small island states, a lot of their protection comes from coral reefs, beaches and mangrove swamps. The last decade has seen mangrove swamps being cleared rapidly to make room for tourism facilities and infrastructure. Prawn and shrimp farming are other culprits. Clearly, low-lying areas will have less defence if they lose their frontline buffers."

This is why areas like Pichavaram and Muthupet in Tamil Nadu which still have dense mangroves, suffered fewer casualties and less property loss. Even during the supercyclone that ravaged Orissa in 1999, villages in and around Bhitarkanika, the second largest mangrove formation in India after the Sunderbans, suffered far less damage. The cyclone washed away entire villages along the coast but Bhitarkanika was saved from its fury. Ashish Kothari of Kalpavriksh, along with a number of eminent activists, has written an open letter to the ministry of environment and forests (MOEF) pointing out that instead of being a watchdog for saving the environment, the MOEF has become a "clearing agency" for unsustainable and destructive commercial activities. Kothari points out that "in violation of Supreme Court orders, the MOEF has refused to close down the Andaman and Nicobar Islands Forest and Plantation Development Corporation that has been destroying the forests and the habitat of the tribals.... Orders to control mining of sand from the beaches of the islands and deal with inappropriate tourism too have not been satisfactorily complied with."

Studies conducted by the US-based Earth Institute point out that mangrove forests once covered three-quarters of the coastlines of tropical and sub-tropical countries, but only half of that area remains intact today. The institute’s Mangrove Action Project says vast tracts have been cleared to make way for shrimp farms in developing countries like India, and that the state has been unable to adequately regulate the industry.

The tragedy, says Medha Patkar of the Narmada Bachao Andolan, is that the environment is not at the core of the development planning in our country". Neither human life nor the environment is taken into account when big projects are planned. Raising environmental concerns is seen to be anti-development. You can’t even question totally unscientific projects like river-interlinking which will wreak havoc on the environment," Patkar says.

Despite India formally regulating construction and development within 500 metres of the coast by declaring it as Coastal Regulation Zones (CRZs) through a notification in 1991, ecosystems in these areas continue to be under threat. The notification divides the coast into several zones. In Zone I fall the most sensitive areas that have mangroves and coral reefs. Here, no development is allowed within 500 metres of the coast. Zone II has towns and cities where new construction is permitted on the landward side of the existing structures. Zone III includes undeveloped areas and tourist places where permission is given on a case-to-case basis. Zone IV covers areas like Andamans and Lakshadweep where no construction is allowed within 500 metres of the high tide line. The notification imposes restrictions on the setting up and expansion of industries but various states have been flouting the CRZ norms with impunity.

For example, since the issuance of the notification, Goa has approved around 75 hotel projects in violation of norms. Similarly, according to a committee set up by the Karnataka HC under Justice Hosbet Suresh to look into CRZ violations along the 287-km-long Karnataka coast, there are 45 prima facie cases of violation. The report, submitted by Justice Suresh, said that the Karnataka Industrial Areas Development Board (KIADB) had allotted land for setting up industries in CRZ areas of Tannir Bhavi village near Mangalore. "The creation of any large industry in the CRZ area creates concomitant ecological degradation," the judge concluded.

The government has now taken steps to review the CRZ norms with a committee set up under Dr M.S. Swaminathan. This move too has its critics with Debi Goenka saying it’ll end up in the "dismantling" of the CRZ. "The MOEF has gone to great lengths to ensure that the committee does not meet environmental groups. We are still grieving the thousands who died, and the ministry is busy destroying the CRZ notification," Goenka says.

Kocherry, in his letter to the environment minister, has also urged the scrapping of the committee. "You and the previous governments have been trying to dilute the CRZ notification. Now that the destruction has taken place, let us learn from it. Please scrap the Swaminathan Committee. Please see that the lands are acquired to shift the entire fishing community beyond 200 metres as per the CRZ notification. Please put up the sea wall along the 200-metre line...and mangroves along the sea wall. Please stop destroying mangroves in the name of aquaculture," he wrote.

The environment minister refused to answer queries relating to the CRZ notification review, but Outlook did speak to Dr Swaminathan. "Our intention is to strengthen the ecological security of the coastal areas. I have been personally involved in regeneration of mangroves in coastal areas for the past 15 years. The committee will look at all aspects very carefully," he said. The sceptics though refuse to take his assurance at face value. But with a figure of almost 15,000 dead troubling its conscience, the government will have little choice but to act.

By Poornima Joshi with Sanjay Suri in London