We wanted a raise. BCCI said no. In reply, the team took on Pakistan. 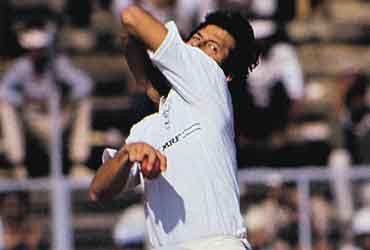 outlookindia.com
-0001-11-30T00:00:00+0553
The Indian team, after a real mauling at the hands of the mighty West Indians in 1989, had decided to earn some pocket money. On the way back from the Caribbean and against the wishes of the BCCI, they played a couple of exhibition matches in the USA. The BCCI, riding a wave of public outrage against the Indian cricketers, decided that a ban was an appropriate action. The players sought legal help and the courts decided the BCCI was wrong in treating its players as bonded labour and went on to rap the board on its knuckles for high-handedness.

It was a major victory for the Indian cricketers. They thought it was now the perfect time to make what they thought was a long overdue demand to the BCCI. A pay hike. A hurriedly formed players' body, quite amateurishly, demanded a more than twofold increase in remuneration. The BCCI smartly gave these numbers widespread publicity, to show the cricket-loving public how a team, just humiliated on the cricket field, was shamelessly asking for more money when they ideally should have been looking to improve their cricket and save the nation from further embarrassment.

That BCCI move worked beautifully. The Indian team, in a bid to win the public goodwill back, decided to tour Pakistan 48 hours later without accepting a single penny from the BCCI. "We will just play for pride," was the announcement from the team. That was India's 'preparation' for one of the toughest tours of the decade. That India still managed to draw the four-Test series against arguably the second best team in the world at the time remains one of our cricket's major accomplishments.

Pakistan and its players tend to give you plenty of memories. I will never forget how on the first day at the nets in Karachi, there was this sudden uproar in the crowd who had assembled to watch the nets. The reason, we discovered, was a certain Mr Abdul Qadir sprinting after a spectator who was running for his dear life. Really petrified by now, the spectator had almost reached Carl Lewis's sprint speed and kept going for a good five to seven minutes. Abdul Qadir, more known for his magic with the wrists than his sprinting qualities, was fighting a losing battle, until the police came and took the man away.

We learnt later that the man had pinched Qadir's bottom. We just couldn't stop laughing, recollecting that sight of a Pakistani great running after a man from the street with that same determined look that he would have when looking down the pitch at a No. 11 batsman for his fifth wicket of the innings.

Personally I had a pretty good tour as a batsman. Which meant I spent more time on the field than off it and hence have more memories from on the field. Also life can be quite restrictive for an Indian team in Pakistan.

Imran Khan took it upon himself in that series to prove to the world, and especially India, that Pakistan could win at home without help from the local umpires, as was the common perception. Disregarding local sentiments and political pressures, he got the PCB to hire two seasoned English umpires, John Holder and John Hampshire. At the time it was a very unique and brave decision. It was a desperately important series for Imran Khan, and he wanted to leave nothing that the Indians could later use as an excuse for their defeat.

But Imran could not realise his dream. India drew the series 0-0. Along with some real spirited Indian batting, Imran's young fast bowlers, through injuries, kept letting him down at critical times on pitches designed for them. Imran though, at 38, was like a determined workhorse, bowling almost 30 overs a day and batting with a lot of grit right through the series.

India returned home to a nation that had forgotten all about the pay hike issue and was happily welcoming an Indian team that had, to be honest, surprised them by not losing a single Test to a very strong Pakistani team. But the one dominating memory from that tour for me was one man. That man, who not surprisingly, apart from a 16-year-old Tendulkar and me at the other end, was the only one who heard that faint nick from Tendulkar's bat to be caught down the leg side at Faisalabad. It was none other than Imran—desperate to win the mother of all sporting rivalries.