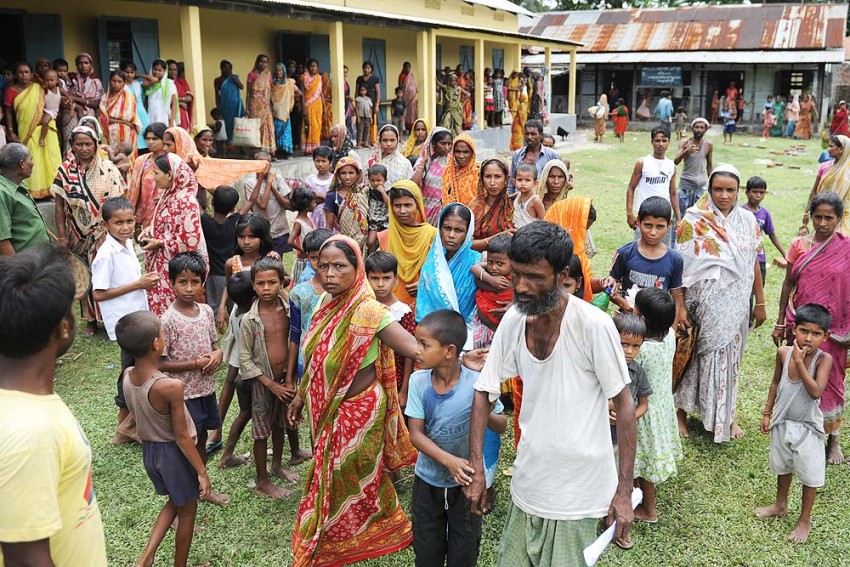 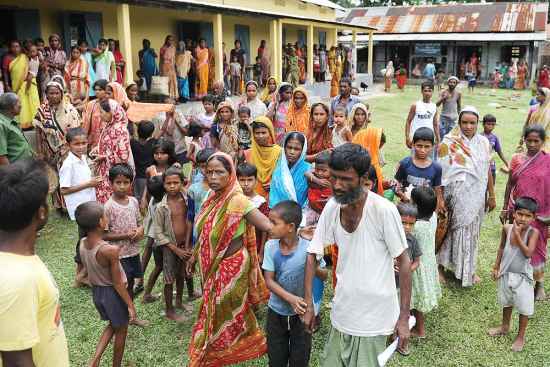 Decline in fertility across religious groups. Rate of decline is higher among Muslims than Hindus

Nine years before the unofficial leak of the ‘religious census’ data on January 22 and four years before the 2011 census itself was undertaken, the Sachar Committee report had in 2006 projected that Muslims would constitute 14.2 per cent of the Indian population in 2011. The data leaked in January 2015 puts the Muslim population—for 2011—at exactly that predicted percentage.

The projection, demographers point out, were based not on ‘conversions’ but on purely scientific criteria. The exercise took into account fertility rates, the prevailing sex ratio and other such factors before projecting the numbers for different groups. It has therefore come to them neither as a surprise nor as a shock. The slow growth of the Muslim population and decline of the Hindu population, they hold, will take place for several more decades before flattening out and stabilising.

Given the current growth rate, they project that Muslims in India will constitute 18 per cent of the population 90 years from now, in 2101. At that stage, the Muslim population will stabilise and Hindus will account for nearly 75 per cent of the total population. This four per cent increase, which will take place over nearly a century, is what the Sangh parivar is describing as the “Muslim takeover of a Hindu nation”.

“The situation is far from the enormous gap in fertility rates, say, between Arab Muslims and Jews in Israel.”
Prof Sonalde Desai, University of Maryland, US

The lower incidence of female foeticide among Muslims than among Hindus could be a factor here. This is borne out by the relatively higher sex ratio of Muslims compared to that for Hindus for all age groups, and especially in the below-five-year category.

The average figure for the number of children each Hindu woman bears is around 2.65, and it is 3.09 for a Muslim woman, according to the nhfs. “Stat­istically, there is a difference of less than half a child between the fertility of Hindu and Muslim women,” says Prof Sonalde Desai at the department of sociology in the University of Mary­land. “And this too will come down with the declining trend of fertility among Muslims. It is only a matter of time before the gap narrows substantially. We are stabilising all aro­und and there is absolutely no cause for alarm.”

Both Hindu and Muslim populations have grown in absolute terms. While the Hindu population increased by over eight crore, the overall share of Hindus reduced by 1.3 per cent to reach 78.3 per cent. This is because of the slightly hig­her growth rate for Muslims, whose share in the population has increased by less than one per cent, from 13.4 per cent a decade ago. However, the growth rate of Muslims too has seen a welcome drop from 29 per cent in 2001 to 24 per cent in the 2011 census, demographers stress. 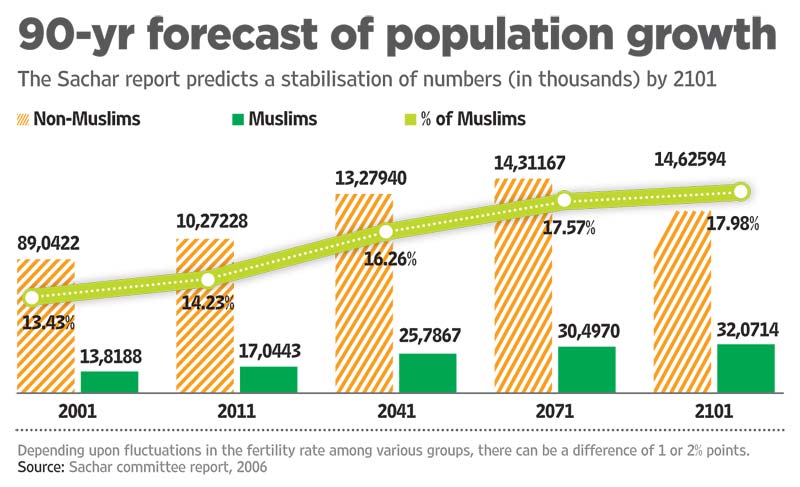 This, demographers say, fits squarely into the pattern of declining fertility rates for all communities due to an increase in literacy rates and increasing use of contraceptives. “The socio-economic profile of Muslim women is the worst compared to those of all other religious communities. Muslims have the lowest percentage of women working outside the home, when compared to all religious communities, partly due to religious constraints. This is the primary reason for the slightly higher fertility rates among Muslims,” says Dr Irudaya Rajan from the Centre for Development Studies (CDS).

“In Malappuram, fertility rate of Muslim women has declined by over 50 per cent due to better employment opportunities.”
Dr S. Irudaya Rajan, CDS, Kerala

The bogey of a ticking Muslim population bomb is a heaven-sent for a Sangh parivar hell-bent on ghar wapasis to augment Hindu numbers. Pleas are being made across the country by BJP leaders like Sakshi Maharaj and Sadhvi Prachi to Hindu mothers to have four to 10 children. The Shiv Sena has now gone to the extent of announcing a prize money of Rs 21,000 to women who have 10 or more children. “It is our practice to honour large families,” Anil Singh, their regional president in Uttar Pradesh, says blithely. “Why should we Hindus stop reproducing? We have to counter the uninhibited growth of Muslims, who do not subscribe to any contraceptive practices.”

Also, in all the brouhaha over a declining Hindu population, not a word has been uttered about the unfortunate decline of the Scheduled Tribes across the country. The ST population is witnessing a negative growth rate, which is also seen as contributing to the decline in the overall Hindu population, as STs and SCs too are clubbed under the category of ‘Hindu’ in the religious census. The census allows the enumeration of India’s population only under six broad reli­gious communities—Hindu, Mus­lim, Chris­tian, Sikh, Jain and Buddhist.

While the leaked data shows migration as a cause of increase in the population of Assam and West Bengal by over two per cent, demographers see this simply as an attempt to accentuate anxiety over the Bangladeshi immigration into the country. “While the Muslim population in India is currently around 13 crore, migration into the country from Bangladesh does not exceed more than 10 lakh. This is an insignificant number and does not contribute to any substantial increase in the population,” says Prof P.M. Kulkarni of the School of Social Sciences at the Jawaharlal Nehru University in Delhi.