The Music Stopped...In The Lurch 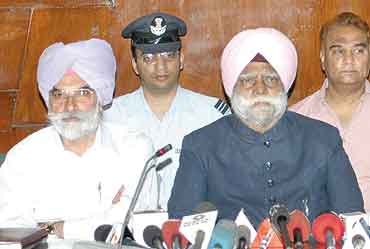 outlookindia.com
-0001-11-30T00:00:00+0553
President’s rule has turned out to be a singularly bad joke for the state’s residents. Even people who have suffered through 15 years of Laloo raj feel that Buta raj is nothing less then unmitigated disaster. At least Laloo Prasad Yadav had been an elected representative. Governor Buta Singh isn’t, yet he seems vulnerable to the same pulls and pressures of the state’s criminal strongmen. The controversial transfers of 17 ips officials created a furore last week that reverberated from Patna to Delhi. The banner of revolt was raised by chief secretary G.S. Kang, handpicked by the governor just a few months back. After the latest rounds of transfers, an angry Kang went on protest leave, saying he was being sidelined and could not work under the present dispensation. To add to the din, BJP leader Sushil Modi declared: "The transfers were made at Laloo’s behest. Buta is completely under Laloo’s thumb."

That does indeed seem to be the case. Having a grip over the administration is vital for Laloo whose invincibility has already been breached. With the state headed for another election in a few months, the master of subaltern politics faces the battle of a lifetime. Particularly revealing has been the transfer of the high-profile Siwan SP Ratn Sanjay who had in a few months zealously pursued the mini-empire of RJD MP and notorious don Mohd Shahabuddin. Moreover, the 17 transfers come on the heels of the shunting around of nearly 300 officers since the imposition of President’s rule four months ago. Now the EC has stepped in to direct Buta not to transfer any more officials till elections are over. The signals emanating from the EC suggest that polls could take place in November this year. But that’s only if the SC does not stall the process. The apex court is on the verge of ruling on a pil that challenges the dissolution of the Bihar assembly. Bihar’s politics, it appears, will forever be bogged down in complex alliances, and unending judicial debates.