The Mouse Ran Down The Clock 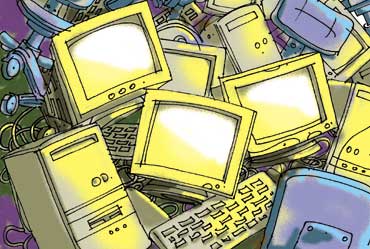 outlookindia.com
-0001-11-30T00:00:00+0553
On a rainy evening, in an uptown Mumbai apartment, a pleasant elderly man is holding his whisky and speaking the truth, for they normally go together. Arvind Shah, chairman of Boston Education and Software Technologies, looks at the partying men in front of him and shakes his head: "You see those people? Many of them are in the education business and I know they are not happy. Some of them will admit it, revenues have fallen by 50 to 70 per cent. Things are very bad." So bad, that for a man who is drinking, the word 'quarter' this evening only means April-May-June. "First time in 10 years," he says, "I made a loss. This quarter." Boston lost Rs 2 crore between April and June this year, raking in only Rs 3.5 crore. For the corresponding quarter last year, it had made Rs 5.5 crore. "And it will only get worse unless some drastic steps are taken." But he looks intensely at his whisky and says with a smile: "Those steps will be taken. We will survive." He will, like Johnnie Walker says, keep walking.

All the top institutes are in the same mood. Leader niit's net profit plunged by 93 per cent this quarter, a meagre Rs 5.2 crore, compared to Rs 78 crore last year. Aptech's fell by 94 per cent. Datapro, which trains over 40,000 students in 300 centres, has registered a 15 per cent drop in student registration and revenues this quarter, usually the busiest period in the enrolment calendar. ssi's earnings before interest, depreciation, taxes and amortisation (ebidta) this quarter was 25 per cent of the turnover, compared to 37 per cent for the full financial year of 2000.

The computer education industry in India, with over 2,500 institutes, both established and dubious, and valued at over Rs 850 crore, is trembling as the mindset of students has changed drastically after realising that this industry has spawned one of the biggest scams in the country (See "Network Terror", Outlook, June 18, 2001).

Of the 15 lakh students who did some kind of a computer course last year, only 30,000 got jobs. At the upper end of the education market segment, things are not any cleaner. According to Dataquest, 5 lakh students did niit courses last year, and by the institute's own trumpeting through press ads, only 16,000 got jobs. The crisis, of course, has been triggered off by the American tech slowdown. Students are realising that computers will no longer be a guarantee for a good life in the US. Worse, an overwhelming majority of undergraduates who contribute to 70 per cent of the industry's revenue have discovered that quickie courses will get them nowhere.

Admits Aptech ceo Pramod Khera: "They're waiting and watching. The number of students opting for short-term courses has fallen by 30 to 40 per cent this year." For the quarter ending June, his company's income was Rs 79.8 crore compared to Rs 138.17 crore for the corresponding period in 2000. The net profits were just Rs 2.19 crore as against Rs 37.12 crore last year. He adds: "The slowdown of the US economy is chiefly responsible for this scenario. The Indian IT industry is heavily dependent on the US market and the media's hyping up of the return of Indian professionals from there has affected the students. Short-term courses have been more affected than upper-end long-term career courses. Of the 4,30,000 students who joined us last year, about 2,00,000 opted for short-term courses. It's this category where we have a 30 to 40 per cent drop in registration, while the overall drop in student registration is at 20 per cent.With the dotcom collapse, the demand for Java was already low. Now it's worse." But he says that when people say "Java is dead in India", they are being "extreme". However, noted computer educationist Vijay Mukhi disagrees. "Students are not buying books even. My book on Java only sold 2,000 copies in four months, while four of my C-Sharp books sold 25,000 copies in four months. I'd say Java is dead in India."

Mukhi is among the very few trainers who is not affected. "That's because I am small—I teach only about 100 students every year. But inquiries from students have gone down sharply," he says. He adds that even in this depressed market condition, the computer education industry could have done well if only it had built a knowledge-driven model instead of a job-driven one. He was among the first presidents of a body called National Association of Computer Trainers which has over 950 members. "But I am not associated with it any more because they don't feel quality teaching is a priority," he says.

That's why Aditya Jha, Big Leap's ceo, says most institutes sell courses like "soap or tea". Big Leap, Jha claims, focuses more on the fundamentals than rushing to teach 'hot' languages with a stress on the student's aptitude. Says he: "There are two models in the IT training industry: The revenue maximisation model and the Big Leap model, which is a learning maximisation model. The former focuses on enrolling as many students as possible. So there are no screening tests to check the aptitude of the students. At the same time, it offers a wide range of courses, from MS Office courses to ejb, .Net, wap etc. In this model, turnover of students and lowering the price barrier are very important. Therefore, a lot of short-term courses are offered. Also, no one can be failed because he'd then continue to occupy the chair that could fetch another Rs 10,000. Recently, niit came up with a press announcement that they are planning to add 700 new franchisees. Every franchisee pays about Rs 5-8 lakh. This at a time when their existing franchisees are suffering. There's no thought on improving their education model, just following their revenue maximisation model."

Jha reminds you that in a crunch situation, it is always a student with strong fundamentals and knowledge who wins, and not the one who has some certificates to show. This is a point institutes are beginning to understand according to A.D. Narula, a director of Datapro, which is celebrating its silver jubilee "this bleak year". Says he: "Forget all the claims. A mere course never gets a student any job. It's his educational background and personality. The focus should be on these things. If a student doesn't have the right educational qualification or the personal attributes that can take him further in the industry, then he must be told before he wastes his money."

Interestingly, in this gloomy environment walks in another player. Gurukulonline's e-learning. The logic of this entrant is that since one of the primary problems of brick-and-mortar institutes is poor quality of faculty, e-learning can make some valuable corrections. Says ceo Shailesh Mehta: "It's difficult to produce quality at thousands of centres, dispersed geographically. As a result, courses are rarely completed in time and delay of two or three months is normal. e-learning, on the contrary, offers a large variety of courses over the Net. A few good teachers can benefit a large number of students."

The conventional computer education industry, however, has no reason to shut shop and go home. There is still a high demand for software professionals. Points out B.G. Menon, ceo, ssi Education: "The supply-demand gap has not gone away. Student enrolments will jump once the first upturn in the services market becomes apparent." According to Nasscom, engineering colleges produce 1,40,000 engineers every year. Says Jha: "Even if there is an increase in this output, it will fall by 50 per cent of the requirement for pure software developers."

But the requirement is not merely for programmers. It's for good programmers. And an overwhelming majority of institutes do not have the resources to give high quality education at most of their 6,000 centres. That's why they say, every silver lining has a dark cloud.

Alone In The Crowd