Dasrath Manjhi, the 'mountain man', dies. His one act inspires all. 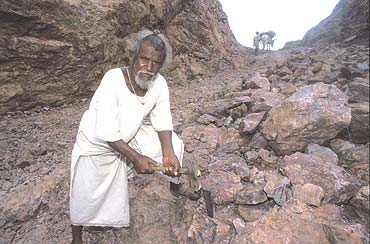 outlookindia.com
-0001-11-30T00:00:00+0553
Every morning, for 22 long years, a frail, diminutive man, barefoot and clad in a loin cloth, would trudge two kilometres to a hillock of solid rock and chip away at it with a hammer and chisel. Bemused onlookers thought he had lost his mind, and he was an object of great fun for village urchins. But the women of the village, young and old, admired him, for his was a labour of love.

Dasrath Manjhi was building a memorial to his wife Phaguni Devi—one that won't ever find a place in hallowed global must-visit lists, but can well be passed down from this generation to the next as a monument of love. A poor man's Taj, literally. Not for its aesthetics, but for the way it symbolises the human spirit's capacity to endure, its indomitability. Dasrath had undertaken a Herculean task, perhaps unequalled in recent human history. The direct beneficiaries may be few—the residents of Gelaur, a remote hamlet in Bihar's Gaya district—but the act itself is a gift to us all: a fable for our times.

Today, a week after his death, Dasrath Manjhi is remembered by everyone in his village as 'Dasrath Baba'. In caste-ridden Bihar, under normal circumstances, he would never have qualified for this title, which only a Brahmin is entitled to. Dasrath was a Musahar, a caste which traditionally ranks among the lowest of the low. Musahars derive their caste name from their unusual occupation—they dig through rat-holes after harvest, and forage for the grain stored by bandicoots (moos in the local lingo) under the ground. When there's not enough grain, they've been known to hunt and eat the bandicoots to keep hunger at bay.

Dasrath eked out a living as a farm hand, toiling in the fields of local landlords on bare subsistence wages. One day, in the early '60s, his wife Phaguni fell ill and Dasrath set off with her to the nearest hospital. She died on the way. If only there was no hill blocking the road to the town, Dasrath would have made it to the hospital in time, and perhaps his wife's life would have been saved.

The villagers of Gelaur had to take a circuitous route and travel 19 km to Wazirganj, the nearest district town. This was because the massive 360 feet long, 25 feet high and 30 feet wide sheer rock came in the way of the shortest possible route between the village and the town.

The situation would have brought about a feeling of resignation or fatalism in the average man—as if God had himself put this giant obstacle in the path of his ailing wife. Dasrath's response was different and radical—at once unthinkable and stunningly simple. He decided to alter geography with chisel and hammer. To cut a road through the huge mass of rock.

After 22 years of back-breaking, single-handed toil, Dasrath finished in the mid-'80s. The mountain had yielded to man. Now, Wazirganj was just about six kilometres away, the people of Gelaur could reach it in under an hour.

His self-set target reached, some villagers advised Dasrath to meet the then chief minister, Laloo Prasad Yadav, with the plea to construct a pucca road between Gelaur and Wazirganj. "After all, Lalooji had promised the people of Bihar roads that were as smooth as the cheeks of Hema Malini," recalls Bujhaval Manjhi, a 73-year-old farm hand from Gelaur. "Lalooji did direct his officials to take necessary action. But, as happens with such promises, no action was taken even during the tenure of Rabri Devi." Dasrath might have become a local hero, but his voice counted for nothing with the state government. Dasrath himself remained a humble, self-effacing man, doing nothing to attract publicity for his titanic feat of endurance. It didn't even bother him that the Limca Book of World Records misrepresented his achievement by giving wrong statistics that significantly reduced the size of the rocky hill he cut through, chip by chip.

A few months ago, when an ailing Dasrath was egged on by the villagers to petition Chief Minister Nitish Kumar on their behalf and remind him of Laloo's promise, he went to the CM's 'janata durbar' in Patna. Nitish received him with honour, made arrangements for his medical treatment at the All India Institute of Medical Sciences in Delhi, and even offered Dasrath his own seat at the durbar. If this was a move to bring the CM favourable media publicity, it succeeded admirably.

More importantly, Nitish not only promised the pucca road connecting the village to Wazirganj town, but also a hospital in Gelaur itself—to be named after Dasrath. The land on which the hospital would come up had earlier been allotted to Dasrath, but the typically selfless man would rather that a hospital be built on the plot. It is a poignant irony that just a few weeks later Dasrath himself died at AIIMS—far from the place where he had spent his life in selfless toil, and where he continued to live in obscurity.

The recognition that had been denied Dasrath during his lifetime finally came after his death. The Nitish government arranged to bring his body to Gaya. Dasrath was given a state funeral last Saturday at his village, his body draped in the tricolour and men in uniform serving as pall-bearers. Besides the CM, Bihar assembly speaker Udai Narayan Choudhary and sundry legislators were present. Dasrath's mortal remains were not consigned to the flames but buried in accordance with the Kabir Panthi tradition.

The chief minister paid fulsome tributes to Dasrath's "perseverance and dedication", describing him as "a great soul". But in Gelaur they have a more apt sobriquet. They call him "the man who moved a mountain".