The Most Popular Composer 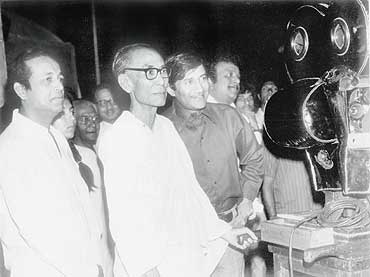 S.D. Burman had a sound base in Indian classical and folk music but could also be hip and trendy for his times, which helped him forge an easy connect with people. Despite the classical grounding, his songs had an endearing lightness and zest, a quality that still makes them sound fresh and contemporary. He remained much in demand till the very end of his life, even at a time when his own son, R.D. Burman, was on the rise.

Born in the Tripura royal family, he began his training in classical music under his father, sitarist and Dhrupad singer Nabadwipchandra Dev Burman. He later continued his training under Ustad Badal Khan and Bhismadev Chattopadhyay. His early work for radio was based on Northeastern folk-music. He worked as a music director in Calcutta in the late 1930s before moving to Bombay in 1944 and got his first major break with Do Bhai (1947). He began composing for Dev Anand’s production company, Navketan, with the film Afsar (1950) and after the success of Baazi (1951), it turned into a long and fruitful association. Burman’s composition, Mera sundar sapna beet gaya and Tadbir se bigdi hui taqdeer gave a big boost to the career of Geeta Dutt.