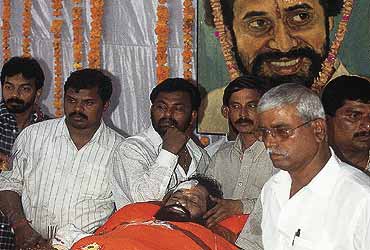 outlookindia.com
-0001-11-30T00:00:00+0553
An outburst of the Shiv Sena's penchant for lumpenism was perhaps a fitting farewell to a leader who embodied the party's belligerent spirit. On the night of August 26, scant hours after Anand Dighe—the party's powerful Thane district chief—had succumbed to a heart attack, the local Sunitidevi Singhania Hospital, where he was recuperating, itself became the target of a rampaging mob.

Dighe, 49, had been admitted to the hospital after his jeep collided with a bus in Thane, barely two hours away from Mumbai. Doctors performed an emergency orthopaedic surgery on the morning of August 26, after which he was conscious and even received visitors. However, towards the evening, he suffered a massive heart attack and could not be revived.

Although Dighe, a bachelor, was known to be a heavy smoker and had survived an earlier cardiac arrest, rumours of negligence flew thick and fast after his death was announced a little after 10.30 pm, with disastrous consequences. A restive mob of over 1,500 Sainiks ran amok for more than three hours, reducing the 200-bed hospital into a mangled mess. The police did little but gape till the fury subsided. It was all too reminiscent of the 1993 Mumbai riots.

While terror-struck patients, doctors and nurses fled for cover, Dighe's followers destroyed ambulances, wrecked beds and equipment and set the building ablaze. The hospital sustained damages worth an estimated Rs 8 crore. The marauders also demolished a Raymonds showroom belonging to the JK Group, which also owns the hospital.

Distraught group chairman Vijaypat Singhania demanded an apology from Sena chief Bal Thackeray. "We call Pakistan a terrorist state, but is Thane any better?" he asked. The police have lodged cases against 1,100 Sainiks and arrested 122 of them.

The massive turnout at Dighe's August 27 funeral was testimony to the following he had managed since he joined the Sena in the early 1970s. Around one lakh people crowded the Arya Vidya Mandir grounds where his last rites were performed. Local cable channels even beamed the footage.

Meanwhile, Thackeray was conspicuous by his absence. He said that he had started for the funeral but was contacted by the police and asked to stay away for security reasons. The home department, however, denies this. Senior Sena leaders say that the relationship between Dighe and Thackeray had been increasingly strained and the latter's decision to stay away may have been deliberate. "For Sena leaders, saheb is the final authority. Dighe had been exceeding his brief, become difficult to control. He was also growing far too powerful in his own right," a Sena leader told Outlook. Dighe had clashed with his mentor in 1998 also, when he had tried to oust Thane municipal commissioner T. Chandrasekhar from his post while the Sena chief backed the latter.

Such was Dighe's clout that he used to hold a parallel "durbar" every evening at his Tembi Naka residence. A bachelor, Dighe ran his court till the early hours of the morning. A senior citizen from the area says: "Dighe was like an alternative government. People came to him with all kinds of disputes and he would dispense instant justice. No one dared to cross him."

Dighe's fearsome hold over the region grew in the 1980s when political life was becoming increasingly criminalised. In 1989, "Dharmaveer", as he was popularly known, was implicated in the brutal murder of fellow Sainik, Sridhar Khopkar, and gained the dubious distinction of being among the first to be arrested under the Terrorist And Disruptive Activities (Prevention) Act, 1987. Khopkar, a corporator, was suspected to have cross-voted in the mayoral elections which led to the Sena candidate's defeat. A month later, Khopkar was hacked to death in broad daylight. Dighe was released on bail and the case is still pending in the tada court. He is also believed to have ordered murderous attacks on several journalists who had dared to criticise him.

Dighe's passing is undoubtedly a huge blow to the party's prospects, especially in view of the fact that municipal elections are slated for February. "Dighe's death has created a vacuum for the party in Thane," acknowledged Sena MP from Thane constituency, Prakash Paranjape. It's still not clear who stands to inherit Dighe's mantle.

Our Man In Louisiana