The Mirror Is Watching 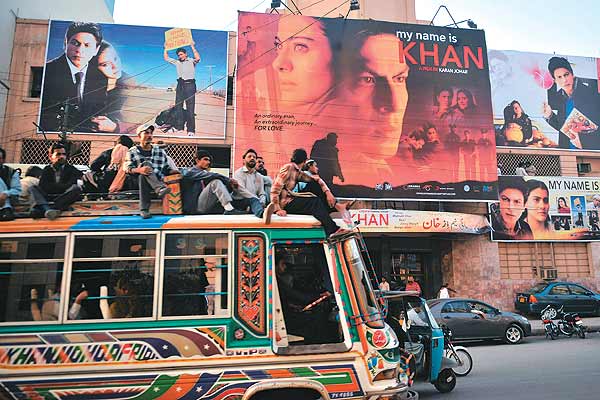 Inside Nishat theatre, one of Karachi’s very oldest, on the first-day-first-show of My Name is Khan, the atmosphere is electric. Ten minutes into the film, as soon as Shahrukh Khan speaks those now-famous lines, “My name is Khan and I am not a terrorist”, the clapping and cheering begins. And it doesn’t stop. Every gesture by Shahrukh’s character, Rizwan, unselfconsciously affirming his Muslim identity on American soil, whether it’s his habit of always saying salaam, rather than the more neutral “hi” or “hello”, praying in public or reciting verses from the Quran identifying Islam as a religion of peace, gets them cheering. The scene where he pelts an Islamic jehadi with stones for misleading the public—an echo of a Haj ritual, in which pilgrims throw stones at the “shaitan”—gets a standing ovation. And when he declares, towards the end of the film, that Khans never go back on their word, applause rings out again. It is pretty safe to conclude there are many here, among them bearded Pathans and veiled women, whose name is Khan!

MNIK, easily the biggest Indian film to release here, has taken the Pakistani engagement with Bollywood to a new level. While the elite may throng the swank Lahore multiplexes for the whole experience of the film, including the Shahrukh-Kajol dream team, and a soundtrack that boasts three Pakistani vocalists, for the masses, a protagonist unapologetic about being a Muslim, and the positive portrayal of Islam as a religion of peace are easily the main attractions. Most Pakistanis have received MNIK as they did the Pakistani-made Khuda Kay Liye—a film that stands up for Muslims when they are being victimised across the world, in the aftermath of 9/11.

Shahrukh has washed away the sins of all films that portrayed Muslims as thugs and dons in Bollywood.

Their approval is registering at the box office. Released here on February 13, the film raked in 13.6 million Pakistani rupees in the opening weekend alone, beating the Hollywood blockbuster Avatar and 3 Idiots. Cinema owners, who feared going out of business until Pervez Musharraf agreed to allow Bollywood films to be released here, could not be more delighted. “There is only one way to describe the response to MNIK in Pakistan,” says Nadeem Mandviwalla, the beaming Nishat Cinema owner, “Unprecedented!” His company, Mandviwalla Entertainment, has bought 25 prints of the film, which are busy making money across the country. (MNIK’s box-office success will not be long-lived however, since cable operators and DVD stores are already putting out pirated copies.)

For most viewers, Shahrukh, whose popularity has soared here after he spoke up in favour of Pakistani cricketers, is the be-all and end-all of the film, and with some, his Pathan ancestry clearly helps. “I would not have expected anything less than this from Shahrukh,” said Sher Afzal Khan, a burly, bearded member of the audience, exactly the sort of man who tends to be socially ostracised in the West, and even at times in Pakistan, for looking like somebody on the FBI’s most wanted list. “Shahrukh toh original Khan hai,” he added.

Mention the fact that Shahrukh’s character in the film marries Mandira (Kajol), a Hindu and one who has clearly not been converted to Islam, something the faith disallows, and he reacts as if he has not heard. With no mention of sindoor, pheras or even a court marriage, the Muslim-Hindu marriage seems to have been dismissed as mere trivia, and has not stopped many from being deeply affected by the tale MNIK spins. “It was such a superb film,” said a middle-aged woman at the theatre, in between sniffs. Since she was veiled from head to toe, one could only see her eyes, and those red, wet eyes said it all.

Taking no chances, however, the Pakistani censor board has used its scissors on the film. Nishat’s management confirms that three scenes were snipped. One showed a caricature of Osama bin Laden falling out of a locker—apparently put there to taunt Sam (Mandira’s son) for having Khan as a surname. Mandira’s emotional outburst after the death of her son, on the price she has paid for marrying a Muslim, has been censored in parts, and finally, there’s a beep in place of the word Islam when Sam’s class teacher talks about Islam being a religion that spreads violence and terrorism. “It’s ironic,” laughs Mandviwalla, “that a film like New York that portrayed a Muslim as a terrorist was passed uncut while this one was snipped here and there. But that is Pakistan for you: completely unpredictable”. But one thing is predictable, nothing elicits more of a response from the Pakistani public than a religious theme, and with this definitive portrayal of the moderate Muslim, Shahrukh has not just washed away the sins of all of those Bollywood films that portrayed Muslims as thugs or underworld dons, but won himself a permanent place in Pakistani hearts. Being an Indian is no impediment.