The SC allows Ajay Jadeja to play domestic cricket. But is time running out on him to get into the national side? Updates 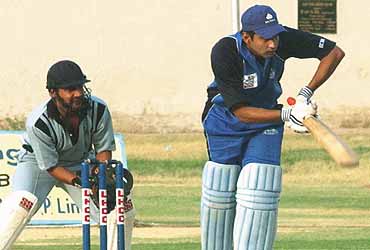 Sunil Gavaskar once said that getting the India cap was no longer as difficult as it used to be. Dead right. With so much cricket being played across the world, and with wear and tear on the rise, newer players, often not of international calibre, get a look-in far more easily than their predecessors ever did. One-season wonders, two-match sensations and their ilk are in plenty.

But if your name is Ajay Jadeja, getting into the Indian team is probably the toughest thing in the world. Tougher than gaining acceptance in the fickle world of films. The cricketer who once looked set to be India's captain, at least in odis, was exiled after being banned from playing cricket for five years. Last week, with the Supreme Court refusing to stay the Delhi High Court's interim order to allow him to play domestic cricket, Jadeja moved one step closer to playing cricket. But representing India still remains a distant dream. While dismissing the bcci's petition for a stay, the Supreme Court said: "He (Jadeja) has been allowed to play only domestic cricket."

Jadeja refuses to comment on the order, saying he does not understand legalese. For the present, he is happy playing for Air Sahara. He scored 45 and a 101 off 78 balls in two appearances on Delhi's local circuit. Obviously, he is pleased with his first taste of competitive cricket in a long, long time: "It's great to be back. I still dream of playing for India again. Cricket remains my first love. I just want to play."

The boyish princeling—from the family which produced Ranjisinhji and Duleepsinhji—was one of the most flamboyant Indian cricketers of the 1990s, both on and off the field. More than 5,000 runs in one-dayers, with six centuries, and a score of 50 or above in every fifth game he batted in. A strike rate of 70 and an average of over 37 per innings. When the match-fixing ban was slapped on all...