The Measure Of Lead 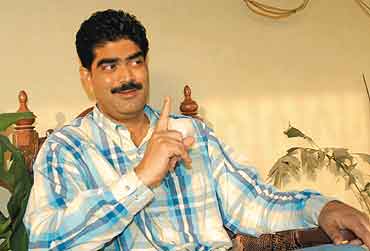 outlookindia.com
-0001-11-30T00:00:00+0553
The easiest electoral contest in Bihar is for a seat where the leading candidate is not even campaigning. Mohammed Shahabuddin—the 36-year-old, three-term MP from Siwan, in jail for murder and kidnapping—probably doesn't need to. Jail, in his case, is Siwan hospital, to which the honourable MP has contributed two wings. Among his history of philanthropic activities, on which the police have a sizeable dossier, he has also built a stadium in Siwan, a girls' college, a town hall and a building for the Red Cross. A medical college and an engineering college are on the make. "He has made Siwan what it is today," says a fawning local journalist. Robin Hood in jeans?

Shahabuddin, or Saheb as his men call him, won in '99, grabbing 55 per cent voteshare. The runner-up, the CPI(ML)—not a few of whose activists have found themselves on the wrong end of a gun in Siwan—got just 36 per cent. Nationally, it's not Saheb's "samaj sewa" but his criminal record that sets him apart. He's the "don of dons" in Bihar. Over six feet tall, fair, muscular, dressed in jeans and checked shirt, a litany of lawless acts sits lightly on his casual filmi hero persona. "I'm not washed in milk. I may have committed crimes in the eyes of the law but I've never committed a crime against God or humanity," says the man, with a sense of drama.

He's also politically savvy. It's a mark of the times that after Laloo Yadav, Shahabuddin is the rjd's biggest vote-catcher. In Bihar's harsh realities, Shahabuddin delivers because he can bend the system, terrify the babus and get the job done. Recently, he issued a 'fatwa' that no doctor in Siwan can charge a fee of over Rs 50 and must set aside a day to treat the poor free.

He's clearly casting himself in the role of a benevolent don. In the hospital, there is a daily darbar when villagers petition Saheb for justice—a job, help in a daughter's marriage. No one in Siwan dares to go against his wishes. Says he: "I laugh when people say fear is the basis of my popularity. Do you really think I can force everyone to vote for me?"

Part of the essence of the man, such as it is, derives from the political machismo he represents for many in the Muslim community. For, in an insecure age of Hindutva and Gujarat, the overt religious symbolism he portrays makes him out as a protector of the community. That is why Laloo landed in Siwan the day he filed his nomination. Says Shahabuddin: "I didn't invite him. But loved ones don't need an invitation. I have told Lalooji I don't need any help."

Shahabuddin, more fluent in English than Laloo, is a PhD in political science. Poll posters call him Dr Mohammed Shahabuddin. "You call me a don. But do I seem crude or uneducated? Who is to sit on judgement?" Since his criminal record began when he barely entered college, his thesis should certainly be worth a read.