The math was a safe haven for black money and hawala operations. Crores were parked here. 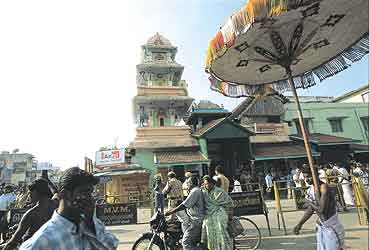 outlookindia.com
-0001-11-30T00:00:00+0553
Is there a time bomb ticking in the Kanchi math which could embarrass many senior politicians and bureaucrats at the national level? According to latest intelligence reports, the math is worth Rs 16,000 crore. "A lot of hawala and black money is stuck in the math cutting across political lines. But the stakes of some bjp and Sangh parivar leaders are the highest," says a source. The Tamil Nadu government has frozen 183 accounts of the math. Of these, 103 are in the Indian Bank branch next to math premises.

Sources say, monies of senior bureaucrats, retired judges and politicians are parked in the 120 trusts run by the math. Among those who have funds are the relatives of a senior national BJP leader. According to police sources, the math accounts are a complex maze and it would take considerable amount of investigation to trace the cash flow. The police team investigating the murder has only looked at the accounts pertaining to the Sankararaman murder case. Points out an investigating officer: "Probing these accounts and all the hawala money routed to the trusts is the business of the enforcement directorate."

Even the limited examining of the accounts has been difficult. K. Premkumar, the superintendent of police, Kanchipuram, told Outlook that it was very difficult to trace the activities of the various accounts in the Indian Bank since bank officials are very close to the math. And former managers of the bank serve the math after retirement. The math even claimed it had no ICICI Bank account. But the SIT has details of the five accounts in ICICI.

When the Supreme Court granted Jayendra Saraswati bail, it pulled up the prosecution for alleging that Jayendra had withdrawn Rs 50 lakh from the sale of a Jal Kalyan Trust property on April 30, to pay the killers. Statements showed the money was deposited on May 7.

According to Premkumar, "The math misled the court." On December 25, N. Sundaresan, the math manager, stated that Rs 50 lakh was deposited in the Loan Against Deposit account. "To the SC, the defence said that Rs 50 lakh was received in cash on April 30 from the sale of a Jan Kalyan Trust property and deposited on May 7 in the Indian Bank. When we verified the accounts, the bank manager stated that Rs 55 lakh was deposited in three different accounts. This was other than the proceeds from the property sale of Rs 50 lakh."

Where did this Rs 55 lakh come from? Says Premkumar, "We don't know. This is a case of cheating the Income Tax department. On the challans for the deposits, there are no signatures of the remitter or the bank manager. This was black money from some other sources." Crucially, these three accounts were hastily closed on May 7.