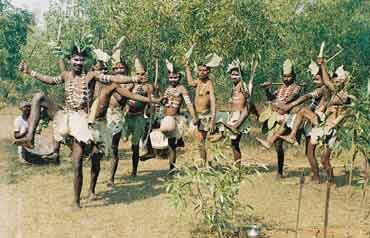 Amarnath Tewary February 03, 2003 00:00 IST The martial dance of the Bhumij still survives in a little outback

outlookindia.com
-0001-11-30T00:00:00+0553
When compared to Kalaripayattu, the much-celebrated martial art form of Kerala, Firkal seems a poor cousin. The art is still practiced but is disappearing fast, now restricted to just the Bhumij tribes of Chhotanagpur area of Jharkhand. Much older than Kalaripayattu and other indigenous martial art forms like that of Manipur and even those of China and Japan, Firkal is still alive thanks a great deal to the efforts of Kalamandir—The Celluloid Chapter Art Foundation (TCCAF), a Jamshedpur-based NGO. For many years now, the organisation has been tirelessly working for the revival and promotion of Firkal.

Today, Firkal survives in just one obscure village, Janumdih, of Potka block in East Singhbhum district of Jharkhand. A group of about 25 Bhumij tribal families here still hang on to the traditions of the discipline. Experts say Firkal is, in fact, a variation of Kirpan Susun (Kirpan means sword and susun dance), a traditional dance form among the Bhumij tribes of Chhotanagpur. The dance portrayals are mostly enactments of hunting scenes and self-defence.

Firkal, even though an endangered tribal art form, has received very little support or encouragement from any quarter. With the number of families performing it dwindling, the art could very well have become extinct by now. Says Amitabh Ghosh of TCCAF: "Unlike other martial art forms in the country, Firkal did not receive any help or patronage. Gradually, with the passage of time, it virtually died for want of resources."

Adds Raghunath Sardar of Veer Adim Kherwar Samiti, a group which works with the tribals in Janumdih: "It’s basically due to poverty, and the degradation of the land and the natural economy that Firkal gradually came to the brink of extinction. Fifteen years back Firkal was practiced almost everyday. Now, even in the only village it survives, we are able to hold performances only five to six times a year."

Like other martial arts, Firkal evolved into a form of recreation among the Bhumij tribes. Over the years there have of course been changes in the movements—but it is in keeping with the ethnic culture of the Bhumijs. The modern form of Firkal reflects the courage and different phases of struggle of the Bhumij who even today survive by hunting and food gathering. "Nowadays, different taals or rhythmic rotations like Bagh taal, Birsa Munda taal and Pahalbani taal are in vogue to denote specific forms of courage and struggle of the Bhumij," says Ghosh.

It was in 1989 during the Adivasi Utsav in Jamshedpur that Kalamandir’s Ghosh first met the Firkal artists from Janumdih. He was so taken in by their performance that he took it on himself to promote and revive the art. With the help of the Veer Adim Kherwar Samiti, Ghosh and other volunteers have been actively trying to promote, preserve the art form. "We are also trying to collect old Firkal songs and codify its rhythms and record the basic body movements," says Ghosh.

Though TCCAF has approached both the Union government as well as the Jharkhand state (which, incidentally, has a tribal chief minister) to help revive Firkal, the response hasn’t been very encouraging. But for an invitation from the Marandi government to perform in Ranchi at a function to mark the second anniversary of the creation of Jharkhand state, precious little was done.

However, help did come from an unexpected quarter. Coming to know about Firkal and its plight, Dr Sanat Mohanty of the University of Minnesota, USA, who is also coordinator of the NGO, Association for Indian Development (AID), contacted Ghosh and and also visited Janumdih village. Later, Dr Mohanty mobilised funds in the US and AID donated Rs 1.21 lakh towards Ghosh’s cause.

To date, this has been the only donation that has come in for saving Firkal. Ghosh needs all the support he can get, both in financial terms as well as in the form of volunteers. To know more about this dying art form, contact: Kalamandir—The Celluloid Chapter Art Foundation, 8-10, N-Road, Bistupur, Jamshedpur- 831001. Ph: 0657-2422648, 2238206. Email: celluloidchapter@hotmail.com.