The Many Masques Of The Playwright 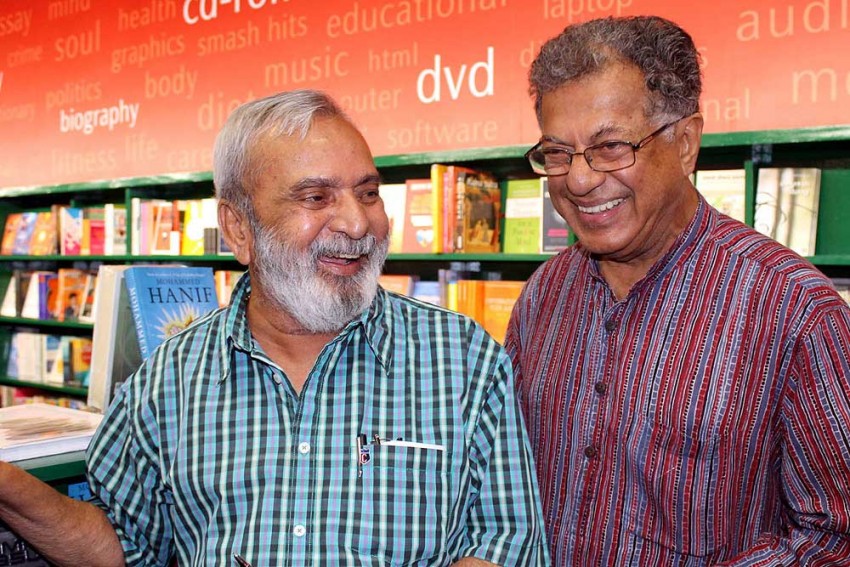 KPN
Sandeep Balakrishna October 20, 2014 00:00 IST The Many Masques Of The Playwright 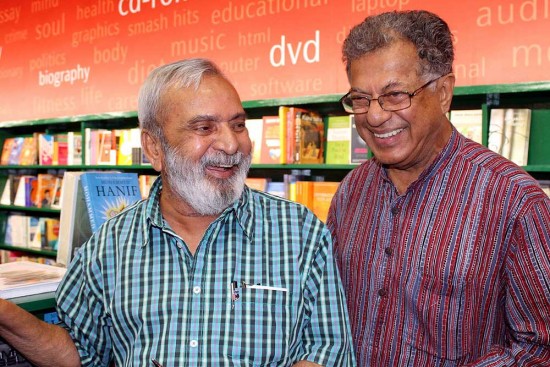 Poor U.R. Ananthamurthy, poorer Girish Karnad. That was the precise, first and only thought that sprang in my mind when my friend, a well-known Kannada writer, phoned to narrate Girish Karnad’s latest feat at the recently concluded Bangalore Literature Festival.

We can begin by briefly exploring an oft-overlooked fact about Karnad’s literary legacy. By all counts, Karnad is primarily a Kannada playwright and writer: all his plays are written in Kannada, as is his autobiography, Aadaadtha Aayushya. He won the Jnanpith for his contribution to Kannada literature. And yet, his fame originated in and spread within India and abroad primarily due to his academic successes in the western world. A Rhodes in your armoury (at least back then) was a formidable magic key that opened several mighty doors that mattered.

This career path pretty much holds true for Ananthamurthy, except for a cardinal difference: upon returning to India, Ana­nthamurthy remained in close touch with his Kannada roots while Karnad identified himself largely with Hindi, Marathi, English and, to an extent, Kannada theatre, and worked quite extensively in the film industry. In the latter half of the 2000s, Karnad metamorphosed into a Bangalore Page 3 celebrity,  whereas Ana­nthamurthy was still active in the Kannada literary circles till his death recently.

This is perhaps one of the major reasons Ananthamurthy’s popularity and influence over contemporary Kannada literature has steadily towered over that of Karnad’s for at least four decades. Additionally, Karnad simply cannot match Ananthamurthy’s grasp over the native Kannada culture, idiom, and some truly original insights.

And now on to the similarities, which are aplenty. For much of  their careers, both subscribed to Marxism—Ananthamurthy high vocal, Karnad subtle. There’s a reason Mark Antony declared that the evil that men do lives after them—Ananthamurthy should shoulder the blame for pioneering the ugly camp culture in the Kannada literary world. His previous generation of litterateurs—Masti, D.R. Bendre, Kuvempu—neither politicised literature nor treated it as a vehicle to reach personal or ideological destinations.

Indeed, both Karnad and Ananthamurthy belong to what I call the Nehruvian generation that failed India’s future. This generation set about desecrating, demonising and erasing India’s ancient civilisational memory and continuity in its quest for attaining the chimera of a new world order.

Which brings us to yet another point of homogeneity between Ananthamurthy and Karnad: S.L. Bhyrappa. Anan­thamurthy led a four-decade-long literary witch-hunt against Bhyrappa, a fact that Bhyrappa has recounted in great detail in his autobiography. Karnad too pitched into witch-hunt sporadically, the most recent being his diatribe against Bhyrappa in 2008 over the historical legacy of Tipu Sultan. While Ananthamurthy remained consistently hostile to Bhyrappa till the end, Karnad took a slightly more nuanced approach. He made two movies based on Bhyrappa’s novels, Vamsha Vruksha and Tab­baliyu Neen­aade Magane. And then, when the Tipu controversy erupted, Karnad claimed he was “ashamed of” and “regretted” making those movies.

And that was a starting point of sorts.

Fast forward to 2012 to the Tata Live! LitFest in Mumbai, where instead of honouring his commitment to speak on his assigned topic ‘Life in Theatre’, Karnad unleashed a wanton onslaught against literary giant V.S. Naipaul in his absence, calling him “tone-deaf” and “unreliable”. If you are a conspiracy theorist, you would conclude that his ire against Naipaul actually stems from his ire against Anantha­murthy. In the first page of Naipaul’s India: A Wounded Civilisation, he speaks glowingly of Ananthamurthy’s Samskara as a “powerful” literary work. No such luck for Karnad.

Karnad was unstoppable. Within ten days, he chose Tagore as his next target, dubbing him a “second-rate playwright”, and the characters in his plays as “really cardboard characters”. Reminds us of the adage about people living in glass houses because a few years ago, another Kannada Jnanpith awardee averred that Karnad’s Kannada plays had to be translated into Kannada.

And now, at this year’s Bangalore Literature Festival, Karnad scored an encore: this time over the fresh memories of Ananthamurthy. Karnad was supposed to pay shraddhanjali (tributes) to Ananthamurthy, and he paid it by characterising Ananthamurthy’s works as “second-rate”, and by labelling his most celebrated work, Samskara, as “very baseless” and “shallow”. And then Karnad got personal: “He (Ananthamurthy) loved a seat but was not given. He pursued a (Rajya Sabha) seat like mad.”

“It is Karnad’s practised duplicity that jars. When URA was alive, not a word did Karnad say against him.”

It is of course nobody’s contention that only positive remarks can or need to be made about the legacy of a writer, living or deceased. However, given Karnad’s record, it is his practised duplicity on the question that jars. In all these long years, and as long as Ana­nthamurthy was alive, Karnad didn’t mutter as much as one negative word about the former’s work. And barely a month after his death, we are treated to this torrent of strident attacks. The duplicity is magnified when we consider the fact that the celluloid adaptation of Ananthamurthy’s Samskara was one of the steps of the success-ladder Karnad clim­bed—he played the protagonist Pranesha­ch­arya. Apparently, Karnad spares none—first it was Bhyrappa’s two novels, and now it is Ananthamurthy’s turn. Needless to say, Karnad “regretted” Samskara as well.

Perhaps the most vital isomorphy between Karnad and Ananthamurthy is their proximity to political power throughout their careers. Ananthamurthy made no secret of his penchant of chasing politicians. From the socialist politician Shantaveri Gopala Gowda to a series of CMs like Ramakrishna Hegde to J.H. Patel to Siddaramaiah, he courted several heavyweights and himself carried considerable influence. But his opposition to the BJP and the Sangh parivar remained steadfast.

Karnad’s politics was differently coloured. Like Ananthamurthy, he was publicly opposed to the BJP and the Sangh parivar and mouthed the right words against “Hindu communalism, fascism” and the rest. Yet, he was not averse to accepting the directorship of the Nehru Centre and the post of minister of culture in the Indian high commission in London under Vajpayee’s “fascist” government. Not too long ago, he called Narendra Modi a “dangerous man”, but in July 2014, he decided to certify that Modi has “provided good governance”. That statement needs to be placed in perspective: Karnad is also part of chief minister Siddaramaiah’s kitchen cabinet. The rew­ards naturally ens­ued: in the recently concluded Mysore Dasara celebrations, Karnad and Siddaramaiah offered the inaugural puja to Goddess Chamundeshwari. What strain of morality whispered in the ears of this declared atheist that it was acceptable to be a guest of honour of sorts at a temple in which idols are worshipped is both a self-evident question and answer.

Karnad’s below-the-belt diatribe against Ananthamurthy shows the abyss he has touched, and by definition, it is bottomless. If Karnad’s call is “not to whitewash” the legacy of writers, and to look at their “darker shades”, why did he need to wait until Ananthamurthy was dead? And why didn’t he apply the same lofty standard to, say Bhyrappa, who he has attacked at will on political, not literary, grounds? And what has been his reaction when his darker shades were exposed in the media and elsewhere? Most people in Karnataka are familiar with his template-like reaction: when subject to critical scrutiny, Karnad has labelled people as BJP-RSS agents, fascists, communal and divisive.

Indeed, such considerations should’t bother us. Karnad has both got what he wanted and gotten away with his anti-Ananthamurthy fulmination: a place back in the spotlight, and public memory is short. Here is a quote to recall when  you hear of the next Karnad-generated outrage: “With more opp­ortunity come more opportunists.” Oh! Also, Karnad’s serial volte-faces and attacks against eminent figures prove that opportunity lies in the midst of difficulty. We now know the exact difficulty that Karnad faces.

(The writer is the author of Tipu Sultan: The Tyrant of Mysore and translator of S.L. Bhyrappa’s Aavarana: The Veil).

The Prophet Of Boom Times