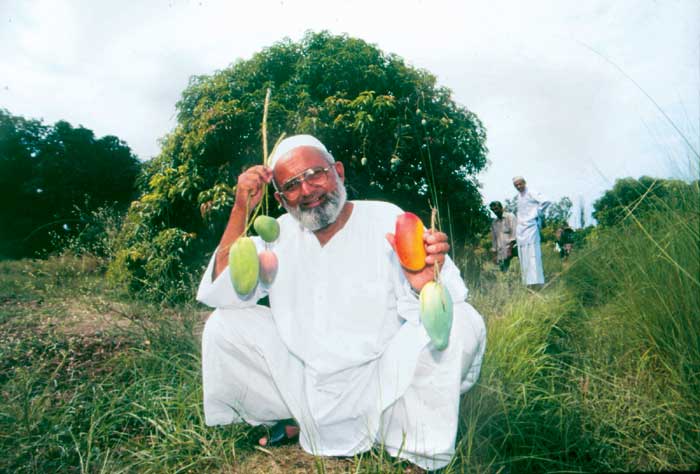 ON Kaleemullah Khan's magic tree—it can bear over 300 varieties of mangoes—every fruit has a tiny tin label of identification on its pale green pedicle. The names are as fascinating as the mangoes themselves: the heart-shaped Asl-ul-Muqarrar, the bright red Husn-e-Ara, the bitter gourd-like Karela, Kelwachampa, Sharbati Bagrain, Pukhraj, Walajah Pasand, Khas-ul-Khas, Makkhan, Shyam Sunder, Prince, Himsagar...they are all there. In all their splendour.

But try pinning a label on the man behind the tree. It's tough. In Malihabad's mango country, where the luscious fruit seems to grow on virtually everything that resembles a tree, 57-year-old Kaleemullah Khan is King. Quite clearly, he is not your average mango-grower. What is he, then? A scientist of sorts? Most certainly. Or horticulture's equivalent of a collage artist? That, too. Or simply a sorcerer whose nature-aided legerdemain defies all explanation? Undoubtedly.

The tree may not be the sum total of his life's work—there's more to the short, stocky, bearded man than a 'freak' achievement—but it certainly is his chosen mission. "I want to live on through this tree after my death," he says matter-of-factly. "It's not a mere tree. It's a full-blown orchard, a veritable laboratory that can be of immense use to researchers."

No wonder the tree has been put together with great care. "I am very finicky about what I put up there," says Kaleemullah. So, the Alphonsos have come all the way from Maharashtra's Ratnagiri district, the Langras from Bihar, the Himsagars from West Bengal and the Bangan-pallis from Andhra Pradesh. He knows all eyes are on the tree. Hence the constant striving for perfection. "I am angootha-thek (illiterate)," he says, "but I do have something to contribute."

The rich crop from Abdullah Nursery, Kaleemullah's 14-acre orchard just off the Malihabad railway station, is packed in wooden boxes every season and sent to all corners of India. A sizeable percentage of his orchard's produce carries Malihabad's famed aroma as far as the Gulf countries. But that, he says, is only his business. Kaleemullah's passion, it is obvious, is the tree that grows in a smaller four-acre nursery across the rail tracks. "It is 75 years old, but it looks as fresh as a 10-year-old plant," says Kaleemullah with the pride of a mother waxing eloquent about the virtues of her favourite child.

Malihabad's star mango-grower has spent the last 10 years of his life painstakingly nurturing the wonder tree, grafting 315 distinct varieties of mangoes on its strong branches. If that were not enough, another tree in the nursery is known to bear upwards of 150 mango types. Not surprisingly, the nursery, about 35 km from Lucknow on the road to Hardoi, has emerged as a major tourist attraction. Every weekend, and sometimes on week -days as well, Kaleemullah receives a stream of visitors—pen-pushers from Lucknow and elsewhere, shutterbugs, government officials, experts and tourists from beyond India's shores. He finds time for everybody. No one is allowed to leave without a 10-kg box of Dussehris. "His hospitality is the stuff of folklore," says fellow mango-grower and cousin Khalilur Rehman Khan. "Last year, he gave away mangoes worth Rs 48,000 absolutely free."

Nature, too, is extremely generous in Malihabad. During the mango season (May to August), up to 150 trucks trundle out of the town every day and head off in different directions carrying nature's bounty. Kaleemullah's own output is sold out in 15 days every year. The result: many prospective buyers, drawn to Malihabad by tales of Kaleemullah's magic touch, have to return disappointed. "If he wants, he can buy mangoes from outside and make a profit on them," says Khalilur. "But he doesn't do that because he is not confident that the mangoes that grow outside his orchard will be quite up to the mark."

Kaleemullah has been in the business for four decades, starting out as a 17-year-old lad in 1957. He dropped out of school after failing to get through Class VII and took up the work that his family's been doing for over 150 years—"since the reign of Wajid Ali Shah". His interest in multiple grafting began early. In 1957 itself, he started with a tree that could give him seven varieties of mangoes. But as he approached break-even point, nature turned nasty. A devastating flood destroyed everything he had planted. "It was so bad that even though we kept pumping out water non-stop, more water would rush in," recalls Kaleemullah. But the elements couldn't stop him. He borrowed money from friends and relatives and set up a new nursery on a higher strip of land.

That is where Kaleemullah works to this day. "By 1987, I had enough in the kitty to be able to turn my attention to bigger things. That's when this tree was born," says Kaleemullah. Within the first three years, over 50 varieties began flowering on the tree.

During the fourth year, as he got more and more ambitious, Kaleemullah grafted 250 mango types on the same tree. With each passing year since then, he has grafted a few additional species.

KALEEMULLAH is a regular at mango festivals all over India and his fame extends well beyond the boundaries of Malihabad. As he shows us around, S.M. Zakir Ali, manager, Delhi Tourism and Transportation Development Corporation, arrives to invite Kaleemullah to New Delhi for the 9th Mango Festival to be held at the Talkatora Indoor Stadium in the second week of July. At the 28th All-India Mango Show, held on the last four days of June at the Kaiserbagh Baradari in Lucknow, there is no doubt who the star is. "Kaleemullah is an amazing man," grants an official of the Uttar Pradesh government's directorate of horticulture and food processing. A local Hindi-language journalist acquiesces: "It's unbelievable. Kaleemullah can grow two or three varieties of mangoes on the same stalk. What's more, he recognises every single variety from the way it looks and smells."

But not all government horticulturists are in awe of him. "Growing multiple varieties on a single tree is no big deal," says S.S. Negi, director of the Central Institute of Sub-Tropical Horticulture located at Rehmankhera, 25 km from Lucknow.

"Horticulturists do it all the time." Moreover, says Negi, only a handful of varieties that are grafted actually flower. But a confident Kaleemullah hurls a challenge at those who doubt his talent. "If my technique is not adopted, even if the entire world's scientists get together, what I've done cannot be replicated," he asserts.

Malihabad's Dussehri output is dropping alarmingly, warns Kaleemullah, because of excessive spraying of pesticides. "It's like poisoning one's own children," he says. "Drastic action is called for." The only way out, he counsels, lies in adopting sustainable means of cultivation and launching an effective war on diseases that harm mangoes. Kaleemullah claims that he knows more about mango diseases than anyone else in India's northern plains. The reason, he points out, is simple: "A single-variety mango tree can be struck by only one disease at a time, whereas on my tree I grapple with tens of diseases at any given time because of the multiplicity of varieties that grow on it."

The government has contributed little to his experiments with mangoes, but Kaleemullah is keen to do his bit to boost India's mango production, which today accounts for 60 per cent of the global output. "Let me work on a government farm," he says. "I do not need a salary, only an expert of my choice. If I fail to deliver, I'll repay every paisa that the government spends on the project." Is anyone listening?

Kaleemullah has declined job offers from Dubai and Abu Dhabi. "I know I can grow mangoes in the desert," he says, "but you cannot buy me with money." He's not interested in a bank balance. Sweetness is all he wants to spread. But will his knowledge survive him? "I've passed it on to my children, but I'm sometimes worried that it might go with me to my grave," he says. Will Malihabad allow one of its greatest legends, the one-tree orchard, to die?

"The King's Constitution Is Different"