The Man Who Has Naveen Pat

Some say it was Naveen's mother, Gyan, who asked Pyarimohan to help; others say he offered it himself. All said, it's been a good partnership. 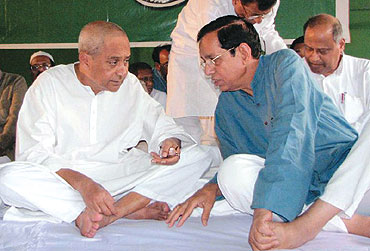 When Naveen Patnaik became CM in 1999, he was more familiar with the international jetset and the world of letters than with Orissa’s villages. Pyarimohan Mohapatra changed all that, transforming a political novice into one of the country’s most successful CMs.

Mohapatra, 69, describes himself as a "Leftist Gandhian by temperament and conviction" in his official profile. A well-regarded IAS officer of the 1963 batch, he caught the eye of the Patnaiks when he became principal secretary to Biju Patnaik during the latter’s second stint as CM. He retired from the IAS in 1998, and Naveen became CM a year later. Some accounts say Naveen’s mother, Gyan Patnaik—who died recently—had asked Pyaribabu to help out; others say he offered his services himself. Whatever the truth, it has been a fruitful collaboration: Naveen has been the face, carrying the legacy of Orissa’s most famous son, and Pyaribabu has worked behind the scenes to make it possible, earning the title of ‘super chief minister’. So whether it has been election strategy, cutting down political rivals to size, key appointments in government or critical government programmes, Pyaribabu’s has been the guiding hand. Most recently, he played a key role in persuading Naveen to end the BJD’s 11-year-long relationship with the BJP.