The Man Who Wasn’t There?

He reinstituted the value of inclusive growth and governance open to scrutiny. He institutionalised the voice of civil society. 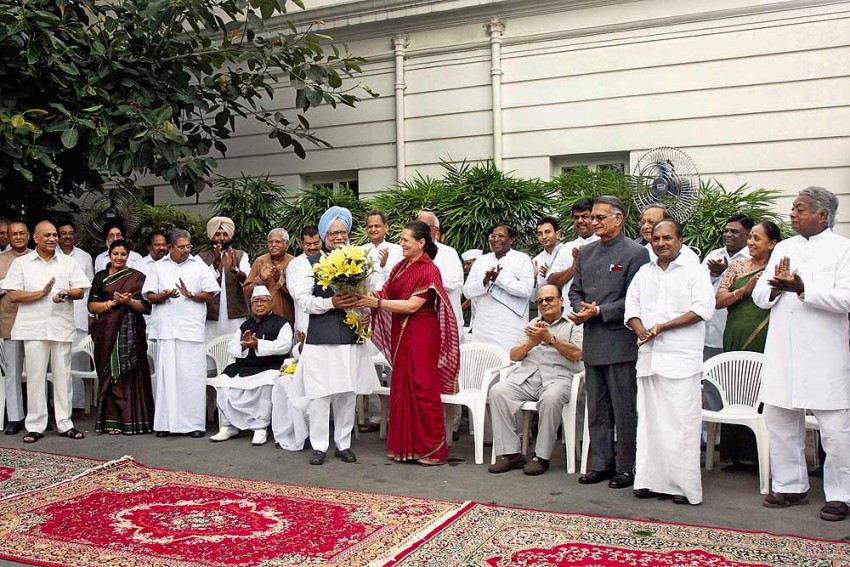 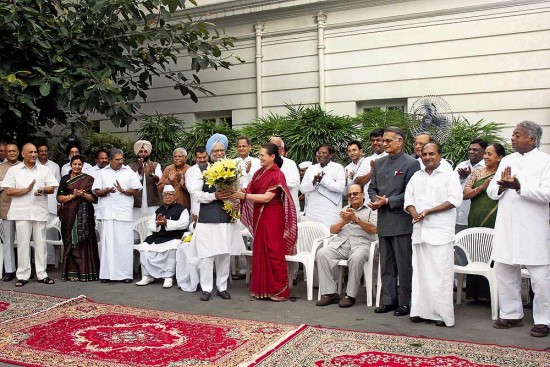 The Manmohan Singh Decade, which technically comes to an end on May 16, can neither be adequately understood nor fairly evaluated without anchoring it in the context of its birth in May 2004. That context was the horrible, horrible violence of Gujarat 2002. And it is no accident that the chief political beneficiary of that violence sho­uld now appear to have come so close to heralding an end to Manmohan Singh’s prime ministerial innings, third longest in the history of our republic.

Let us try to understand that context of the Gujarat violence, and juxtapose it in the larger framework of how India is to be governed—on what terms and on whose terms. The Gujarat violence had contested the terms of coexistence. Fifty years ago, Clifford Geertz, a great cultural anthropologist, had insightfully observed: “Whatever social scientists might desire, there are some social phenomena whose impact is immediate and profound, even decisive, but whose significance cannot be effectively assessed until well after their occurrence; and one of these is surely the eruption of great domestic violence.”

The Gujarat riots of 2002 certainly qualify as an “eruption of great domestic violence”. Had there been no Gujarat riots in 2002, or had that eruption been dealt with more wisely and with greater sensitivity, there would have been no objective conditions for an MMS-type governing arrangement in New Delhi.

The 2004 denouement was scripted in the failure of the NDA government at the Centre, that custodian of our republican virtues and values, to reassure Indian citizens—the majority as well as the minorities—that the ruling dispensation of the day was a fair proposition, that it was not providing comfort and protection to the trident-wielding goons rampaging through Ahmedabad and the villages of north Gujarat. The Centre’s failure was so complete and so abject that the people of India were persuaded to look for new guardians of our constitutional wholesomeness.

Narendra Modi’s apologists can keep denying the severity of the organised massacre of Muslims; they can keep urging us to get real, move on and worry more about growth and jobs; they can keep flaunting this court ruling or that certificate of innocence from the R.K. Raghavans of this world; but, as Geertz had forewarned, the violence has taken its toll unknowingly and unwittingly. More than the violence, the political consecration sought for Modi out of that violence had the potential of redefining our republican covenant. This was a profoundly unsettling phenomenon, a bleeding sore that had to be cauterised. Hence the 2004 verdict, a definite rejection of the men, ideas and calculations behind that violence. Manmohan was a mere historical instrument chosen to carry out the task of clearing the polity of the lingering toxic fumes of Gujarat. 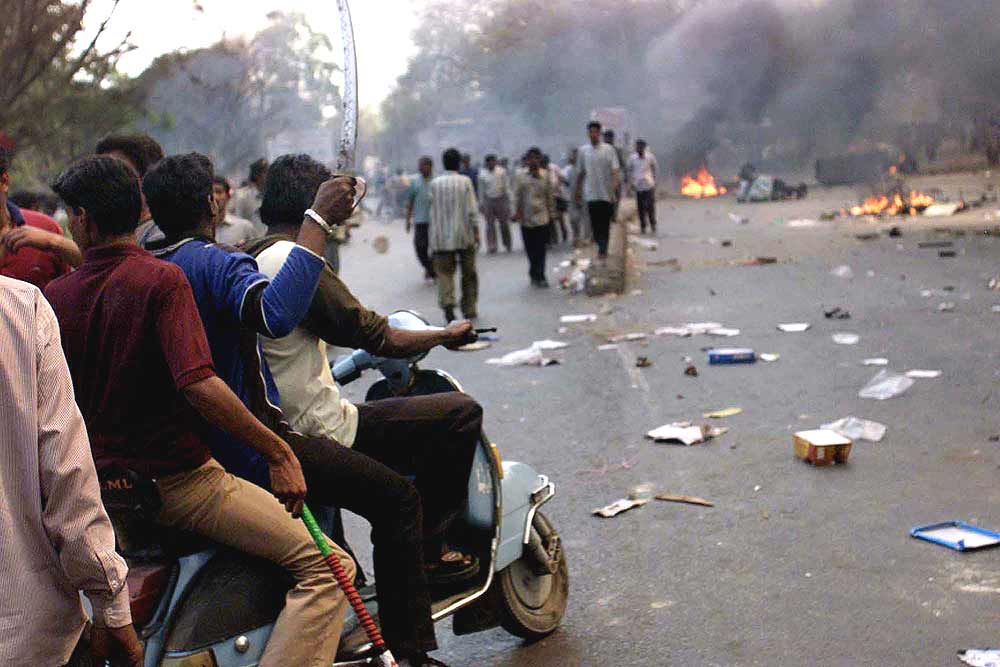 Gujarat 2002 The riots that saw NDA out

Given that context, Manmohan had his task cut out for him as prime minister, and with characteristic diligence and sincerity, his regime went on to make historic course-corrections in three vital areas of national life: social harmony, equity, regional peace. During his term, he never lost sight of the constant need to heal the wounds and pursue reconciliation at home. He brought with him an understated but keen sensitivity. Soon, the political system’s credentials as provider of a level playing field were restored. Social harmony too was restored as a major public objective.

Under Vajpayee-Advani-Fernandes-Modi, India was an agitated, angry and sullen place. We were being daily invited to experience edginess; we were being goaded, much against our wishes, into an undeclared civil war; we were asked to learn a new grammar of resentment, remonstration and retribution. We were enticed to join the choir at the new church of national security.

Social harmony, equity and regional peace are the legacy of the Manmohan regime.

Came Manmohan Singh. Though not a demonstratively religious man, he nevertheless became the first from a minority community to occupy the prime minister’s office. That fact had its own magically calming effect.  And, within a year, the country’s collective nerves had calmed down. Diversity was no longer threatening. Pluralism was not a word of abuse. For the first time in the country’s history, a Sikh officer was made army chief. We had the first woman president in that magnificent villa atop Raisina Hills. Tokenism? Maybe. Yet we felt good. The bad odour of 2002 had been made to evaporate. Secularism was again a codeword for an obligation and a duty to preserve and promote social harmony. No citizen had reason to feel unprotected and unwanted. This was certainly no mean achievement.

Spectacularly unflamboyant, Manm­o­han made no threatening demands on us; he did not call for daily proof of our patriotism; did not insist that we acknowledge periodically that we owed our good national fortune to his stewardship. He left us alone to be ourselves, follow our spirit, each one of us seeking our own salvation; if anything, he rather overwhelmed us with his persona of decency and modesty. Tolerance, openness and moderation became a daily addiction. In a country where rulers make it a habit to be intrusive, wayward and at times downright disagreeable, Manmohan left us to ourselves; we even began missing being kicked around. We began to castigate him as a weak leader.

The second historic course-correction undertaken by Manmohan was a byproduct of the first: a restoration of equity as a key part of our national covenant. Even before he had taken oath as prime minister, Manmohan was asked at a chaotic press conference at his residence on Safdarjung Road what lesson, as a former finance minister, would he draw from the NDA’s comprehensive defeat. His reply was telling: “India must shine for all.” The reference was to the heady sloganeering—‘India Shin­ing’—that had become a substitute for sound and fair governance.

During the Vajpayee days, we were insistently reminded that India was no longer a Third World country and that we had already taken our place at the high table of global capital and finance. Therefore, it did not behoove us to keep talking about the poor and about poverty. We were invited to believe that our collective destiny could improve dramatically only if we let our entrepreneur make his pot of gold and rely on his good sense or on his Hindu piety to share it with the less fortunate. Beyond a point, the Indian state was not morally required to go out of its way to help those who would not help themselves, or those who were not willing to let the market produce its magic. It was Ronald Reaganism at its retarded best—unenlightened, unfeeling and ungenerous. And it did not excite the Indian masses.

In due course, the Manmohan regime produced its own mantra: inclusive growth. This was a fundamentally significant commitment, more so because Manmohan had earned for himself a name as a market fundamentalist, as one who, as finance minister, had moved the Indian economy away from its socialist shibboleths. Now, as prime minister, he was duty-bound to realign the Indian economy with the larger interests of the largest segments among our citizens. The Indian state must care and must appear to be caring for the poor, the disadvantaged, the minorities. The Indian state needed to be there for all. 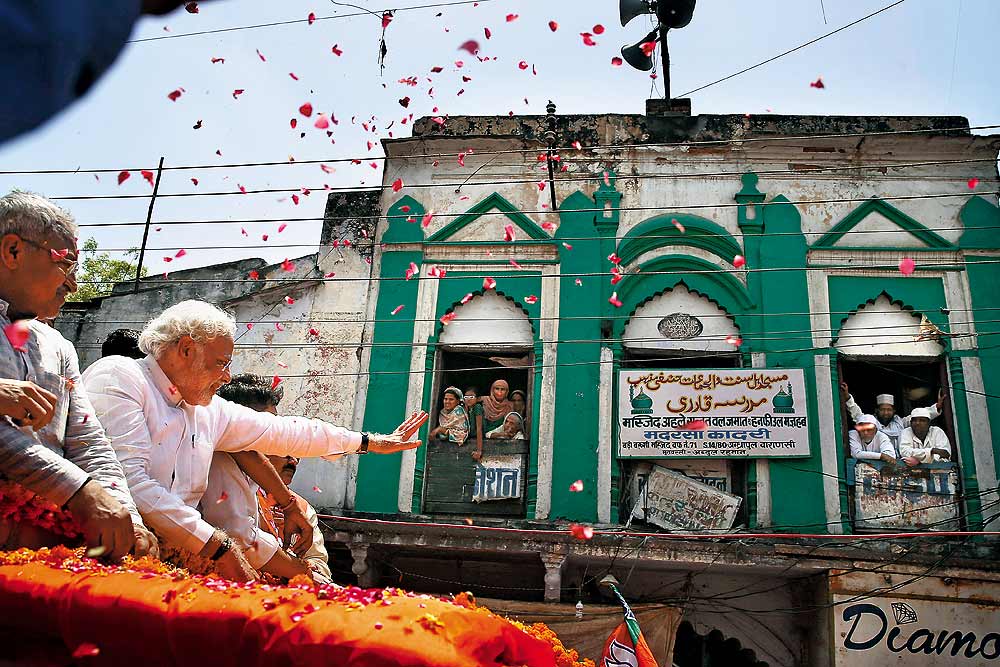 Full Circle: Modi waves as he passes a Muslim neighbourhood in Varanasi

In this endeavour to recoup the popular legitimacy of the Indian state, Manmohan had a good partner in Congress president Sonia Gandhi and her National Advisory Council (NAC). In due course, the NAC became an healthy antidote to bureaucratic unimaginativeness and inertia; it also became a source of policy advocacy of a kind that was not to be approved of by the free market crowd, the chambers of commerce and the financial editors. Still, the terms of the political economy were rejigged in favour of rural India. It was only a matter of time before the counter-offensive began: it came with the insinuation that the NAC had become an “extra-constitutional” decision-making body.

Manmohan was unable to check corruption and take on the crooks. It was a big mistake.

Undistracted by this spiteful criticism, the MMS-NAC partnership produced a slew of progressive legislations and initiatives in policy that have changed the tone of the administration. Governance is no longer a private arrangement between a rapacious political class and a corrupt, corrupting bureaucracy. Also, the partnership of civil society has been institutionalised. It can neither be ignored nor can its voice be muted by the political class or by corporate India. Consequently, the Indian citizen at the end of the Manmohan Singh Decade is an empowered citizen—active, alert, demanding and vigilant partner in the process of governmental functioning. This aroused citizenry is perhaps the second more meaningful legacy of the Manmohan Singh era, and will prove an effective countervailing force against authoritarian temptations.

The third historical course-correction followed from the first two: pursuit of peace in India’s neighborhood. Man­­m­ohan, as prime minister, was clearheaded on one count: India can neither prosper nor remain a peaceful place for long without seeking some kind of reconciliation with our neighbours. This quest for a peaceful neighbourhood was undoubtedly the most hazardous endeavour—for it meant some kind of accommodation and adj­u­stment with neighbours, big and small, and it’s just not part of our national make-up to show generosity to smaller neighbours and to feel confident in dealing with big, great nations. Man­mohan did not have any sparkling success on this count, but consider this: for 10 years, the country hasn’t had a war with any neighbour. It’s one of the longest periods of peace in our recent history.

Against these three republic-renewing legacies, the historian will have reason to feel disappointed that Manmohan waged only a half-hearted battle to make India a country with a robust rule of law. The greatest obstacle came from the rogue businessman, long used to prospering by suborning the rules; the unreformed businessman was not at all averse to using the enlarged democratic space to turn the tables on Manmohan. Just when it appeared that the corporate crooks could end up in Tihar Jail, there emerged that enigmatic phenomenon called the Anna Hazare movement. This mobilisation was essentially a corporate project, and it imaginatively exploited the media and its gullibility to weave a narrative of “corruption”. The drumbeat of insinuation was deafening.

As prime minister, Manmohan was slow and eventually proved unequal to taking on the crooks. This was a costly political mistake. The very rogue elements that were financing and strategising the anti-corruption “movement” are now energetically financing and strategising the “Modi wave”. Crooks not only escaped the dragnet, they became emboldened to sponsor a political assault on his government and party, and the entire architecture of liberal values, ideas and traditions. Yet, as Manmohan leaves that modest bungalow at 7 Race Course Road, he may have reason to be satisfied that ‘Saharashri’ Subrata Roy has had to spend—and indeed  continues to spend—time in Tihar Jail. A wonderful moment in our republic’s life, historians will have to concede.

One Man & His Years

2006: Dares Left to withdraw support from UPA-I on nuclear deal

2014: Declares he would not be available for a third term as PM

The writer, a journalist and scholar, has served as prime minister Manmohan Singh’s media advisor