The Man Who Spins Words In Sulphur 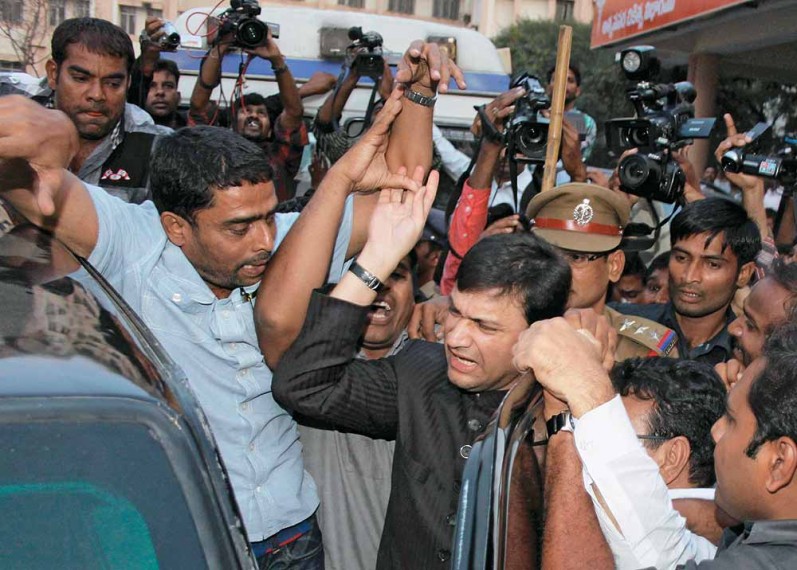 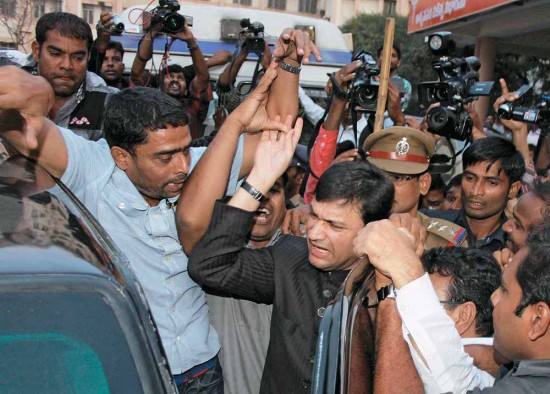 History Lesson
This is not the first time that Akbaruddin Owaisi has had a brush with the law:

WHEN he is not whipping up passions with incendiary speeches, 42-year-old MIM MLA Akbaruddin Owaisi loves to meet up with schoolmates at Hotel Taj Krishna over a cup of tea. He isn’t quite the sort who plonks himself on a bench at an Irani cafe; he dons a sherwani only in assembly or at public meetings. He lives in Hyderabad’s poshest locality, Road No. 12, Banjara Hills, and never grew up in the Old City. He was educated at Hyderabad Public School and did his intermediate at St Mary’s. Most times, Akbarbhai, as he is popularly referred to, is dressed in a pair of jeans and designer T-shirts and looks like a university student. But when he gets rough and dirty, the controversial MLA does it with elan.

His attacks on political opponents in the Dakhini dialect are no-holds-barred attacks that are extremely personal. For example, when the elderly Zahid Ali Khan, editor of the daily Siasat, contested against Asaduddin Owaisi in 2009, Akbar asked of his audience, “Ye nawaab saab ko chalne nahi aata, woh kya ladh payenge hamaare saath?” And the crowd responded with, “Nahin ladh payenge.” After the mim’s attack on Taslima Nasreen at the Hyderabad Press Club, where bouquets were used as weapons, when this correspondent asked him if he regretted it, Akbaruddin replied, “Next time, we’ll do even more.”

The Owaisis have a grouse with the state govt over land for a medical college. Of late, MIM is siding with Jagan.

Akbar is considered the star orator of the MIM, which holds seven assembly seats and has one MP in Asaduddin Owaisi. While Hyderabad has a Muslim population of 41 per cent, the Old City area has a 70 per cent Muslim population. It has always been an MIM bastion. Though a breakaway group called Majlis Bachao Tehreek (MBT), formed by Mohammed Amanullah Khan in 1993, has some presence and Urdu dailies Siasat and Munsif oppose the MIM, the party is considered to be the main voice of poor Muslims in the Old City. It had a tie-up with the tdp in 1999 and subsequently with the Congress in 2004. Its recent break-up with the Kiran Kumar government is said to owe to a clutch of related issues—the Bhagyalakshmi temple, the arrests of MIM mlas near the Charminar on the temple issue and communal incidents in Telangana. Political observers, however, trace the tipping point in the strained ties to when the Owaisis sought land for their Deccan College of Medical Sciences, Dar-Us-Salam Educational Trust, Etemaad daily and Salar-E-Millat Educational Trust. In all, they sought 16 acres in the city valued at `4,000-odd crore. Letters to this effect addressed to the CM were leaked to the media, which reportedly left the Owaisis furious. After snapping ties with him, Asaduddin called Kiran Kumar a Sangh parivar man, a worthy successor to P.V. Narasimha Rao.

Since 1999, when Akbaruddin defeated Amanullah Khan in the assembly polls, his style has remained pretty much the same. Like a rasping vocalist performing at a heavy metal concert, Akbaruddin excites the crowd and gets them going. He first starts with preaching piety (read the Quran etc), philosophy (stay fit, be good to your neighbours), then moves to politics and finally strikes the communal angle. It was the same with his Nirmal and Nizamabad speeches. When asked once to mellow his speeches, he is known to have said, “I am not a fundamentalist, I am a Muslim mentalist.” His father Salahuddin Owaisi (known as Salar) had also been known to give inflammatory speeches. CPI(M) leader P. Madhu says that “communal parties and leaders like Narendra Modi and Akbaruddin simply feed off each other”.

Zafar Javeed, an educationist and secretary of the Pradesh Congress Committee, says Akbaruddin’s arrest was imminent. “I have spoken to a cross-section of Muslims and everyone has condemned what he said. Minority communalism cannot be an answer to majority communalism.” Zahid Ali Khan, a Telugu Desam polituburo member, says the courts should act so that “be it Togadia or Owaisi, nobody should be allowed to indulge in such rhetoric”. He says Muslims in Hindu-dominated areas are now living in fear and secular parties will not touch the MIM now.

However, there are some Hyderabadis who feel Akbaruddin has been the target of a “media lynching” and that the State has gone overboard in pressing against him the charge of waging war against the nation. “This is not the first hate speech and will not be the last. I feel Sec 121 was a bit harsh. The government must use the same yardstick for every such hate speech in that case,” says Mazhar Hussain, executive director of the Confederation of Voluntary Associations, an Old City NGO. Stating that there is a very thin line between justice and vindictiveness, Hussain says the arrest will only increase the persecution complex among Muslims and paint Akbaruddin as a victim.

Anwar Maozzam, a retired professor of Osmania University’s department of Islamic studies, says Akbaruddin’s “communal divide speech” is against the constitutional framework. “But when Praveen Togadia visited Hyderabad and said he’d create another Ayodhya here, why wasn’t a single statement made to condemn him? Why was he not arrested?” he asks.

Akbaruddin’s schoolmates see him in a different light altogether. They point out he married a Christian (Sabina) in 1995 and for three years was estranged from his father over the inter-community marriage. The couple has a daughter and son. Friends say Akbaruddin is quite secular in private. “He runs two schools in Amberpet and Dilsukhnagar and encourages children to go for mainstream rather than madrassa education,” says Umesh Juluri, a former classmate.

Currently in judicial custody, Akbaruddin, wearing the undertrial tag No. 7546, is seeking bail on medical grounds. Attacked in April 2011 by MBT supporters, he still has a bullet lodged near his sciatic nerve and scars from many stab wounds. He had sustained injuries to his intestines, spine, kidneys and makes frequent trips abroad for treatment. Incidentally, in the Nirmal speech, Akbaruddin boasts that after the attack, his injured kidney has been functioning even better.

Asaduddin exudes confidence that his brother will be exonerated by the courts. If the Nizamabad speech was inflammatory, he says, why was permission given for the Nirmal meeting, which happened later? “At a time when there is a huge debate on gender equality, what about communal equality?” he asks. He cites inflammatory statements from BJP and Sangh parivar leaders and wonders why they weren’t arrested.

Meanwhile, Telangana Rashtra Samiti (TRS) leaders say that MIM is seeking to spark communal strife in Nirmal, Nizamabad, Tandur and Karimnagar to scuttle the Telangana issue. “They are doing this with the connivance of Jaganmohan Reddy’s YSR Congress,” some of its leaders allege. Asaduddin attributes it to the TRS’s frustration. For MIM supporters, meanwhile, Akbaruddin has become a hero twice over—once for surviving the attack in 2011, and now again, when he is being “serially victimised by the State”, as Umaiz Muqtar, a youth from the Old City area of Hyderabad, puts it.

‘His Inclusiveness Is A Powerful Myth’