"The Man Who Runs Infosys" 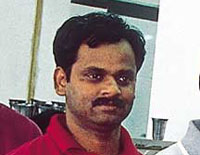 A.G. Panduranga / Secretary
If N.R. Narayana Murthy is iconic, his secretary A.G. Panduranga, or "Pandu", as he is known to all and sundry, is a legend in his own right to Infosys watchers. A short, dark, post-office-clerkish-looking man, he has been managing Murthy’s life for 15 years now. Intensely loyal to Infosys, efficient beyond belief and possessed of a memory that would make a super-computer weep, Pandu was once described by CEO Nilekani to a journalist as "the man who actually runs Infosys". To prove his point, Nilekani called Pandu to his room. "I’ll be in New York on May 18 for a meeting," he said. "Can Murthy join me there?" Please note this conversation was taking place in February. "On May 18, Murthy will be in Chennai for a cii function," said Pandu. "What about July 11?" persisted Nilekani. "I am in New York again. Can he join me there?" "On July 11," said Pandu, "Murthy will be in LA, attending his daughter’s convocation." "See what I told you?" Nilekani said triumphantly to the visitor. "Pandu runs Infosys."

Today, work pressure has forced Pandu to himself hire two secretaries but his legend grows by the day. Like the story that the CEO of a new software start-up has built his office to replicate Murthy’s to the last detail, and even hired a Pandu look-alike as his secretary. As for Murthy, when he found that his wife and children had already seen Titanic, he bought two tickets and took Pandu with him to see the movie.