The Man Who Could Be King

To avoid another proxy CM going rogue, Sasikala’s nephew T.T.V Dinakaran has been given the reins 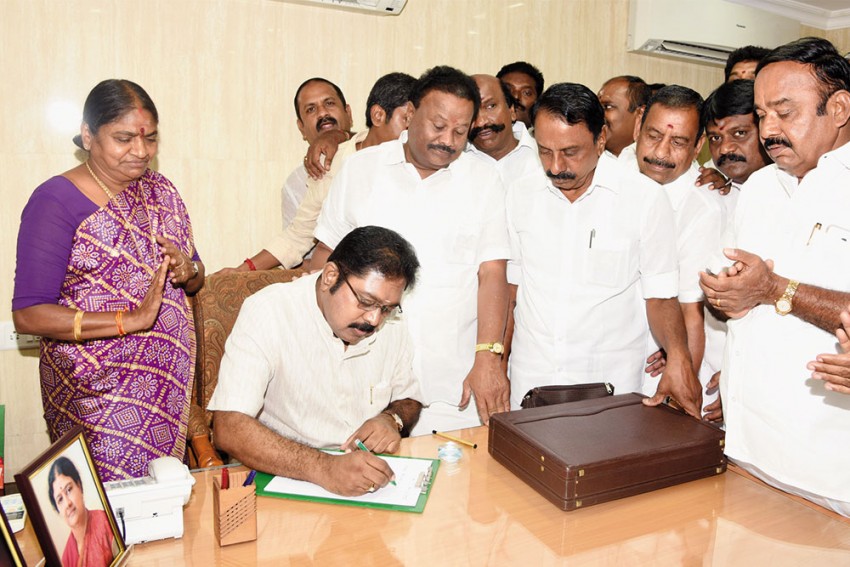 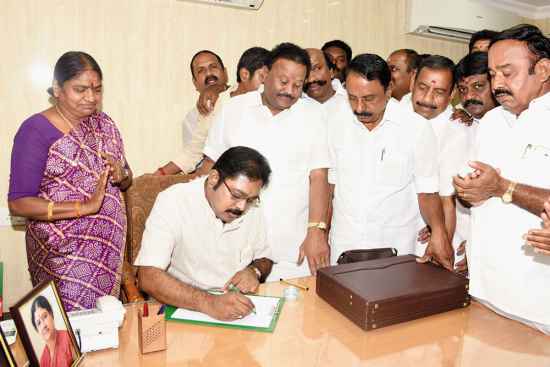 Some say he’s the son Sasikala never had. Perhaps, he could even be what Sasikala could not be—the CM of Tamil Nadu. T.T.V. Dinakaran reali­ses­ these two eventualities rather well. He wears them lightly, with an air of cool, like his half collared kurta.

Dinakaran’s closeness to Sasikala ensures that he can encash his right to the CM’s throne when the time comes. After all, it was on his suggestion that O. Panneerselvam came to be proxy CM when Jayalalitha got unseated in 2001. OPS proved to be such a self-effacing substitute that Jayalalitha plumped for him again in 2014, when she and Sasik­ala went to jail in the DA case.

Meanwhile, Dinakaran had grasped that OPS had become his own man. So when Jayalalitha got hospitalised last year, he suggested the name of Edappadi K. Palanisami to handle her portfolios. But that did not happen as OPS, due to his prior experience, took over as CM.

According to observers, Dinakaran (52) refused to remain a silent spectator when OPS took over again as CM after Jayalalitha’s death. He is said to have convinced his “Chitthi” (mother’s younger sister) to take charge, lest OPS, the proxy, turned permanent. “What Dinakaran failed to anticipate was the revolt of OPS. That a man who called him ‘Dinakaran Sir’ would push away the very ladder that brought him to this height, stunned him no end. Such total betrayal was unexpected,” says Andipatti MLA Thanga Tamilselvan.

But this is where Dinakaran’s ability to network and make friends came in handy. Even as the MLAs in the Koovathur beach resort became anxious when the Supreme Court verdict went against Sasikala, it was Dinakaran who convinced them that things would eventually work out in their favour. “When the SC order came, almost everyone went into shock. Only Dinakaran rem­ained calm and broke the silence with ‘what next’?” recalled a senior minister.

By then, Dinakaran had already firmed up Palanisami to take charge and even promised the doubters that he would not do an ‘OPS’ to the family. His presence at the swearing-in and at Jayalalitha’s memorial, rubbing shoulders with the new CM, showed the world the arrival of the “CM monitor.” The state, the party and the administration learnt that the new CM would have a permanent ‘guide’ as the ‘family’ cannot risk another proxy going rogue.

“Do not overlook the fact that Dinakaran kept his distance during the confidence vote in the assembly and when Palanisami took office as CM. It is not in his nature to be overbearing or pushy,” points out V.P. Kalairajan, a senior district secretary of the party. “Also, he never misleads anyone with false promises. He is unlike the normal politician. Actually, he is a very decent person.” When Kalairajan had threatened, for the sake of drama, to chop off the arm of OPS if he even touched the party headquarters, the first person to chide him was Dinakaran. “That is no way to speak of a chief minister, even if he is just a caretaker CM,” Dinakaran had told him bluntly.

Dinakaran also adv­ised Palanisami to take office in the CM chamber, something OPS had eschewed during his tenure, saying he did not want to occupy Amma’s room. “He does not believe in false sentimentalities. If the party has to move on after Jayalalitha, it has to. ‘Preserve her memory but not the trappings’ was his cryptic advice,” says a Mad­urai-based observer who has known Dinakaran since he entered active politics. 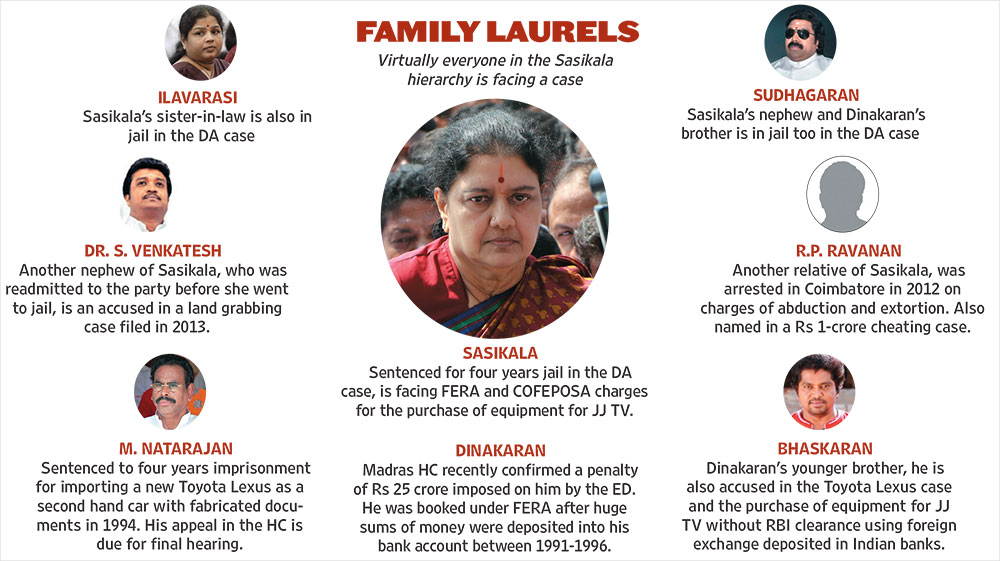 Many in the AIADMK were surprised when Jayalalitha fielded Dinakaran to fight the 1999 Lok Sabha elections from the Periyakulam constituency, from the safe Thevar belt, which he went on to win easily. “She had just disowned Sudhagaran, the youngest brother of Dinakaran, after having adopted him as her foster son and marrying him off in extravagant style. And here she was taking a risk with another member from the same family. But Amma wanted a confidant in Delhi and he fitted the bill, though he was just 34,” says a former MP.

Unlike his two brothers, Dinakaran was more educated, having gradua­ted in engineering before he went into real estate. He easily befriended people, spoke passable English and followed Jayalalitha’s orders without any digression. When he lost the 2004 Lok Sabha election, Jayalalitha immediately sent him to Rajya Sabha. “Those 11 years in Delhi were a learning experience for the young man. He gained the confidence to emerge as a future leader,” observed an AIADMK MP.

In her absence, Sasikala has saddled Dinakaran with the task of running a ­government without overtly app­earing to.

But the shortcuts the Sasikala fam­ily had adopted in the past tripped him. His widely-reported acquisition of three hotels in London turned out to be an embarrassment for Jayalalitha. But that charge, initially tagged with the DA case, never got prosecuted after it was unh­itched from the main case. When he was fined Rs 25 crore in a FERA case, he claimed to be an NRI, only to be exposed before the HC that he had just contested a Lok Sabha poll as an Indian citizen.

Soon the slide began. He lost his treasurer post to OPS, the man he had lifted to the limelight, who later went on to become the number two in the government. Dinakaran had receded into the background but he kept in touch with friends in the party. Though Jayalalitha axed Sasikala and her relatives in 2011, and took back only Sasikala later, Dinakaran’s wife Anuradha continued to run Jaya TV. “Sasikala could not bring him back to the party during then, but he was allowed to enter Poes Garden to meet his aunt. On a few occasions, Jayalalithaa even chatted with him,” disclosed an INS­ider from Poes Garden.

Even now, Dinakaran continues to hold forth from Poes Garden, a hallowed ground for AIADMK cadres. By making him deputy general secretary, Sasikala has saddled him with the task of running a government without overtly app­earing to and safeguarding Jayalalitha’s vote bank amidst an anti-Sasikala mood.

Towards achieving the latter agenda, Dinakaran asked Palanisami to take the tested Amma path by rolling out some of the welfare schemes she had ann­ounced but could not implement. So schemes such as subsidised two wheelers for working women, increased cash assistance for pregnant mothers and closing down of more liquor shops, were rolled out on his first day at office, in the hope that these pro-women measures would tone down the anger against Sasikala.

“Dinakaran may be a smart political manager but can he lead the AIADMK to electoral victories? At least one assembly by-election and local body elections are due. He needs to improve his oratorical skills as he is likely to be the face of the party,” says a one-time legal adviser to the AIADMK. “One reason Sasikala wanted to take over as CM was to end the dual leadership in the party. But the same arrangement continues even now. If the party fares poorly in the elections, the demand for “T.T.V. for CM” can get louder. That change over could trigger another crisis within the ruling party.”