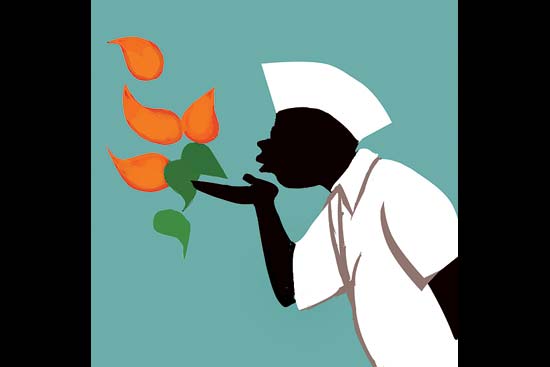 Less than 24 hours before Air Force One was to touch down at Palam, there was an SMS: Sushma Swaraj would address an election rally in the evening at Malkaganj Chowk, not far from my neighbourhood. I wondered whether the foreign minister of India should not be boning up for American President Barack Obama’s visit next day rather than sweating it out in Sabzi Mandi’s bylanes. Curious, I ambled over to the venue. It was a classic nukkad meeting. Poorly lit stage; poor crowd, 200-odd people; she had already arrived. After local candidate Rajni Abbi belted out her number, the foreign minister took over. She rather went through the motion of selling her party. Though she talked about the prime minister’s various schemes, neither the crowd nor she seemed particularly enthused. Not once in her 20-minute speech did she mention Narendra Modi by name.

Another day, another speech. A day after Delhi had voted, RSS chief Mohan Bhagwat was addressing a gathering in Ghaziabad, the city that gave the BJP the second-highest victory margin in the May 2014 Lok Sabha election. According to a report in a local Hindi paper, the RSS boss, in his 50-minute speech, did not even once mention Narendra Modi by name.

The common omission bookends the story of how the Leader and his Generalfeldmarschall lost Delhi. The RSS bosses will resume their poker game with the Modi sarkar. The Modi-Bhagwat equation will remain unsettled, to the PM’s disadvantage. The BJP CMs are the most relieved lot. They hope the very unpleasant Amit Shah will stop breathing down their necks. The cabinet, too, will be a little less suffocating a club. Every senior cabinet minister is privately savouring the rebuff in Delhi.

The BJP had needlessly converted the capital battle into a referendum on Modi’s politics and his prime ministerial leadership. Despite the staggeringly one-sided verdict, it was an election lost by the BJP as much as won by the AAP.

The 2014 Lok Sabha success had expectedly bred arrogance and amorality. More than the panicky choice of Kiran Bedi as chief ministerial mascot, it was Krishna Tirath’s induction that revealed the new power elite’s cultivated indifference to ethical considerations. A minister in the UPA government, she was a finished product of the corrupt Congress culture, and by no stretch of the imagination an advertisement for the ‘change’ Modi had grandiloquently promised. Yet the Modi-Shah duo brazenly flung her in the Delhi electorate’s face. The decision reeked of unadulterated cynicism: the voters will swallow whatever rhetorical gruel Modi would dish out.

It was this same mindset that saw the party brass going out of its way to use all the central government’s coercive arm to show up AAP as involved in unappetising practices. In contrast, Kejriwal and AAP came across as wanting to reintroduce idealism and ‘values’ in Indian public life. They were at least seen as enthusing its cadres with a sense of nobility.

To be fair, the Modi-Shah team was honing the same tactics and strategies that had produced handsome wins in other electoral arenas. Throughout the LS campaign, Modi was coarse and crude, yet our public intellectuals serenaded him for his musc­ular prose and bold body language; his megalomania was explained away as a wonderful ‘will to power’. In Delhi, Modi was being himself. The cru­deness sudd­enly stared in our collective face because in Delhi there was no ‘dyna­sty’ for Modi to demonise. Unlike in Maharashtra or Haryana, there was no incumbent reg­ime he could rave and rant against. Against Kejriwal, the same familiar tactics of aggression and name-calling looked ‘negative’ and overkill.

The other side of the massive AAP vote is it denied the Modi-Shah team its most potent instrument. In 2014, the BJP had mastered the art of religious mobilisation. The LS victory was anchored in a strategy of communal polarisation. Team Kejriwal was acutely aware of the communal antics. It adroitly avoided the Shahi Imam trap.

The Delhi vote has underlined the ephemeral nature of the 2014 mandate. By the time Delhi went to polls, the Modi Spell was petering out and the citizen had seen through the bogus sincerity. These last eight months as PM, he has failed to make us feel nobler; if anything, the absence of political aesthetic is so loud and jarring.

The national ‘mood’ may still be inclined to believe in Modi and his potential but the democratic temper of the Indian polity has reasserted itself. This democratic temper—which first manifested itself so magnificently in 1977—does not countenance insolent rulers. By giving him a close haircut, the Delhi voter has reaffirmed the obvious: Gujarat cannot be replicated in Delhi.

(The senior journalist has just published How Modi Won It.)