The Magic Club of Six

Sehwag is an excellent player once he gets going, and it is important for him to get going in the next couple of games if India are to restore some lost pride. 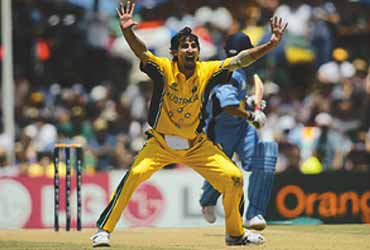 outlookindia.com
-0001-11-30T00:00:00+0553
The big news last week would have to be South Africa's loss to New Zealand. What's ailing the host team, who I feel are still the second best side in this tournament? Well, luck has not been on their side, and if rain had not intervened, they might have been able to beat New Zealand. There is also a problem with the bowlers—Allan Donald seems woefully out of form, and even the rest of the attack lacks the wicket-taking ability that is so important if a team has to do well. Perhaps the pressures of being the host team, and the media hype that has surrounded their campaign, are also getting to them.

But what is most surprising are the comments emanating from the South African camp. I am surprised that players are still talking about how they felt about Hansie Cronje. Comparing Shaun Pollock to Hansie is not going to help anybody. Pollock is the captain right now, and that is the reality. Talking about times gone by, and captains past and present, is not going to help them get into the Super Six. But focus on the games at hand certainly will. Herschelle Gibbs' comments lamenting the absence of Hansie, and Gary Kirsten telling him to get on with the game, are thoroughly disruptive. They do not reflect very well on the state of affairs within the South African camp. These are times of strife, and everyone in the squad must support each other rather than pondering on what is not there and what might have been.

South Africa must regroup quickly, because if they manage to sneak into the Super Six, they still have a very good chance to redeem themselves. They must take heart from Australia's example in 1999, when we lost the first couple of games before getting back on track.

There have been no teething problems whatsoever for Australia this time round. They are clearly the best side on show, with an impressive win against Pakistan and a whopping one against India. Glenn McGrath had said that the team would be looking to retain the Cup without losing a single game, and on current form, I must say, they look capable of doing that. Shane Warne's departure seems to have brought the team together, and the captain and coach have shown exemplary leadership qualities during the entire episode.

The big plus in Australia's favour is the fact that their bowling line-up boasts of three of the best fast bowlers in the world—McGrath, Jason Gillespie and Brett Lee. They are all wicket-takers and between them they never let the pressure on the opposition ease off. I don't see them having any trouble going through to the semi-finals. After that it's a bit of a sudden death situation, and upsets can happen.

India won their game at Harare to keep their hopes afloat, and while fans back home are very upset, all is not lost for Saurav Ganguly's team yet. India played reasonably well to beat Zimbabwe, but I'm not wholly convinced that their batsmen have regained form. Sachin Tendulkar is batting well, and that is always a good sign for India. They just need another couple of batsmen to start firing. That did not happen against Zimbabwe. Virender Sehwag is an excellent player once he gets going, and it is important for him to get going in the next couple of games if India are to restore some lost pride.

India's problems are still in the head, and once they regain some confidence, everything else will fall in place. The think-tank has decided to stick with their seven-batsmen strategy, and I have no problems with that. In the absence of a quality all-rounder, you have to go either with seven batsmen or with five bowlers, and right now the former remains the better option. They can get away with Tendulkar, Ganguly and Sehwag taking care of ten overs between them. For such a gameplan to work, it's important that the four bowlers in the side do their job well.India may not have the most fearsome attack in the business, but they are a capable bunch. At this level, it is making the most of what you possess, rather than over-experimenting, that helps a team most.

Both India and Pakistan play England next week, and then take on each other. The two games against England will give us an insight into the goings-on in the England camp. I'm not sure what frame of mind they are in right now, after they were denied any points from their Zimbabwe game. Nasser Hussain had bitterly stated that he would not want to go on as captain after this tournament. If we are to take such utterances seriously, then his decision could either result in an inspirational effort or a distracted approach. The England team looks better than it did in Australia, with the availability of Michael Vaughan, Andrew Flintoff and Craig White. On paper they look capable of beating Pakistan and India, so the games at Newlands and Durban will be very interesting. Right now, there are two spots up for grabs, and three teams fighting for them. India need to improve their batting further, and Pakistan remain a blow-hot-blow-cold team. Australia, of course, have already booked a place in the Super Six.

Looking across to the other group, Stephen Fleming and Ricky Ponting look like the best captains in the tournament. I would also add that Sri Lanka is looking the second best side in the tournament. They were exceptional against New Zealand, and since then have blown away the lesser teams who have come in their way. South Africa will have to beat them if they want to keep their hopes alive. The rained-off game between West Indies and Bangladesh was a big result for South Africa, and that might be the slice of luck that will get them through. I have a hunch that the hosts will creep into the Super Six, and if they do that, they could still be a dangerous contender for the Cup. On current form, however, Australia is the team that looks light years ahead. (Gameplan)