The Luchi Speaks For Itself

Scholarship with memoir and recipes. Occasionally she speaks where silence would have been eloquent. But nostalgia never tasted so good. 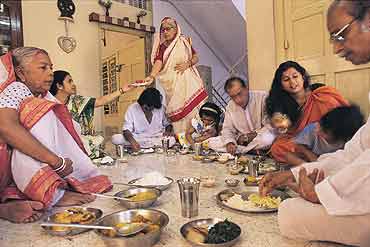 The Hour Of The Goddess: Memories Of Women, Food And Ritual In Bengal
By Chitrita Banerji
Penguin Pages: 160; Rs 195
Gazing upon Christmas-emptied streets from an American window, Chitrita Banerji would often long for the ebullience and feasts of Durga Puja. It started off something that became a passion. Like divining the ingredients in a salad dressing, she began probing the origins of Bengali food and its permeation of all aspects of life: ritual and folklore, religion, family.

Banerji’s Life and Food in Bengal was followed in 2001 by The Hour of the Goddess. This book—now in paperback—adopts a similar model, combining scholarship with memoir and recipes. The circumstances of Banerji’s life have uniquely qualified her to write on Bengali food, in which cooking styles hinge upon the provenance of the cook. East Bengal or West, Muslim or Hindu? Banerji, born in Calcutta, in a devout West Bengali Vaishnav family, married a Bangladeshi Muslim and lived in Dhaka. Just as there’s no ‘Indian food’, she says, there’s no ‘Bengali food’ either, so great are regional and other differences in cooking styles. To truly understand and enjoy food, you have to abandon prejudice.

Banerji’s references to the formidable food historian K.T. Achaya and to numerous others demonstrate her spadework. But she wears her scholarship lightly, her prose warm, intimate, vivid. She takes flight describing mundane activities. "The (grinding) stone and Patoler Ma pitted themselves against each other every morning...," she says of a stick-thin family servant, even as a luchi is "set afloat (in oil) like a paper-boat".

Writing of this servant and her mother’s widowhood, she reveals how much food can oppress while it sustains. Occasionally she speaks where silence would have been eloquent: as another great gourmet, Sheila Dhar, said, "You ought to let the vegetables speak for themselves". That said, nostalgia never tasted so good.

The Other Gujral Doctrine