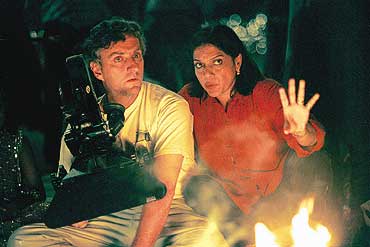 But, just a minute—there's also a stirring of darker matters under the orders for Black Label scotch and lethal nuptial fare. Also, virtually on the eve of the mehndi and sangeet, the bride hairs off into a rainstorm with nasty Other Guy. These are only two of no less than five separate stories that Nair and scriptwriter Sabrina Dhawan have woven together without ever confusing us with abundance of character, or diminishing our interest in any one strand. Here, in fact, is one of the most successful features of the film. It is a seamless tapestry, all the more fascinating because, like handicraft, it is authentic.

Authenticity is the prime characteristic of two other elements in the film, the casting and the performances. "Ensemble" is a word much bandied about in the context of filmic playing these days, but here is an example both good and true. Naseeruddin Shah gives a finely observed and moving portrayal of the familiar, mixed-up, hilarious Lalit Verma, archetype of all Punjabi fathers marrying off a well-loved daughter. Lillette Dubey is his entirely credible, sexy, bustling spouse. Tilotama Shome and Vijay Raaz play out a touching counterpoint of the film's main boy-girl tale. Vasundhara Das is the girl at the heart of the matter and Shefali Shetty is the unmarried cousin with a smothered, troubling memory.