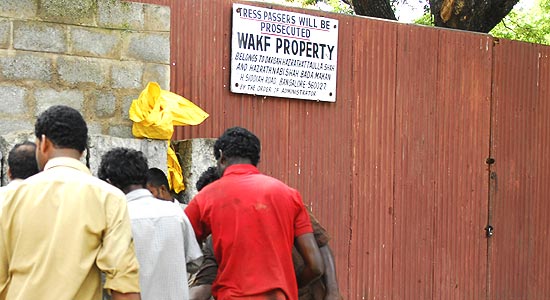 Change is afoot in the laws governing the wakf. The issue of the boards selling off Muslim community resources (Outlook cover story, Allah’s Left The Building, Sept 21) has now been taken up at the highest levels by the UPA government. Sources in the PMO say Dr Manmohan Singh has personally taken note of the issue.

Union minority affairs minister Salman Khurshid promised on TV that he’ll bring in amendments to the existing wakf laws in the next session of Parliament. He was talking on an episode of the Karan Thapar show India Tonight on CNBC-TV 18 that focused on Outlook’s story. The minister agreed the situation in the wakf boards is worrying and that something needs to be done.

Advocate and standing counsel of Jamia Millia Islamia university Atyab Siddiqui has dashed off a letter to the prime minister on the “irregularities in management of the wakf boards (re: Outlook magazine, dated 21.9.2009)” requesting the setting up of a high-powered committee to suggest reforms in wakf laws and an inquiry into all the numerous properties “transferred” by various state boards. Siddiqui says “the plunder by the wakf boards is worse than the plunder by Mahmud of Ghazni”. About 3,00,000 wakf properties on about 4,00,000 acres of land are registered with wakf boards across the country.

Siddiqui is also filing a pil this week with the Supreme Court on behalf of a group, the Society for Education, which seeks to uphold civic rights and fights for the preservation of monuments and our heritage. The pil will seek the following:

Meanwhile, the Urdu press has also begun a debate. Several Urdu newspapers and journals have translated or quoted from Outlook’s story. Nai Duniya, a magazine edited by ex-MP Shahid Siddiqui, translated and published the story. The country’s most widely circulated Urdu paper, Rashtriya Sahara, carried articles that quote from the story.

“The plunder by the wakf boards is worse than the plunder at the hands of Mahmud of Ghazni.”
—Atyab Siddiqui, Advocate, Jamia Millia

The Muslim community has responded in a very emotional manner to the story. Outlook was contacted by individuals from across the country keen to highlight further cases of corruption and encroachment. We got a letter accompanied with documents from Mohammad Akhlakh of Chandigarh. It states: “The Chandigarh administration has sent the name of one Khalil Ahmed for membership of the wakf board. The said Khalil Ahmed is an encroacher of Chandigarh wakf board property and the board even filed a civil suit against him. The said property is worth crores and in case Khalil Ahmed becomes a member of the Chandigarh wakf board one can imagine the fate of the civil suit.”

We can merely investigate and highlight the story. The ball is now in the government court and, equally, the Muslim community to reform the wakf and build institutions on this valuable resource. Hopefully the process has begun.