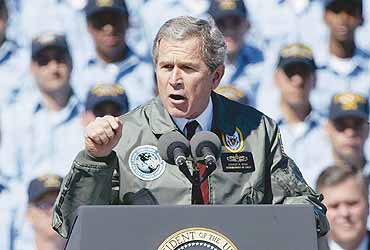 outlookindia.com
-0001-11-30T00:00:00+0553
On the eve of yet another crucial meeting on Iraq last Friday (March 7), a blanket of unusually heavy snow on the United Nations Plaza did not deter some diplomats from coming outside to nervously pull at their cigarettes. Such was indeed the anxiety over the deep fissures that threatened to wreck the UN Security Council (UNSC) as a mechanism to ensure world peace. Still seething from the fact that Europe's largest powers, France and Germany, along with permanent members Russia and China, had hardened their anti-war stance, American and British diplomats worked overtime to avoid an embarrassing confrontation at the UNSC. Their confidence had been tempered by the growing realisation that the current draft resolution—which effectively sanctions war—does not have the necessary nine votes and is threatened by a veto or two.

Britain consequently offered an amended draft resolution that could be more acceptable to the UNSC members. Advocating a middle ground, it suggested setting a short deadline (of days or even hours) for Iraqi President Saddam Hussein to fully comply with demands that he give up all weapons of mass destruction (WMD), or else face war. But the deadline, some countered, needed to provide a realistic, not cosmetic, time-frame for Iraq.

The amended resolution could be put to vote in the middle of the week beginning March 10. Diplomats called the deadlock over Iraq "a death-knell" for the UNSC as it has existed since its inception. The New York Times thought "the worst of all possible outcomes" had arrived, that it would "sever the few remaining restraints that have kept the Bush administration from going to war with its motley ad hoc coalition of allies".

But if the French were accused of being intransigent, US President George W. Bush's pre-emptive speech on the eve of March 7 also demonstrated his resolve to go to war with or without the approval of the UNSC. If the US foresees a defeat for the vote on the second resolution, it could well abandon it altogether—and still wage war on Iraq. Some, though, described Bush's speech as pressure tactics: convince non-permanent members about the inefficacy of casting a 'No' vote, win their support and muster the requisite number for the resolution.

Washington's foreign policy establishment is reeling from shock after one of the worst weeks of US diplomacy. On March 5, French, German and Russian leaders shared champagne and smoked salmon hors d'oeuvres in Paris, after cocking a snook at Washington and declaring that none of them would support a resolution sanctioning war. Tight-lipped China quickly echoed its support, leaving Washington's key strategy of isolating France in tatters. "America has always been perceived as the big bully, but things have changed after the Cold War," a Washington-based diplomat told Outlook. "The Franco-German bloc is too large a force to ignore and, with Russia and China, is pioneering a new alliance in what has essentially been a world of one superpower." It could have been even worse for Washington had it not won the support of Spain, which risked the wrath of its people and its EU partners to support war on Iraq.

The poorer non-permanent UNSC members were stunned to be thrust into the limelight. But they tried to exploit it to their advantage. Bulgaria, for instance, has driven a hard bargain, risking EU membership (due in 2007) to support the US and UK. Its rewards include a repayment of outstanding debts worth $1 billion, a role in Iraqi reconstruction and security guarantees in the face of military or terrorist threats. Americans are already joking about replacing French wine with Bulgarian, and that Bush finds it impossible to pronounce the name of his new strategic partner, Bulgarian premier Simeon Saxe-Coburg Gotha."It's the battle of the pipsqueak powers," joked columnist Maureen Dowd. "We dragoon Bulgaria to offset France dragooning Cameroon."

US diplomats have been desperately wooing the "minnows", the Pentagon's disparaging term for the inconsequential countries with a consequential vote. There have been promises of guns and oil and lucrative contracts to rebuild their fragile economies. And threats as well. "The amount of pressure being put on these countries is tremendous, unheard of," Ivo H. Daalder, senior fellow at the Brookings Institute in Washington, told Outlook.

Even so, the fence-sitters stayed firmly on their perch. Pakistan, Chile, Guinea, Mexico, Cameroon and Angola were put in the difficult position of having to choose between friends and potential economic ruin if they alienated Uncle Sam. Pakistan, which won special kudos from Bush in helping nab Al Qaeda kingpin, Khalid Sheikh Mohammed, was rewarded with the writing off of $1 billion worth of bilateral debt, massive aid, and with the US turning a blind eye to its nuclear bomb programme. Munir Akram, Pakistan's ambassador to the UN, has hinted it will go with the flow, waiting till the last minute to back the winning side or abstain.

Both Chile and Mexico depend so heavily on the US for trade that it is inconceivable for them to vote against the US, despite strong domestic anti-war pressure. Angola and Guinea also count on the US for aid and military training and have privately admitted they will back the US. Yet nobody can be sure about their votes until they are cast. Cameroon could swing either way. Syria, the only Arab state in the UNSC, will vote against the resolution—its relations with Baghdad have recently improved after an oil pipeline was constructed between the two countries.

UN diplomats are apprehensive of the deep fissures within the UNSC. Says a western diplomat, "While everyone is busy focusing on Iraq, it seems obvious that the entire international community will be adversely affected if the UNSC loses its influence as a unifying force to maintain peace." The problem will be compounded were the US to go to war without UNSC approval. Andrew Kuchins of the Carnegie Endowment for International Peace, Washington, told Outlook, "This (the US going ahead without the UNSC approval) is a serious test of the international security system. The repercussions will be considerable but not necessarily irreparable, especially if the war follows the best-case scenario of a short conflict and the US executes a more successful diplomacy for reconstruction."

Britain's amended resolution may win the pro-war camp some votes. But it is likely that it is too late to paper over the deep cracks. "No country, not even the US, can afford to go to war alone," says a French diplomat. The Washington hawks think otherwise, indifferent to the consequent illegitimacy of its authority.

A Time For Action