The Marathas love their mutton—spicy, soft and rich 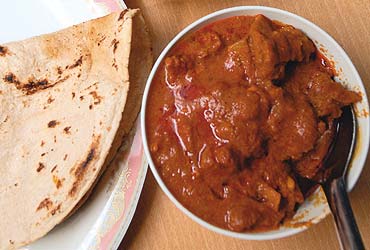 Kolhapuri mutton conjures up images of blood-red curry with an inch-thick layer of oil sloshing at the top; the sort of fare that needs to be consumed with a bucketful of water at hand to douse those flaming taste-buds. But the modern day mutton tambada rasa—known outside this southern Maharashtra district simply as Kolhapuri mutton—is nowhere near as infernal as it once was. Full-flavoured, yes, but call-out-the-fire-engines hot? Definitely not.

In truth, the torch-your-tongue variety was probably more in favour among Kolhapur's Maratha rulers, whose lineage goes back to Shivaji. In the days when Kolhapur was a princely state, its nobility liked nothing better than to come home to a dish of rich, fiery mutton after a hard day's shikar.

The Marathas love their meat. "Eating vegetables is like not eating at all," says Rajlaxmi, wife of Digvijay Khanvilkar, Maharashtra's former health minister. "There's no point calling anyone home if you're...