The Line In A New State

In KCR land, a new moniker is gaining mileage. No surprises who it is. It’s his son KTR. 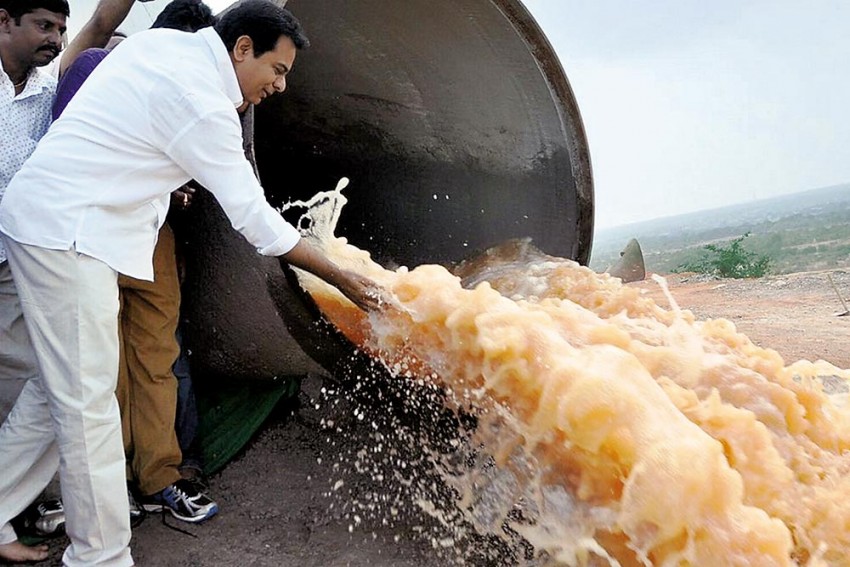 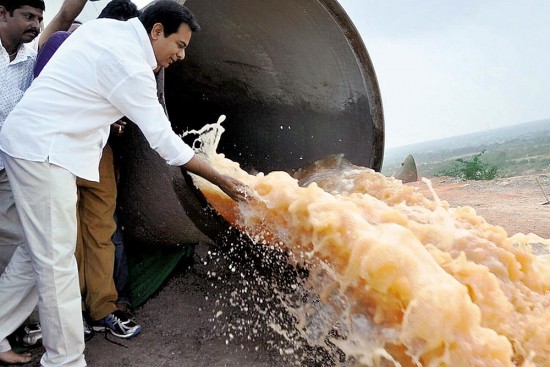 It has been 18 months since the formation of Telangana and the expec­ted rise of K. Chandrasekhara Rao’s Telangana Rashtra Samiti (TRS) to power. The story, since then, has been one of the steady rise of KCR’s son, Kalvakuntla Taraka Rama Rao. The 39-year-old son of the chief minister is ubiquitous—be it on life-sized hoardings across Hyderabad or receiving foreign dignitaries such as Mauritius President Bibi Ameenah Firdaus Gurib or inaugurating a drinking water pipeline in Karimnagar under Mission Bhagiratha.

The US-educated KTR was the toast of the IT and P3 circuit. Inaugurating a marathon on one day and charming women entre­preneurs at an FICCI meet the next, KTR is moulding a new image—from man of the classes to leader of the masses.

While some senior ministers have been sulking in private, it is obvious that the rec­­lusive KCR is projecting his son as the next CM. Recently, when KTR laid a foundation stone for two-BHK houses for the poor in Hyderabad, Con­­gress leader Mohammed Shabbir Ali said it was a violation of protocol. “KTR is being highlighted as a de facto CM. Why was he given preference over Union Lab­our Minister Bandaru Datt­a­treya, Deputy CM Mahmood Ali and home minister Nay­ani Narasimha Reddy? KTR holds neither the urban dev­e­­­lopment nor housing or mun­icipal administration por­­tfolios. In what capacity is he laying foundation stones?” he asks.

While the opposition Congress speaks out, senior ministers in the KCR cabinet have been chafing at having their portfolios reviewed by a junior KTR. During the elections, the TRS manifesto had an initiative named Mana Ooru, Mana Pranalika. It was a scheme meant for all-round improvement of villages through better service delivery. The same scheme, now renamed Grama Jyothi, falls under KTR’s portfolio as panchayat raj minister. So while seeking funds for roads, water, electricity or even housing for the poor, all ministers have to report to KTR.

If there was talk earlier about a three-cornered contest for power among KTR, his sister and Niz­amabad MP Kavitha and cou­sin T. Harish Rao (minister for irrigation & legislative affairs), KCR made his choice evident in the Warangal bypolls last month. KTR took the lead in the campaign and the party cadre were reporting to him.

Though the popular Harish has vast political experience, KTR is building his image on similar, broader lines. Ragha­vendra Reddy, a poll analyst and public image building expert, says that the exercise to propel KTR to the forefront is natural. “How­ever, while KTR needs a KCR to win an election, KCR still requires Harish Rao to lay the groundwork for winning elections. But, like all over India, sons take precedence.”

The images of elderly women touching the feet of KTR or those of defectors from TDP and Congress being greeted by him at the secretariat convey a message. “While KCR busies himself with the run-up to a Chandi Yagam this month, KTR is not just handling TRS affairs but government policies as well,” says a retired bureaucrat.

When criticised about luring leaders from other parties to the TRS in a run-up to the Greater Hyderabad Municipal Corporation elections, KTR shot back, “Where was Congress leader Jana Reddy before joining the Congress and which party was Chandrababu Naidu in before joining the Telugu Desam?”

Elections to the GHMC will be held in January and the TRS has high hopes for the civic polls. Greater Hyderabad was considered to be a sticky wicket for TRS, given its large number of Andhra voters; the party is trying to counter that by inducting Kamma caste (dominant in  Andhra) leaders and cadre from other parties. Unsurprisingly, KTR has been ent­rusted with the GHMC poll task.

During the inauguration of the prestigious T-Hub—an ecosystem for start-ups and IT entrepreneurs—it wasn’t KCR, but KTR who shared centrestage with Tata Sons chairman emeritus Ratan Tata. Said to be the country’s largest technology incubator, the T-Hub photo-op with Ratan Tata garnered KTR a national spotlight.

When quizzed recently if he is being groomed as a future CM, KTR ret­orted, “Why should I deny or comment on something which others speculate upon? Let them believe what they want to believe.”

More politicians and Telangana obser­vers believe they are watching a process of anointment.