The Laws Are Mutable 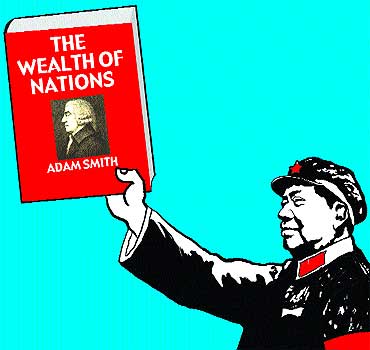 outlookindia.com
-0001-11-30T00:00:00+0553
There seems to be slowly an opinion emerging that this global economic recession is based on something deeper than the housing crisis of 2008 in the United States, even though that may have been its proximate cause. There are commentators beginning to wonder if this is not a sign of some systemic flaw in capitalism, and even maybe an early rumbling of the end of capitalism that Marx had foretold a century and a half ago.

These speculations are, however, not well informed. Our economic life depends on a multitude of forecasts that individuals make and the thousands of contracts and agreements they get into concerning the future—give me a loan now and I will pay you back over the next 30 years, for instance. Since no one knows exactly how the future will unfold, there is no way of guaranteeing that these contracts, which often lean on one another, will not come tumbling down like a house of cards. Such occurrences are not special to capitalism.

Capitalism has enough flaws of its own. It is a ruthless and mean system that shows no mercy towards the needy and the weak, and not much, for that matter, towards those without rich parents. But that is a topic for another time.

It is good to think about fundamental causes, but I am not in a position to comment on the genesis of this crisis. What intrigues me here is a fact about the Chinese economy. It is now standard wisdom that China began to grow rapidly from 1978, after the initiation of Deng's pro-market reforms. If one studies China's growth data, it becomes evident that, while average annual growth did pick up a little after 1978, that is not the main difference between pre- and post-1978.

Even before 1978, during the deep Communist period of Mao, China had had stretches of remarkable growth. During 1964-66 and 1969-71, it grew at over 16 per cent per annum. What was special to the period of deep Communism was the occurrence of recessions. In 1961, China's output declined by 27 per cent; there was another deep recession in the mid-1960s. In contrast, during the period of market-oriented policies, there were no downturns. No other nation in the world has seen the kind of sustained growth that China has achieved over the last three decades.

In the case of China, it is the pro-market period that is associated with the lack of recessions and the deep-Communist period with an abundance of them. But China's economic experience poses many more puzzles than most economists are willing to admit. The gospel according to conservative economists is that it is free-market policies that have given China its record-breaking growth. The truth is very different.

The amount that the Chinese government intervenes in the market is way above almost any other economy. Take the proportion of national output that is produced by state-owned firms. For Thailand, this is 5 per cent, South Korea just over 10 per cent, India just below 15 per cent. For China, the figure is close to 50 per cent. In China, farmers still do not own their land and firms have party members who keep a watch on the decisions of managers.

If the Chinese economy had failed, conservative economists would tell you that it could not have been otherwise. Therefore, the fact that China has succeeded creates a conundrum. No matter what we make of it, with 30 years of steady growth, China has also become a bulwark for the global economy. Everybody is looking to China for support in this season of global gloom.

It is interesting that India, with a very different system from that of China, is also beginning to take on some of the mantle of steadiness. Its growth of 7 per cent in the financial year that ends this month may be painful for India (since it was growing in recent years at 9 per cent) but is a source of some envy for most other nations.

There will be difficult choices India will have to make in the coming months as the global recession deepens and maybe even turns into a full-fledged depression. Unfortunately, there are no immutable laws of economics that we can easily rely on the way an engineer repairing an automobile can use a manual. What we need to do is to keep an eye on history, learn from experience—ours, China's and other nations', and stay away from dogma.