The Lathi Blows That Moved Delhi

Where crackdowns are as common as the azadi chant, what is different about police action at NIT Srinagar? 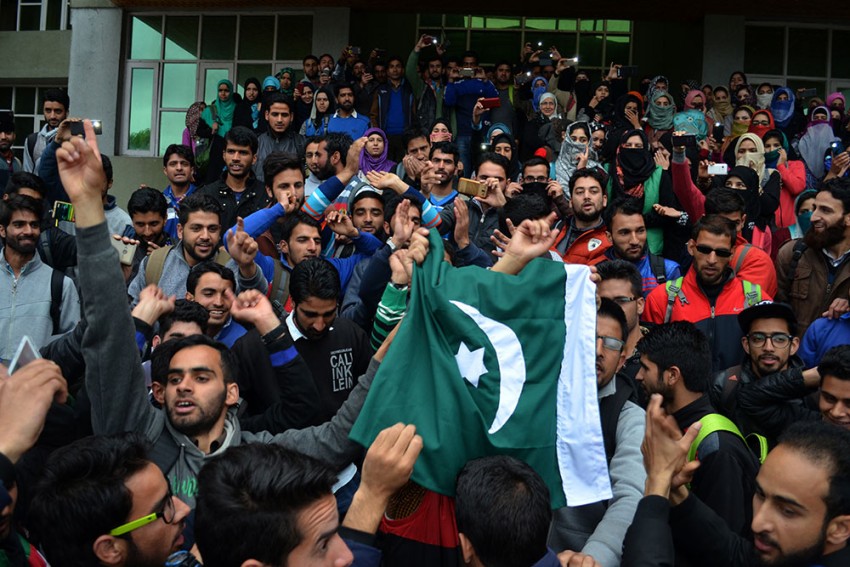 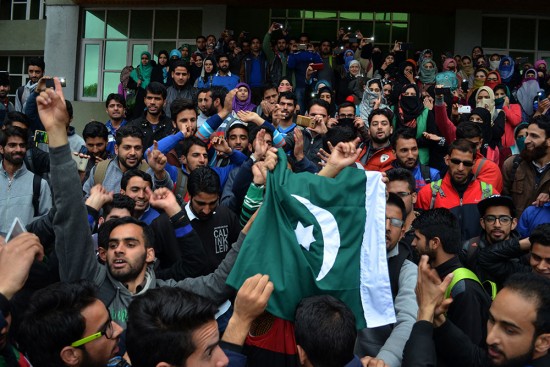 1983: Kashmiris cheer for the legendary Viv Richards and his teammates during the one-day India-West Indies cricket match in Srinagar. As India loses the match, the young spectators hold celebrations and jeer at the team led by Sunil Gavaskar. Cricketers from the Caribbean, meanwhile, can’t figure out what’s happening.

2016: West Indies beats India in the T20 World Cup semis in Mumbai, and many Kashmiris, including students at the National Institute of Technology (NIT), Srinagar, rejoice. But unlike the 1983 incident, the celebrations and the ensuing clashes between Kashmiri and non-Kashmiri students resonate across the country.

If you don’t live in Kashmir, chances are you would be surprised when your hear Kashmiris cheer for Pakistan. Those who have lived in the Valley, though, know how routine this is. This is nothing new, thanks to 68 years and counting of the Kashmir “dispute”. Feelings ran so high even in 1984—before pro-azadi militants declared “armed struggle” against India—that when Germany drew first blood in the Olympic hockey finals against Pakistan in Los Angeles, a middle-aged man died of cardiac arrest in downtown Srinagar. (Pakistan went on to win.) Two years later, when Javed Miandad hit that famous last-ball six off Chetan Sharma at Sharjah, the celebrations in Kashmir went on for days.

To put the NIT episode in context, take the stark contrast between its reception and that accorded in mainstream Indian media to the protests and security crackdown that ensued after the alleged molesta­tion of a local girl by a soldier in Handwara, in which lives were lost, as is routine in such episodes. The muted interest in the ‘mainland’ was equally routine, despite it coming close on the heels of the hue and cry over police action in NIT. And what happened there was decidedly more minor in scale.

On March 31 evening, some among the few hundred Kashmiris in the 2,700-strong student community at NIT Srinagar were doing what had been done ever so often in Kashmir—celebrating India’s loss—when the other students on campus took offence and took out protest demonstrations. Vid­eos show them chanting slogans like ‘Bha­rat mata ki jai’, ‘Hindustan zindabad’ and ‘Pakistan murdabad’ as they went on a rampage vandalising college infrastructure, while the Kashmiris raised anti-India and pro-Pakistan slogans. Come morning, the non-Kashmiri students took out a march. A Kashmiri boy working with a courier company was asked to chant ‘Bharat mata ki jai’ and beaten up when he refused. Local pol­ice rushed to the campus and thrashed the non-Kashmiri protesters, injuring some of them. “Before the cops arrived, the Kash­miri students bore the brunt of the violence as they are heavily outnumbered by the non-locals,” an NIT staffer tells Outlook .

In the streets of Srinagar and elsewhere in the Valley, the only sporting event that matches a Pakistani win in sheer capacity to cause exhilaration is an Indian defeat. Perhaps the reason why a Srinagar-based marketing and admission head for a top Chandigarh college, for instance, advises his bosses to treat Kashmiri students like “you would treat NRIs or Pakistanis”. The advice seems to have worked; the college has seen no trouble so far, though hundreds of Kashmiri students join it every year and throw parties whenever Pakistan wins or India loses a cricket match. 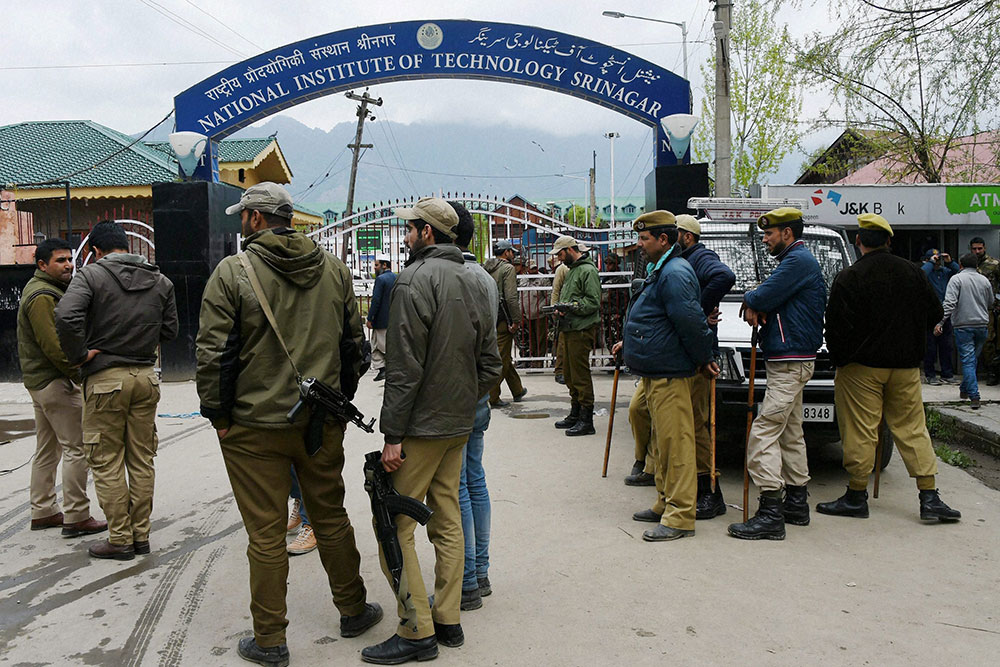 “Minor clashes happen on any campus. Something that started over a cricket match shouldn’t have been politicised like this. There have been many tense situati­ons in Kashmir—say, the mass agitations of 2008 and 2010—but they never affected the cordial relations bet­ween local and non-local students at NIT.”  So, why was it that this time an institute in the Valley that admits students from all over India made news not as a symbol of “unity in diversity” but as another reminder of the deep faultlines between Kashmir and the ‘mainland’?

Some say this is symptomatic of the glit­ches in the marriage of inconvenience bet­ween the ruling PDP and the BJP. Fingers point almost unanimously at “some elements” in the BJP in New Delhi for “making a mountain out of a molehill”, to put Mehbooba Mufti’s government in a tight spot. That adds another motive to what otherwise dovetails pretty well into the larger pattern of events in universities and other educational institutions across the country—of the Sangh parivar asserting control and seeking maximum Hindutva leverage in the content and pro­cess of education and research.

Faced with protests by stude­nts and teachers of Hyderabad Central University and JNU since the death of Ambedkar Student Associat­ion activist Rohith Vemula, the HRD ministry made an exception in the case of NIT, the only place where it sent an official team to investigate. “Why only here?” asks Noor Ahmad Baba, who teaches political science at the Central University of Kashmir. “The Centre has never sent any team to universities and institutions where Kas­h­mi­ris face harassment on a regular basis. The ministry’s decision to rush a team to NIT only deepened the distrust between Kashmiris and the regime in New Delhi.”

Some Kashmiri academics see a direct hand of the RSS in the way events unfolded at NIT. “It was a conspiracy. From where did they get that huge tricolour, that too with a long pole? The RSS planned it all,” says Hameeda Nayeem, who heads Kashmir University’s English department. “To celebrate the defeat of your oppressor is a legitimate and non-violent form of resistance. This is nothing new in Kashmir. My sources tell me that a non-Kashmiri teacher instigated the non-Kashmiri students.”

“To celebrate your oppressor’s defeat is a legitimate form of non-violent resistance,” says Hameeda Nayeem of Kashmir University.

Quoting sources, The Telegraph rep­orts that HRD ministry officials Sanjeev Sha­rma and Fazal Mahmood, who visited NIT, have submitted an interim rep­ort and could partly blame the non-Kashmiri students for the trouble. Indeed, the timing of the incident—coming less than a week after Mehbooba Mufti became CM, breaking a three-month deadlock over government formation following her father and former CM Mufti Moha­mmed Sayeed’s death—only fanned suspicions. Mehbooba too raised questions over what prompted HRD minister Smriti Irani to send the probe team to NIT and has hinted there is more to the incident than meets the eye. In her first meeting with her ministerial collea­gues from the BJP, she stressed on the need to “underplay some unfortunate and uncalled for” incidents like NIT. “Ultimately, we have to run a coalition government in the state,” she says. “And Kashmir is not just ano­ther Indian state. The ground realities are different and, therefore, the state des­erves special attention and care.”

The NIT incident has come in handy for those who argue that “development” is no answer to the Kashmir “dispute”. It has also highlighted the dangers of turning a blind eye to Kashmir’s fraught relationship with the government of India while introducing the kind of changes that are being imposed by the current regime across institutions in the rest of the country. After all, at the root of the crisis in NIT is the huge gap of perceptions bet­ween students who believe Kashmir to be an “integral part of India” and those who have grown up rejecting the idea. As Kashmiri satirist, poet and activist Zareef Ahmad Zareef puts it, “The non-local students shouldn’t be blamed for what happened at NIT. Told since they were kids that Kashmir is India’s atoot ang (inalienable part), they just can’t take it when they see the rage and hatred of Kashmiris against their country.” 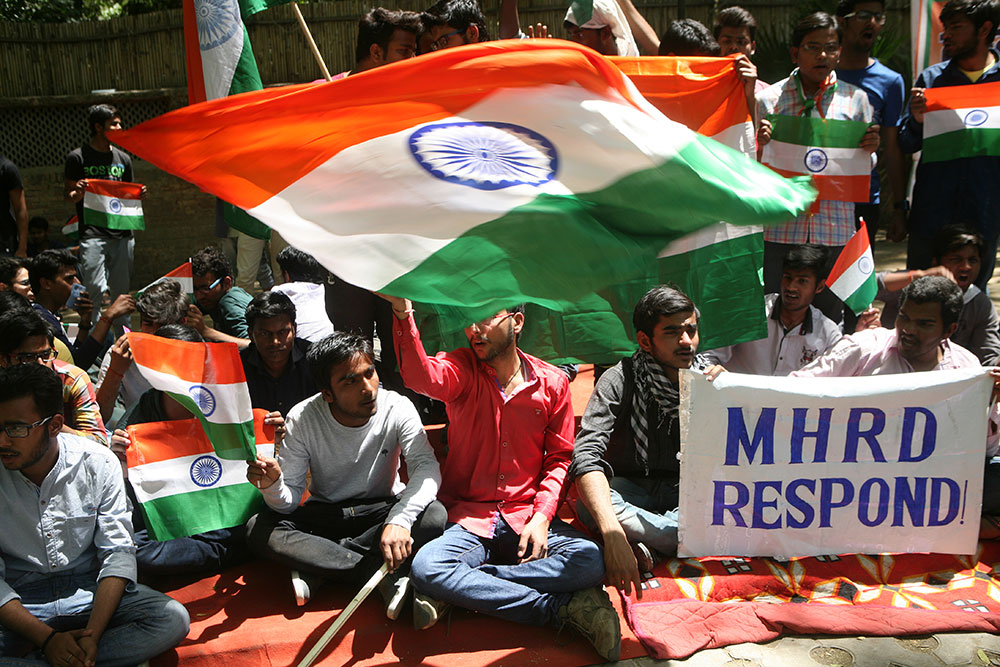 Non-Kashmiri students protest with the tricolour

The BJP, however, is unlikely to take heed as even its alliance with the PDP in the state pales in significance vis-a-vis electoral prospects across an India polarised over the Kashmir question. “This bec­ame clear in the way top functionaries of the central government were allowed to meddle in a situation that could have been handled better at the local level by the PDP-BJP government,” says Abir Bazaz, a US-based Kas­hmiri academician. As Ham­eeda, the English professor, puts it, “The biggest gainer in the NIT row is the RSS. They failed to draw much political dividend from the JNU controversy and want to make up for it in Kashmir.”

No matter who the winner is ultimately, there is little doubt about who turned out the biggest loser, thanks to a loud campaign by some Delhi-based TV channels against the J&K Police. Stran­gely, some media outlets with bureaus in Srinagar rushed reporters from Delhi to cover NIT. Even some Bollywood figures joined the chorus labelling the police an “anti-nat­ional force”. “Kashmiri cops have been rudely reminded that medals and money may be thrown at them liberally, but they would always be despised by their own people and derided by their masters in Delhi,” says journalism-graduate-tur­ned- businessman Adil Hamid Kaloo.

Justifying the police action against the non-Kashmiri students, former superintendent of police Israr Ahmad Khan says, “Had the police allowed the march, the protesters might have been attacked somewhere. And don’t forget, this is not the first time the police used batons on students. We do that to the local students too when they pose a threat to law and order.”

As we go to press, CRPF men are stationed inside the campus despite protests by Kashmiri students. And while it rem­ains as tough as ever for non-Kashmiri students to accept that no Kashmiri cheers for India, at the moment they seem rattled more by the action against them. “The way the police thrashed us can’t be forgiven,”  says a non-­Kashmiri student. “We don’t feel safe here and want NIT to be shifted elsewhere.” If nationalist ‘think-tanks’ see that prospect as a victory, they might as well pause to wonder: is it not a defeat really?