Is it Iran's turn now to be shocked and awed? Uncle Sam has some 'evidence'. 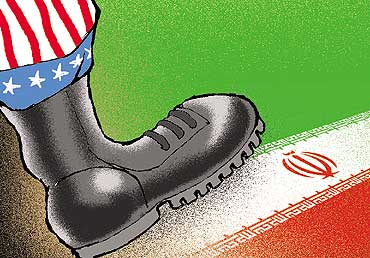 outlookindia.com
-0001-11-30T00:00:00+0553
First it was Iraq, then Syria. Now it is Iran. Ten days ago the US government 'cut off' all contact with Iran. This decision was based upon 'disturbing intelligence', based upon communication intercepts, that Al Qaeda executives in Iran had something to do with the suicide bombings in Saudi Arabia. From there things moved forward with blinding speed. Within hours the administration announced that it would hold a multi-departmental meeting on May 27 to decide whether or not to start a covert action to overthrow the current government in Iran. It postponed the meeting only when it heard that Iran had arrested a number of Al Qaeda operatives who had taken shelter there. But that did not stop White House spokesman Ari Fleischer from announcing that the US was not satisfied with Iran's 'cooperation' in this respect.

The postponement of the meeting has prevented, for the moment, the adoption of a National Security Decision Directive that would require the US to adopt a tough new confrontational approach towards Iran which would include sanctions. A draft executive order to this effect floating around in Washington has tried to make a case on the basis of 'intelligence' which shows that Iran is not far from developing nuclear weapons. In short, it must be stopped at any cost before it succeeds.

Does any of this sound familiar? It ought to, for this is exactly how the political campaign to plunge the US into a war against Iraq started 11 months ago. Iran has now been accused of all the three deadly sins that Iraq was supposed to have committed: it is developing and has a variety of weapons of mass destruction; it is sheltering terrorists and is therefore a state sponsor of terrorism, and it has been for years a major violator of human rights. For good measure, it is not even democratic. Iran thus meets all the criteria laid out in the US' new national security strategy to qualify for 'pre-emptive' attack and 'regime change'. Earlier, when Syria was allowing Saddam Hussein's men to take shelter in its territory, it too suddenly and without warning became guilty of these same deadly sins. Once it began to turn them over to the US, the 'sins' were quickly forgotten.

How good is the intelligence that is propelling these momentous decisions? As good as the intelligence on Iraq? If that is so, then American senators and Congressmen had better start asking the administration some pretty hard questions. For the volumes of so-called intelligence that both Britain and the US produced to justify the crime (in terms of international law) that they committed against Iraq turned out to be totally worthless. Three months of UN weapons' inspections based upon this intelligence produced absolutely nothing. More than two months of an almost frenzied search by usmovic, a team of no fewer than 1,000 to 1,200 American inspectors sent in during and after the war, has also produced, to quote one UN inspector, 'zilch'. A month ago, the US's ace team met Alpha claimed to have found a scientist who was showing them where Saddam's government had blown up and buried chemical and biological weapons, but the man turned out to be bogus and the most painstaking search unearthed nothing. Ten days ago, usmovic again unearthed something—this time two mobile laboratories that they claimed were biological agent manufacturing facilities.

The jury is still out on this one, particularly since the evidence, as The New York Times has pointed out, is virtually non-existent. But compare this to the absolute assurance with which Secretary of State Colin Powell told the UN Security Council before the people of the entire globe that Iraq had, at a conservative estimate, between 100 and 500 tons of chemical and biological weapons, enough to fill 16,000 rockets; 20 Al Hussein missiles capable of travelling 1,200 kms or more, and at least one drone (unmanned aircraft) capable of flying 500 miles non-stop, a large number of mobile laboratories and several underground factories, and one can see that even the discovery of two rusting laboratories that have clearly never been used cannot do much to salvage the reputation of the US and UK intelligence services. For none of these are exactly small items that can be hidden in the backyard of a private home, or even buried in the sand without leaving a trace. If they had existed, they would have been found long ago.

Yet, utterly unfazed by its exposure, the US administration—or to be precise, the neo-conservatives in the defence department—have begun the game all over again. The US won the Iraq war easily. It may win a war against Iran almost as easily. But what it has lost is incomparably more important and more precious. This is the moral leadership of the world. To use a term coined last August by Zbigniew Brzezhinski, former president Carter's secretary of state, America is perilously close to becoming a Global Gangster. We are all the losers from this, because as he also pointed out, "without a respected and legitimate law enforcer global security could be in serious jeopardy." The emphasis is entirely mine.